Bad Weather Is Hampering the Recovery of AirAsia Bodies

Members of an Indonesian search and rescue team carry the body of a victim of the AirAsia flight QZ8501 crash from a USS navy helicopter at Iskandar Airbase on January 02, 2015 in Pangkalan Bun, Central Kalimantan, Indonesia.
Ulet Ifansasti—Getty Images
By Charlie Campbell

The first identified victim of AirAsia Flight QZ 8501 has been laid to rest, but the agony continues for most families as officials say it may take another week for the wreckage to be found, with tempestuous conditions hampering the recovery of remains.

Hayati Lutfiah Hamid, 49, was buried on New Year’s Day, surrounded by friends and family in the village of Sawotratap, a few kilometers outside Indonesia’s second city of Surabaya, from where the doomed Airbus A320-200 departed early Sunday bound for Singapore.

But three members of her family who were with her on the plane still have not been identified.

“Their house has been in a panic since Sunday,” a neighbor named Umaroyah told Reuters. “Everyone in the neighborhood knows someone who was on that plane.”

On Friday, three more of the 22 bodies so far recovered were identified. They were Kevin Alexander Soetjipto, an alum of St. Albertus Catholic high school in Malang; Grayson Herbert Linaksita, a resident of Surabaya; and flight attendant Khairunnisa Haidar, 22. All four identified to date are Indonesian nationals.

AirAsia CEO Tony Fernandes tweeted Friday that he would accompany his crew member’s remains to join their families. Palembang is Khairunnisa’s hometown.

F.H. Bambang Soelistyo, the head of Indonesia’s National Search and Rescue Agency (Basarnas), told a press conference Friday in Jakarta that the priorities today are to find the body of the plane and the black box in addition to the search and recovery of the bodies.

However, waves of up to 4 m (13 ft.) on Friday meant that the 47 divers charged with finding more of the 162 passengers and crew were struggling to work.

Some 29 ships and 17 aircraft are busy scouring the busy Karimata Strait for wreckage. Reports on Wednesday that the plane had been found on the seabed seem to have been premature, but the search area Friday was whittled down to around 1,575 square nautical miles.

This is was significantly reduced from Thursday’s search zone of some 13,500 sq km — roughly the size of Connecticut.

According to David Newbery, a Hong Kong flight captain and accredited aircraft-accident investigator, “The spot where the plane vanished from radar simply represents when there was a power interruption to the electronics. An airplane without any engines could glide for over 100 miles from 32,000 ft.”

Basarnas says it will speed up sending recovered bodies from Pangkalan Bun, in Central Kalimantan province, to Surabaya, in East Java, to minimize further deterioration. “As soon as the bodies arrive in Pangkalan Bun, we will evacuate them to Surabaya because we are worried the [local] hospital isn’t sterile,” the Basarnas operational director S.B. Supriyadi told reporters Friday in the Central Kalimantan town.

He later added that eight bodies had now been sent Surabaya, 10 were in the hospital at Pangkalan Bun and four were aboard a search vessel.

Forensic attempts to identify one of those recovered have already proved problematic, because fingerprints are inconclusive after bodies have been exposed to seawater for so long. Other identification methods, such as dental records and DNA, take much longer to process, meaning there’s a race against time for families to gain much needed closure and perform funeral rites.

Finding the data recorders, colloquially known as black boxes, is crucial to determining what made the single-aisle, twin-engine jetliner crash. Latest analysis of radar signals indicate the plane may have made an extremely steep climb and descent, possibly because of severe weather. 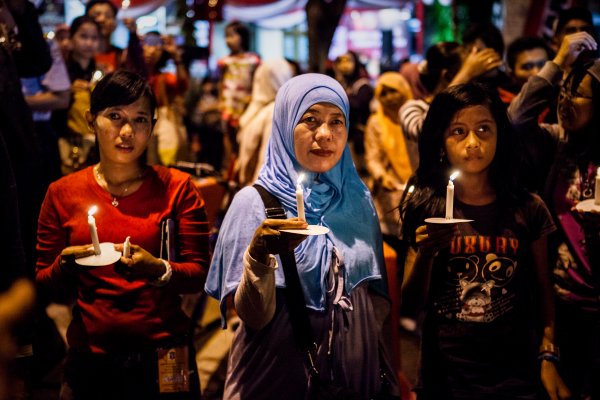 New Year of Grief for Bereaved
Next Up: Editor's Pick