PASADENA, Calif. — Oregon won the first College Football Playoff game and clinched a spot in the national championship with a 59-20 Rose Bowl victory that snapped Florida State’s 29-game win streak. With the victory, the Ducks advance to face the winner of the Sugar Bowl in Arlington, Texas, on Jan. 12.

1. The Ducks routed the Seminoles with more than a quarterback

Oregon quarterback Marcus Mariota won a clash of the two most recent Heisman Trophy winners on Thursday, but Mariota also had a better supporting cast than the Seminoles’ Jameis Winston. Florida State may have more players drafted into the NFL, but the Ducks made critical plays when they needed them. Florida State, which lived dangerously all season but still won 13 games, could not mount one of its trademark second-half comebacks because the Ducks simply answered and then some every time the Seminoles scored.

Oregon refuted the notion it’s a finesse team by pressuring Winston, manhandling Florida State’s receivers and bruising the Seminoles up the middle with 229-pound freshman tailback Royce Freeman. Freeman finished with 12 carries for 44 yards with two touchdowns, while Mariota threw for 338 yards with two scores and one interception. Mariota also ran for 62 yards and a touchdown. Winston finished with 348 passing yards, one touchdown, a pick and a critical fumble.

2. The wheels came off for the Seminoles in the third quarter

Each team gained 208 yards in the third quarter, but Oregon outscored Florida State 27-7. Florida State freshman tailback Dalvin Cook, who was critical in several of the late-season comebacks that allowed the ‘Noles to enter the Rose Bowl undefeated, lost a pair of fumbles. Oregon turned both into touchdowns.

Later, Winston did this.

Oregon linebacker Tony Washington returned that fumble 58 yards for a touchdown. Florida State would not mount a comeback after that.

Oregon looked like it would have trouble defending Seminoles receiver Rashad Greene after All-America cornerback Ifo Ekpre-Olomu tore his ACL in practice late last month. But Troy Hill did a fine job on the senior, who holds Florida State career records for catches and receiving yards. Through three quarters, Greene had five catches for 43 yards. The Ducks had a 25-point lead.

Hill and the Ducks will get one more game to add to their career totals. Greene and the Seminoles will not. With the loss, the often-brilliant, often-controversial college career of Winston is likely over. He has two more seasons of eligibility remaining, but he is expected to declare for the 2015 NFL draft. In the next few months, he’ll duel with Mariota again to see which quarterback is selected first. 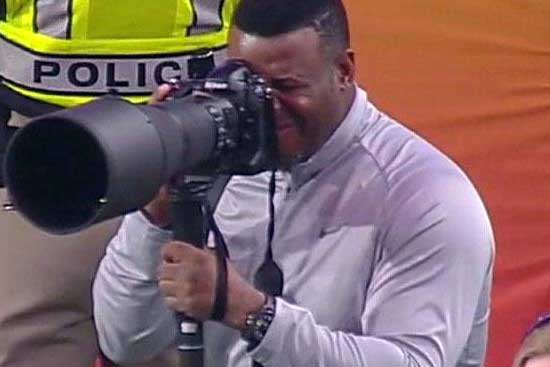 Ken Griffey Jr. is Now a Professional Photographer
Next Up: Editor's Pick