Emma Watson and Ban Ki-Moon attend the launch of the HeForShe Campaign at the United Nations in September of 2014 in New York.
Steve Sands—WireImage/Getty Images
Ideas
By Cathy Young
Cathy Young is a contributing editor at Reason magazine.

Was 2014 the year feminism won the gender war, or jumped the shark? One could say it has had a pretty good year, with celebrity endorsements from the likes of Beyoncé Knowles and Emma Watson and with gender issues often dominating the news.

And yet all too often, the publicity backfired.

The campaign to nix the word “bossy” as a putdown of assertive girls was criticized and mocked not only by conservatives but by liberal and left-wing feminists. The #YesAllWomen Twitter hashtag created in response to Elliot Rodger’s shooting spree and his YouTube rants about female rejection elicited a groundswell of sympathy for women’s stories of violence and sexism—but also unease from pro-feminist men and women who felt all males were being unjustly shamed. A social media group called Women Against Feminism sprung up, many of its members stressing that they were for equality but against male-bashing, gender warfare, and contempt for traditional choices. Even the movement to curb sexual assault on college campuses faltered late when diverse critics voiced concerns about the rights of the accused—while the unraveling of a sensational magazine account of fraternity rape exposed the troubling zealotry of advocates for whom believing rape claims is somewhat akin to a matter of religious faith.

Do we still need feminism in 2015 and beyond—and if so, what kind? Advocacy for women’s basic rights clearly remains an urgent issue in many places around the world. Even in the United States and other advanced democracies, a movement for gender equality still has valid issues to address. Here are a few guideposts to keep such a movement from turning irrelevant, toxic, or both.

Intellectual diversity is important; labels are not. Some leading feminists are so concerned with ideological purity that they fret over too many people embracing the term while failing various litmus tests. But supporting feminism, in its dictionary sense of the equality of the sexes, doesn’t bind you to any particular position on gun control, capitalism, or the environment. Even respectful dialogue with people who consider themselves pro-life feminists would benefit both sides.

Conversely, if some people are pro-equality but won’t call themselves feminists because of they don’t like the word’s connotations, chastising them or explaining why they are “really” feminists is unhelpful and arrogant. Feminists, humanists, egalitarians, even (gasp!) men’s rights activists—why not work with anyone who shares one’s overall goals? A gender equality movement can only have a future if it’s a big tent.

Equality should not mean that men and women must be identical in everything—it should mean treating people as individuals regardless of their gender. Too often, the debate about biology and gender pits dogmatic denial of any innate behavioral or psychological differences between the sexes against broad Mars-versus-Venus stereotypes and claims that traditional sex roles are nature’s way. It’s entirely possible that even absent any gender-specific social pressures, women would be much more likely to become full-time parents, nurses, or kindergarten teachers, while men would be much more likely to become CEOs, professional athletes, or engineers. But while many differences in personality traits and cognitive patterns may be innate, they are tendencies, not absolutes. Flexibility is part of human nature, too; and, just as many feminists exaggerate the role of socialization, many conservative critics of feminism underestimate the impact of cultural biases. We can work to reduce such biases and ensure that nontraditional choices are not stigmatized or discouraged—without demanding 50-50 parity in everything.

The other side of sexism must be recognized. Former Jezebel editor Lindy West has argued that such “men’s rights” problems as unequal treatment of fathers in family courts or bias against male domestic violence victims are rooted in patriarchy and that feminism is already addressing them. Unfortunately, facts say otherwise. On these and other issues, feminist activists and commentators have tended to side with women, oppose measures to help men, and promote women-as-victims, men-as-bad-guys narratives. Such double standards need to be confronted.

Despite protestations that feminism helps both sexes, West and many others also claim that our society systematically empowers and advantages men at women’s expense. This is a gross distortion of contemporary Western reality. Biases rooted in traditional norms affect both sexes (and are perpetuated by both sexes). Women may get less support for pursuing high-paying careers; men have less leeway to choose fulfilling but lower-paying work. Women may be unfairly stereotyped as weaker; men, as more violent. While British feminist writer Laurie Penny asserts that our culture “hates women,” researchers including feminist psychologist Alice Eagly find that if anything, both sexes view women more favorably than men.

The perception of pervasive, one-sided male power and advantage can create a disturbing blindness to injustices toward men—even potentially life-ruining ones such as false accusations of rape. A true equality movement should address all gender-based wrongs, not create new ones.

Justice knows no gender—and demands concern for both accuser and accused. There is a real history of legalized sexism toward women seeking recourse for sexual and domestic violence. But achieving justice in cases that hinge on conflicting and often ambiguous accounts is an extremely difficult balance. Choosing sides on the basis of gender is textbook sexism—and insisting that women are entitled to belief is a feminist version of the old-fashioned pedestal.

The personal is not always political. Men behaving badly to women in personal relationships—unless such behavior has social and institutional support—is not necessarily a gender issue. Neither gender has a monopoly on insensitivity, rudeness, manipulation, dishonesty, or entitlement. What’s more, policing relationships in the name of ideology—for instance, trying to dictate how people should express consent to sex—is always a bad idea. Let us by all means have a conversation on changing sexual norms; but this can be done without using coercion and penalties to enforce someone’s version of healthy interaction, or focusing almost exclusively on male mistreatment of women.

A narrative is only as good as its facts. From “women earn 77 cents to a man’s dollar for the same work” to “one in five college women are sexually assaulted by graduation,” a number of statistics commonly used by women’s advocates have withered under scrutiny. So have some recent tales of alleged misogynist infamy, such as the University of Virginia gang rape and cover-up or the supposedly sexist firing of New York Times editor Jill Abramson. Too often, the feminist response to such debunkings has amounted to declarations that the big picture matters more than specific facts and figures. But the big picture had better be made up of accurate details. Campus rape certainly happens; so does workplace sexism. But addressing real problems requires solid research and reporting. We badly need more of both when it comes to gender issues.

Trivial pursuit is not the path to equity. Feminism is now battling the alleged scourge of men who take up too much space on public transit by spreading their legs? Not only is this selective male-shaming (social media users quickly noted that female riders are guilty of different-but-equal sins), it is also a comically petty grievance that could suggests the aggrieved have no real issues. Half of successful advocacy is knowing to pick one’s battles.

The biggest unfinished business of gender equality in the West is “work-life balance” and caregiving. This point was eloquently made by Judith Shulevitz in a recent New Republic debate on feminism’s future. Whatever role discrimination may play, childbearing has a major effect on gender disparities in career achievement. Even women who are satisfied with these trade-offs often feel the conflict acutely. But this tension is not just a women’s issue. In a Pew poll last year, almost as many working fathers as working mothers (50% versus 56%) said it was it difficult to balance work and parenthood. Overall, twice as many fathers as mothers—46% versus 23%—felt they spent too little time with their children.

Like many feminists, Shulevitz sees mainly government solutions. Others would counter that the flexibility and creativity of markets and civil society offer far better answers. But this is the kind of debate people should be having in the big tent of a true equality movement.

Could such a movement get its start in 2015? In the waning days of 2014, it looks like an idea whose time has come. 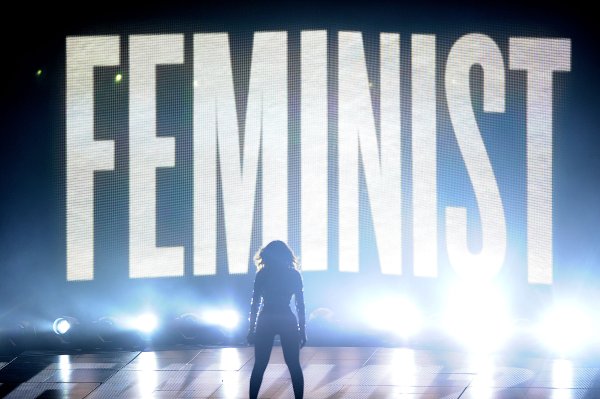 2014 May Have Been the Best Year for Women Ever
Next Up: Editor's Pick