More Bodies Are Being Recovered From the AirAsia Disaster

A government official, left, tries to calm a family member of passengers on board AirAsia Flight QZ 8501 at a waiting area in Juanda International Airport in Surabaya, Indonesia, on Dec. 30, 2014
Beawiharta—Reuters
By Charlie Campbell and Yenni Kwok

Seven bodies from AirAsia Flight QZ 8501 have now been recovered from the waters off Indonesian Borneo, including one in a trademark red flight-attendant uniform, as friends and relatives of those who were on the ill-fated Airbus A320-200 struggle to come to terms with the fact that all 162 passengers and crew are presumed dead.

It has emerged that many of the passengers who boarded the flight that left Surabaya’s Juanda International Airport for Singapore early Sunday morning — only to vanish from radar 42 minutes after takeoff — were ethnic Chinese families going on year-end holidays to a destination highly popular with Indonesian Chinese.

The victims included one student and seven graduates of St. Albertus, a Roman Catholic high school in Malang, a town near Surabaya, according to Anne-Marie, a member of the school’s alumni association. The group was traveling with family members. One of them traveled with her fiancé — the two planned to marry next year — his mother and father, who was also an alumnus.

“Many are shocked,” Anne-Marie tells TIME. “Especially because all of them died with their families too.”

The Jawa Pos, a regional newspaper, reported Wednesday that in total 35 residents of Malang had been lost in the disaster.

Officials have meanwhile pinpointed the location of the wreckage on the bottom of the Java Sea, their search greatly aided by two fishermen who brought recovery teams to waters where they said they saw and heard an explosion on Sunday.

Bodies were first spotted about 100 miles (160 km) from Central Kalimantan province, in southern Borneo. A sonar scan later uncovered what is now understood to be the fuselage of the plane on the seabed.

Poor weather is hampering efforts to recover more victims. Lashing rain has stirred up sediment in what is already murky water, and salvagers must sift through a large volume of assorted flotsam — such as discarded fishing nets, shipping refuse and plastic waste — from this busy maritime thoroughfare in order to recover parts of the aircraft.

Working in their favor, however, is the shallowness of this part of the Java Sea — around 100 ft. (30 m). The search for the sunken flight data recorder can be simply conducted by divers using hand-held locators instead of submarines. There is also the likelihood that debris will not have spread far.

“When a plane hits the sea it’s quite normal to get a minimal amount of floating wreckage and for it to be quite concentrated,” David Newbery, a Hong Kong flight captain and accredited aircraft-accident investigator, tells TIME.

Indonesian President Joko Widowo said Tuesday that the priority would be the recovery of bodies from the stricken aircraft. After that, crash investigators will have to piece together what exactly caused the plane to come down, with bad weather still presumed to be a contributing factor.

“To the family members, I feel your loss in this tragedy,” he told those gathered at the Surabaya airport late Tuesday. “I pray you find the strength and will to face this challenging time.” On Wednesday, he issued a national call for restrained New Year celebrations in the wake of the disaster.

Ujang Iskandar, the district chief overseeing Pangkalan Bun, the Central Kalimantan town nearest to where bodies and wreckage were seen, has issued an order banning “noisy parties, music and fireworks” out of respect for the AirAsia victims, and will also lead an interfaith-prayer gathering. 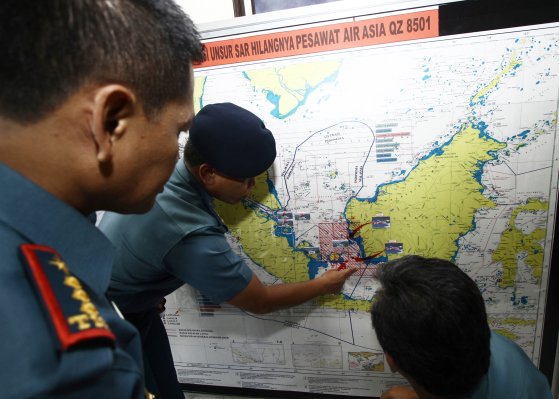 Why GPS Can't Find the AirAsia Jet
Next Up: Editor's Pick