Most Cancer Is Beyond Your Control, Breakthrough Study Finds

There’s a lot we can do to protect ourselves from certain cancers — don’t smoke, avoid prolonged exposure to the sun, and try not to breathe or ingest too many chemical pollutants in the air or our food. But scientists have always known that this was only part of the cancer story. There’s also heredity, but that only explains about 5% to 10% of cancer. The truth of the matter is that some tumors emerge simply at random. But how much of malignancy can be attributed to this unfortunate roll of the dice? What really causes cancer?

Christian Tomasetti and Bert Vogelstein at Johns Hopkins University believe they may have found an answer, and it’s likely to turn our understanding of cancer — and how it should be diagnosed and treated — on its head. In a groundbreaking paper published in Science, the duo describe a new factor, a tissue’s stem cells, that may explain as much as two-thirds of the difference in cancer risk among different tissues.

Many tissues in the body have stem cells that serve as factories for churning out more cells of the same kind; it’s what keeps our skin cells refreshed, and our blood and immune cells young and vigorous. This replicative power is the engine that keeps the body going, allowing tissues to replace cells as they die off. But it’s also the process behind cancer, since cancer is caused by cells that pick up mutations in their DNA when they divide — and stem cells are the only population that copy their DNA and divide to make more cells. Only a small proportion of a tissue’s cells are made up of stem cells, so Tomasetti and Vogelstein decided to map out whether the number of stem cells in a specific tissue bears any relationship to its tendency to develop cancer.

Indeed, when they charted out the stem cell data for 31 types of tissues, they found a dramatic connection between the two — the more stem cells the tissue had, the higher its incidence of cancer over a person’s life time on average. “Think of cancer as the risk of having an accident if you are driving a car,” says Tomasetti, a biostatistician who holds positions in the department of oncology at Johns Hopkins Kimmel Cancer Center and the Johns Hopkins Bloomberg School of Public Health. “If you drive the car on a cross country trip, your risk of an accident is much higher than if you take a local trip to the grocery store. The risk correlates to the length of the trip. The trip to the grocery store might be thought of as bone cancer, which has few stem cell divisions. While the cross country trip might be more like colon cancer, which has many more cell divisions.”

In fact, the correlation held strong among cancers that were both common and more rare. The more likely those cells would divide and develop DNA errors or mutations in the process that led to uncontrolled growth, the more likely that tissue would develop tumors.

“It was quite surprising to us. We think it’s pretty big,” he says. “About 65% of cancer incidence across tissue types appears to be explained by the number of stem cell divisions.”

Having a detailed understanding of both how large a tissue’s stem cell population is, as well as how active it is, could be a determining factor in whether it’s likely to develop cancer. Both the brain cells that can cause glioblastoma and medulloblastoma, and the colon contain about the same number of stem cells, Tomasetti estimates — about one hundred million. But the colon stem cells divide about 6000 times on average during lifetime, compared to nearly zero for the brain stem cells. That leads to rates of colon cancer that are 22 times higher than rates of the brain tumors.

Such an explanation could also resolve some of cancer’s mysteries — why people who don’t smoke still get lung cancer in surprising numbers, or why rates of colon cancer are higher than rates of cancer in the small intestine, despite being shorter in length. One reason, says Tomasetti, could have to do with the different stem cell activity in these tissues.

This finding potentially changes the landscape of cancer. In recent decades, cancer rates have come down due to aggressive efforts to educate and motivate people to take positive steps toward preventing cancer in the first place, such as quitting smoking and avoiding the sun’s ultraviolet rays. Have those messages been wrong?

Not exactly. Tomasetti says that the study shows that it’s time to redirect that cancer strategy a bit — not abandon it. For example, he and Vogelstein propose looking at cancers in two categories, those that are primarily due to genetic bad luck, and those that are due to that unfortunate roll of the genetic dice plus environmental or hereditary factors. So melanoma, ovarian cancer, many brain cancers, lung cancer among non-smokers, the most common leukemias and bone cancers, for example, are pretty much out of people’s control. They’re the result of the random mutations caused by the stem cells dividing in these tissues — bone, blood, ovaries, brain and skin — that make mistakes that turn malignant. For these cancers, changing your lifestyle or trying other interventions to stop the cancer from occurring in the first place won’t help. But being vigilant about screening, and picking up the first signs of trouble early, can be life saving.

For the other type of cancers, those that are the product of both stem cell mutations and heredity or other exposures, continuing with proven prevention methods, which include screening in cases of inherited disease, as well as quitting smoking and reducing exposure to radiation and carcinogens, is still critical. That’s what has lowered rates of lung cancer among smokers, for example, and colon cancer among those with hereditary disease.

“Everything we know about altering lifestyles to prevent cancer from the environmental point of view we absolutely need to continue doing,” says Tomasetti. “If anything it puts more stress on the need to spend even more money on early detection. It may be the key tool for quite a few cancer types.”

Tomasetti admits that two common cancers are missing from the study — breast cancer and prostate cancer. That’s because knowledge about their stem cell populations, and how often those tissues renew, isn’t quite as solid as it is for tissues such as colon. “We are working on that,” he says. “We hope this type of work highlighting the importance of self renewal will cause others to investigate these stem cell populations in more detail as well.”

In the meantime, he stresses that while we may not be able to prevent the tumors from forming, it’s still possible to treat them and potentially save lives by finding them early and removing them or using chemotherapy or radiation to keep them under control. “My biggest fear is that people will say forget about it, and then do nothing. The opposite is true. We need to do everything we did before, but we want to do it even more than before,” he says.

Read next: Your Chances of Surviving Cancer May Depend on Where You Live 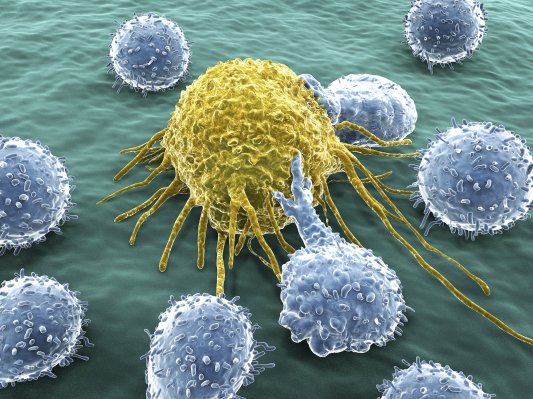 Most Types of Cancer Just 'Bad Luck,' Researchers Say
Next Up: Editor's Pick