Are Commercials More Deceptive Than Ever?

While preparing dinner, I often watch CNN. And when commercials come on, I typically look away or turn off the TV. But recently I happened to notice the commercials…with concern.

The first thing I noticed was that there are more commercials than I had recalled. It turns out I’m right. There are 22 minutes of commercials per hour, up from 9 minutes in the 1960s, according to DimensionsInfo, a website that aggregates measurements. CNN’s appears to be in that range: Here is a one day’s CNN programming and commercial schedule.

The commercials seem even more unfair to consumers than I had recalled. For example, many had lots of fine print—on-screen for so short a time that only a speed reader could read, let alone comprehend, it. For instance, consider this commercial for Prevagen. The announcer and the large text says, “Can a protein originally found in jellyfish improve your memory? Our (emphasis mine) scientists say YES! (emphasis theirs).” But at the bottom of the screen in small print in a dull color, it says, “These statement have not been evaluated by the Food and Drug Administration. This product is not intended to diagnose, treat, cure or prevent any disease.”

Then there’s the fine print in this commercial for the drug Chantix (Verenicline,) Pfizer’s smoking cessation drug. Most of the screen time consists of reassuring pictures of the happy ex-smoker. I could only read the small print because I was able to dig up the commercial online and could keep pausing it until I could read all the text:

Some people had changes in behavior, thinking, or mood, hostility, agitation, depressed mood and suicidal thoughts or actions while taking or after stopping CHANTIX (emphasis theirs.). If you notice any of these, stop CHANTIX and call your doctor right away….Tell your doctor about any history of mental health problems, which could get worse while taking Chantix. Don’t take Chantix if you’ve had a serious allergic or skin reaction to it. If you develop these, stop Chantix and see your doctor right away as some can be life-threatening. Tell your doctor if you have a history of heart or blood vessel problems or if you develop new or worse symptoms. Get medical help right away if you have symptoms of a heart attack or stroke. Use caution when driving or operating machinery. Common side effects include nausea, trouble sleeping, and unusual dreams.

Lest you think that only drug companies produce unfair commercials, this Cartier watch commercial–which doesn’t disclose their prices but instead presents a fantasy hypertechnical manufacturing process made to look like a Hollywood movie–implies their watches are technically advanced. In fact, half of Cartier watches use an old-fashioned mechanical movement that in general is less accurate than a $20 quartz-movement Casio or Timex. And unlike quartz watches, mechanical ones, including Cartier’s, require periodic servicing. How much do Cartier watches cost? A visit to Tourneau.com, a major retailer of Cartier watches, finds they range from $2,680 to $59,000. And that understates the case. TheRichest.com reports that the 10 most expensive Cartier watches range from $164,000 to $2.76 million. But, if you buy direct from Cartier, you do get free gift wrapping.

Then there’s a commercial for Volkwagen Jetta, which describes the car as “German engineered.” But Volkswagen of North America’s home page for Jetta uses the phrase “German craftsmanship.” In fact, according to Road and Track, the Volkswagen you’ll buy is probably made by Volkswagen de Mexico.

More important, even if you meet the “terms and conditions of Liberty Mutual’s underwriting guidelines,” Liberty Mutual’s rates could be higher than other insurers. In fact, when ValuePenguin.com, an independent value assessment service, compared the price of Liberty Mutual with Allstate and GEICO, for all three categories of drivers compared (only Boston was studied), Liberty Mutual costs thousands of dollars more.

Another Liberty Mutual ad on CNN said, “Switch and you could save up to $423*.” In much smaller type, the asterisk says “Savings may vary.” Indeed they may. Liberty Mutual’s statement says nothing about its actual rates. Sure, if you switched from an extraordinarily high-priced insurer, you may save something, perhaps $1, perhaps even $423. But as mentioned, Liberty Mutual’s pricing appears, if anything, to be high. Note their use of the phrase, “Switch and you could save…” But people rarely switch to get a higher rate. That bogus statistic wouldn’t count all the people who thought about switching to Liberty Mutual but found the price higher. The relevant pricing question is simply, “Which insurance company has the best rates?” And regarding that, it appears the Liberty Mutual’s ad is grossly misleading.

Of course, Liberty Mutual isn’t the only insurance company to use the “Of those who switch” ploy. For example, the friendly sounding announcer in a 21st Century Insurance commercial, with a perky jingle in the background chirped, “Drivers who switched saved an average of $550 a year.” The screen said in small print “From Progressive.” But what about those who didn’t switch or who get insurance from higher-rated and lower-cost providers such as USAA and Amica? In small print in a hard-to-decipher color, it reads, “National average of annual savings developed from information provided by new policy holders from 1/11/11 to 12/31/11.” Isn’t it likely that those who responded had greater savings than the average person who inquired? And 21st Century chose a study period that’s three years old. I wonder what more recent results would be.

In other words, 31% of T. Rowe Price funds performed worse than average. Well, at random, 50% would. That’s hardly a ringing endorsement. More troubling, buried amid that fine print are “Results vary with period.”

In fact, according to Morningstar, an independent investment rating service, over the last five years, T. Rowe Price’s weighted average annual return is less than 1% above benchmark.

Space precludes my describing all the deceptive commercials I watched during my brief period of watching commercials on CNN. I’ll simply list three more quotes. You’ll get the point:

Receive up to $500 cash back on Electrolux.

Joseph A Bank: Selected suits are 70% off.

These are merely what I saw in watching an hour of CNN, a station that gets a more sophisticated viewership than do some other channels. I can only imagine the deceptions on other stations.

Government should be much tougher on advertisers. In the end, like with many people, does it all come down to the almighty dollar?

What can we as individuals do? If text in a commercial—online as well as TV–is not readable or a print ad contains similar fine print, that material is probably something the company doesn’t want you to know. That’s not the sort of company I’d want to patronize. Might you want to look for a competitive product that doesn’t require such obfuscation?

And of course, there’s the time-honored general warning, perhaps more important than ever: Caveat emptor–let the buyer beware. 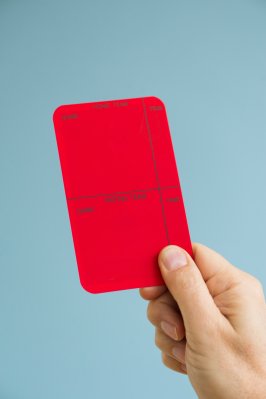