Are We More Like the Roman Empire than We Care to Admit?

The world history that is often taught is a story of great empires, leaders and their intentions. But there is another history to be written of the long lasting effects of the trauma caused by those same empires—Babylon, Rome, and others. Western culture, especially Western religion, is not just the product of great thinkers and religious leaders. It is also deeply shaped by traumas inflicted by long dead imperial powers.

The Bibles of Judaism and Christianity bear the imprint of such traumas, and they bear it as much in what they avoid talking about as in what they explicitly describe. The Old Testament contains a history extending from creation up through the origins of Judaism. Yet it omits explicit description of a crucial fifty-year span when the founders of Judaism were in exile in Babylon (587-538 BCE). Babylon had destroyed the holy city of Jerusalem and burned its temple. The Babylonians exiled thousands of the surviving inhabitants of Judah, forcibly resettling them hundreds of miles away in Babylon.

It was during this time, when these Israelite exiles were displaced from their own land, that they came to focus on stories of landless ancestors like Abraham and Moses, stories that now form the core of the present Torah. That Torah, a Bible for exiles, became the centerpoint of the Jewish Bible and the start of the Christian Bible. These returnees from exile formed a resilient religion, Judaism, that has survived thousands of years. Meanwhile, the famous texts of the once-powerful Babylonian empire were lost in the sands of the Middle East, only to be recovered millennia later by scholars of antiquity.

The New Testament revolves around a different trauma, the crucifixion of Jesus of Nazareth. The Romans crafted crucifixion as a form of shaming torture and public death. They would leave leaders of rebel movements to die and rot at a major crossroad to dispirit and scatter their followers. The gospels record that Jesus was crucified with a sign “king of the Jews” above his head as a mark of the charge that he was just such a leader, and this crucifixion was felt as a mark of shame for decades. Years later Paul reported that Jesus’s crucifixion “is a stumbling block to gentiles and a folly to Jews” (1 Corinthians 1:23), and the earliest account of Jesus’s crucifixion, found in the gospel of Mark, ends with women fleeing from his empty tomb “because they were afraid.” It was left to later gospels, Matthew, Luke-Acts and John, to balance the horror and terror of Roman crucifixion with accounts of Jesus’s resurrection and the development of the early church.

In the end, the Romans did not end the Jesus movement, but were overtaken by it. Four centuries after Roman soldiers hung Jesus on a cross and mocked him, the emperor of Rome was himself Christian and Christianity was the religion of the empire. Members of the Christian church now wear the cross as an emblem of their belonging in a faith where all are called to “take up the cross and follow” Jesus.

These examples show the long-term limits of the exercise of imperial power. At one time Babylon’s armies could overrun Jerusalem and other nations. Five hundred years later Rome likewise exerted powers of extreme violence. The effect of Babylon and Rome’s overwhelming power, however, was not eternal dominance, but millennia-long trauma. The world is still haunted by the cries of Judeans from Babylon and of Jesus from the cross, and it is still shaped by ideas—monotheism, chosenness, martyrdom—formed in the crucible of such experiences.

As the sole superpower today, the United States echoes Rome in its use of air power, drones and torture to intimidate and overwhelm its opponents. With violence closer to home, the United States echoes Babylon in its imprisonment of millions of its own citizens, with an average of 1 in 3 black males imprisoned at one point in their lifetime (according to an August 2013 report to the UN by the Sentencing Project).

These measures are justified as fights against “terrorists” abroad or anti-crime/anti-drug campaigns at home. Both create a well of enduring trauma among neighborhoods and families who have lost loved ones to attacks, kidnapping or imprisonment. The US has long seen itself as a beacon of democracy and economic opportunity. Its reliance on violence to address problems now makes the US ever more an emblem of terror and death.

What long lasting effects will there be from traumas inflicted on individuals and communities by wars abroad and at home (the “war on drugs”)? Given the history reviewed here, one might hope that some communities might forge some good out of traumatic suffering inflicted on them now. At the same time, one might ask, does the United States want to be remembered like Babylon or the Roman “whore Babylon” whose destruction is predicted in the biblical book of Revelation? What will America’s long-term legacy be?

The American system of democracy offers an opportunity to shift course in these matters, and the American people can be guided by the best ideals of religions shaped by past traumas. The New Year often marks a time when individuals evaluate the past year and make resolutions about the new one. Perhaps the turn to 2015 could also mark the beginning of a national process of reflection on the effects of widespread institutionalized violence and a search for viable alternatives.

David Carr, Professor of Old Testament/Hebrew Bible at Union Theological Seminary in New York, is the author of “Holy Resilience: The Bible’s Traumatic Origins,” which was just published by Yale University Press. 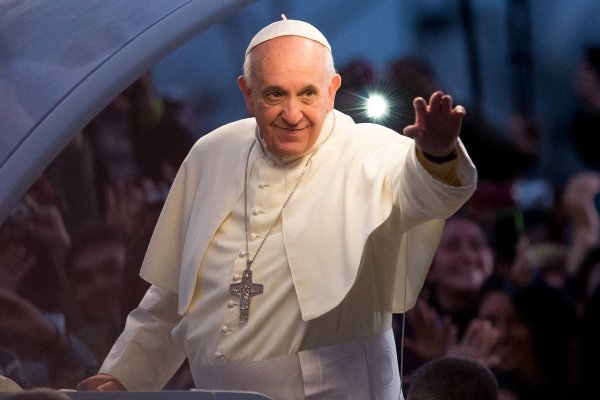 If Pope Francis Wrote Your New Year's Resolutions
Next Up: Editor's Pick