How BlackBerry Could Survive Another Year

The BlackBerry Ltd. Classic smartphone is displayed for a photograph during an event in New York, U.S., on Wednesday, Dec. 17, 2014.
Bloomberg—Bloomberg via Getty Images
By Kevin Kelleher

John Chen isn’t a CEO plagued with doubt. That’s an essential quality for anyone who has taken on the formidable task of turning around around BlackBerry — but Chen also lacks the rose-colored optimism of some turnaround CEOs who, quarter after quarter, plead with investors for just a little more time.

Chen’s leadership more than anything is keeping investors from giving up on BlackBerry. When the company reported its latest quarterly earnings Friday, its stock fell 10% for an hour or two, but by the end of the day it was unchanged on the day. The stock has risen another 8% since then.

The initial selloff was triggered by revenue numbers well short of analysts’ expectations. Revenue from devices like the recently launched BlackBerry Passport fell 24% to $361 million. Even worse, revenue from mobile service subscriptions fell 42%, to $368 million. Software, seen as the company’s best hope for growth fell 4% to $54 million.

The stock didn’t begin its slow comeback until Chen took to the phone to discuss the company’s results. Chen said BlackBerry’s revenue figures were “not satisfying,” but he explained that the average selling price of $182 per device — well below expectations — was due to the company purging its inventory of older devices. The good news: BlackBerry’s cache of older models has fallen 93% in the past year.

BlackBerry sold 1.9 million devices in the quarter, shipping only 200,000 units of its new Passport. But a backlog of orders meant many Passports won’t be recognized as sales until this quarter. Chen also said that early orders for the BlackBerry Classic – with new technology stuffed into a familiar design – are already surpassing the Passport’s early demand.

BlackBerry’s decline in services revenue, however, is a long-term drain that the company has little chance of stopping. Carriers once paid BlackBerry to manage secure email and messaging, but now they can handle that themselves. So BlackBerry is now pushing software like BES12, a mobile platform aimed not at consumers but banks, healthcare companies and governments.

Many of those companies favor the mobile security that BlackBerry has long offered, something that may grow more attractive in the wake of several recent high-profile corporate hacks. Chen has said BlackBerry will double its software revenue, which currently stands at around $250 million annually, in the coming year.

Investors have had faith in BlackBerry even as they despaired over its future because Chen has been consistent with his bold predictions, rather than kicking the can of a promised turnaround down the road — a year ago, Chen said the company would be profitable by 2016.

Still, there’s a long way to go. By one measure, BlackBerry posted a profit of a penny per share last quarter. But by another count, BlackBerry saw a 28 cent loss. The company has to prove it can sustain any profit just by growing its revenue. One key measure suggests it might: the company turned its cash flow positive (meaning it’s generating money rather than burning through it) last quarter, one quarter earlier than it projected.

Those metrics are meaningful in that Chen’s restructuring of BlackBerry has been a two-part plan: Cut costs and eliminate older, unwanted businesses to become profitable and cash-flow positive. After that, Chen’s plan will be to drive revenue growth with new devices and software.

The last year has seen the first phase of that plan roll out quickly: BlackBerry cut its workforce by 40%, then told workers in August it was finished with layoffs. It outsourced manufacturing and refocused on the enterprise market. And its success in clearing inventory of old models means an increased average selling price in future quarters should increase profit margins.

Increasing revenue is going to be trickier. Chen’s predecessors found it much easier to cut costs than revive growth. Still, the Classic and Passport devices are designed to appeal to fans of BlackBerry’s iconic keyboard. And the BES12 platform has drawn partners like Samsung and Boeing, along with potential customers like Air Canada.

BlackBerry says it may take a few quarters for evidence of revenue growth to occur because of the way it accounts for device sales (it records revenue not when units are shipped to distributors but when users turn them on) and for software (which includes subscriptions and support spread over several quarters).

BlackBerry’s recent report did give bears plenty of fodder for gloomy predictions – revenue was down 34%, $125 million under the Street’s consensus forecast. But the company’s stock has shown an ability to recover quickly from such grim metrics. The bad news reflected BlackBerry’s past, but a better future still seems plausible. Gone are the days in which BlackBerry can beat Apple. But 2015 may be the year when BlackBerry shows reports of its demise were greatly exaggerated — and that alone would make for a remarkable achievement. 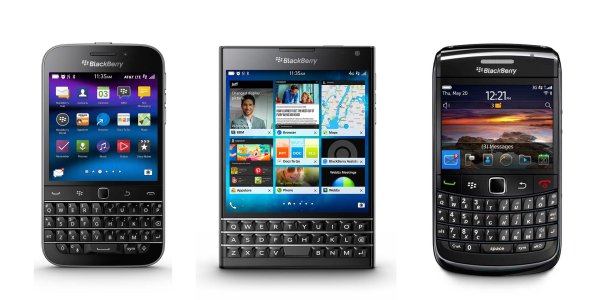