A Nation in Dire Need of Christmas

As the year winds down, even the biggest optimist can’t deny that 2014 has been a tough year for our nation and the world. The tragedy of the past year has played out on our television screens and in our newspapers. Everyday the headlines seem to get worse. Just this past weekend, our nation was dealt another blow after a disturbed individual executed two New York City police officers in broad daylight. The man was seeking revenge for the unprosecuted death of Eric Garner—an unarmed black man who was killed during a disagreement with New York City police officers over the illegal sale of cigarettes.

The roots of the violence that killed Officers Wenjian Liu and Rafael Ramos this past weekend and Eric Garner and Michael Brown earlier this summer are complicated and multi-faceted. Racism, policism, economic and structural injustices are only some of the contributing factors.

Though we can’t name everything that’s marked these men’s deaths, we can name the shame that we as a nation experience knowing that this is a country where the plague of violence continues to rage on with no end in sight.

Bobby Kennedy said it so well: “whenever any American’s life is taken by another American unnecessarily—whether it is done in the name of the law or in the defiance of law, by one man or a gang, in cold blood or in passion, in an attack of violence or in response to violence—whenever we tear at the fabric of life which another man has painfully and clumsily woven for himself and his children, the whole nation is degraded.”

Against this grim backdrop, our nation comes upon Christmas. The true spirit of this season is often trapped behind our society’s gilded age of consumerism and superficiality. But if we open our eyes and our hearts to rediscover the radical story of Christmas, the holiday can be a source of hope and liberation for our nation during this time of great trial.

Though we tend to romanticize the Christmas story, it’s important to remember that Mary and Joseph bore a lot of hardships leading up to Jesus’s birth. Time and again, they faced discomfort and rejection. As Luke puts it so vividly, there was no room in the inn.

Our nation is suffering its own winter of hardships, but in Jesus, God proves that love itself can be born amidst brokenness, abandonment, and obscurity.

And this is a love that can overcome violence. Christians believe that Jesus is the fulfillment of the dream the prophet Isaiah had of a world made new, a time and a place where “swords and spears are beaten into ploughshares and pruning hooks” and nations “will cease to learn the art of war.”

Jesus comes to bring that holy dream of Isaiah this Christmas, and in the words of Glenn Rudolph, he comes to create a place where ” peace will pervade more than forest and field, [and] God will transfigure the violence concealed deep in the heart and in systems of gain.”

The basic message of Christmas is simple: No matter who we are, no matter what we’ve done, or how badly we’ve failed, God never grows tired of loving us. In Jesus, God has visited his people. At Christmas, Jesus came all the way down into the grittiness of human dysfunction—its violence, its disloyalty and its sinfulness—to bring everyone up. No one is excluded, and no one is left behind.

In the United States, Christmas comes during the darkest time of the year, where sunlight only appears eight hours a day. But it is in this context that the holiday is best understoood. The child born on Christmas is the Star of Bethlehem, most visible on the darkest day of the year.

In his birth and in his story, we can begin to discern a new way forward: a way that leads out of darkness and into God’s wonderful light. 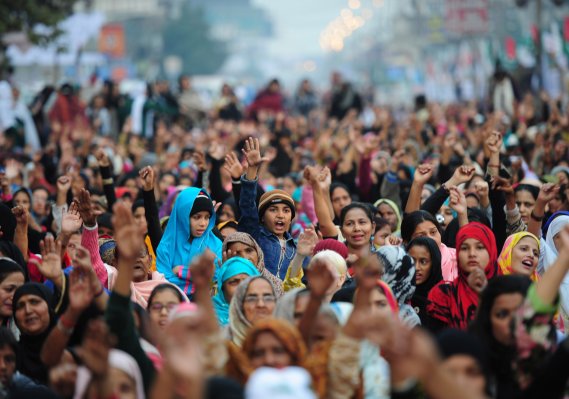 The Problem With Moderate Islam and Why We Need to Redefine Radical
Next Up: Editor's Pick