Ravens running back Ray Rice and his wife Janay made statements to the news media May 5, 2014, at the Under Armour Performance Center in Owings Mills, Md, regarding his assault charge for knocking her unconscious in a New Jersey casino. On Monday, Sept. 9, 2014, Rice was let go from the Baltimore Ravens after a video surfaced from TMZ showing the incident. (Kenneth K. Lam/Baltimore Sun/MCT -- Getty Images)
Baltimore Sun—MCT via Getty Images
By Charlotte Alter

Editors and news directors have voted the NFL domestic violence tumult the top sports story of the year in an annual poll conducted by the Associated Press.

After Ravens running back Ray Rice was caught on video knocking out his then-girlfriend-now-wife Janay Rice and Vikings running back Adrian Peterson was indicted on felony child abuse charges, the league has struggled to address how players are disciplined for violence off the field. Both Rice and Peterson initially received slaps on the wrist (Rice initially got a two-game suspension, Peterson was scheduled to play a week after his indictment) until public outrage led the league to suspend them both. Rice has now won his appeal to be reinstated, while Peterson is suing the NFL. Commissioner Roger Goodell is pursuing a new player conduct policy but the players’ union is fighting him every step of the way.

The 3rd most important story of the year was LeBron returning home, the 4th was the increased openness of gay athletes like Jason Collins, and the 5th was the Giants winning the World Series. 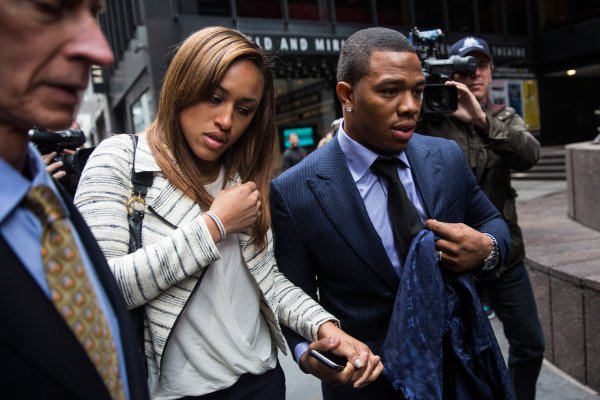