Review: Angelina Jolie's Unbroken Is Grand, But Not Quite Enthralling

All year long, this was the unseen movie with the biggest promise — the one sure to lock up critics’ awards and Oscar shortlist citations. As other films premiered at festivals in late summer and early fall, Unbroken held out the tantalizing inevitability of gravity and grandeur: the true tale of Louis Zamperini, Olympic runner and war survivor, directed by Angelina Jolie.

For many reviewers, the build-up led to a big breakdown when they finally saw it. Unbroken was just… a movie. So far it has snagged no top prizes from the critics’ groups, and was shut out of the Golden Globe nominations — though its star, Jack O’Connell, took Best Newcomer awards from the New York Film Critics Online and the National Board of Review. Many reviewers compared the movie unfavorably with the Laura Hillenbrand best-seller on which it was based. And some of the early notices were on the peckish side. “An interminable, redundant, unnecessary epic,” wrote The New Yorker’s David Denby, “devoted to suffering, suffering, suffering.” Real moviegoers get to choose their own epithets starting Christmas Day, when the movie opens.

So where does Unbroken fit on the spectrum of anticipation and disillusion? I’d say, closer to the top. It’s a big, confident film that tries to tell an impossibly broad, anecdotal story — for Zamperini, who died in July at 97, had already lived three lives before he was 30. This American son of Italian immigrants finished eighth in the 5,000-meter race at the 1936 Berlin Olympics (Hitler dropped by to congratulate him); survived the crash of his B-24 as a bombardier in the Pacific War and spent 47 days near starvation on a life raft; was captured by the Japanese, sent to a prison camp and for two years suffered the personal torture of the sadist in charge. He came home, fell into alcoholism, got born again with the encouragement of Billy Graham and spent the rest of his life proselytizing. If Peter Jackson had taken on the project, Unbroken would have spanned nine installments.

Jolie’s version, from an uncharacteristically straightforward script by Joel and Ethan Coen, takes Zamperini through the end of World War II,. We get the Olympics, the raft ordeal and the prison camp — in movie terms, Chariots of Fire plus Life of Pi plus The Bridge on the River Kwai. Also, there’s a little backstory of his youth in Torrance, Cal., where Louie deflected bullies’ taunting by focusing on his track skills. In these early scenes he is prodded toward respectability and greatness by his brother Pete (Alex Russell) with inspirational bromides like, “If you can take it, you can make it” and, “A moment of pain is worth a lifetime of glory” — clichés that will become life-saving mantras in Louie’s times of unbearable stress.

Jolie begins with a superbly choreographed B-24 raid over the Pacific — pellucid morning sky, heavenly choir, the ack-ack of enemy fire — with Louie as the bombardier. Having returned to base, landing on a flat tire, he and his men are given an old rat trap of a warplane. Says one of his pals: “This is like sittin’ in the living room tryin’ to fly my house.” On May 27, 1943, that plane got shot down, with only three survivors: Louie, Capt. “Phil” Phillips (Domhnall Gleeson) and tail gunner “Mac” McNamara (Finn Wittrock). On their raft they have few supplies and less hope, living off shark meat and Louie’s indomitable will.

The movie’s third and longest section is in the Omori POW camp outside Tokyo, where Louie attracts the depraved attention of Sgt. Watanabe (Takamasa Ishihara, the singer known as Miyavi, in his first movie role). A preening dandy, Watanabe has enough command of English to hurt Louie with words as well as his riding crop. He issues contradictory commands — “Look at me!” “Don’t look at me!” — each earning a whack on Louie’s legs or torso. Like many criminal sadists, he blames his victim for all malevolence: “Why do you let me hit you?” And whack again.

Out of one camp and, in early 1945, into another, Louie finds his old psycho nemesis awaiting him. Watanabe has dreamed up a new game: Louis must hold a heavy board on his shoulders for hours, with his guards told: “If he drops it, shoot him.” This scene — it’s in all the TV spots for Unbroken — is Louie’s public Calvary. And unlike Jesus, he survives it.

If the Unbroken needle stops at Impressive and doesn’t quite rise to Enthralling, it’s because Jolie stints on exploring the doubts that tortured Louis nearly as much as Watanabe’s punishments did, and whose details so enriched Hillenbrand’s biography. Even Jesus in his final hours felt stung by the betrayal of his friends and his Father. Jolie’s Louis is almost more Christlike than Christ. He remains a man of steel, reducing the stakes from “Will he crack?” to “How will he endure?” Since we know Louis outlived his internment, the movie relinquishes some of its dramatic tension.

So the movie Louis is a traditional movie hero, unwavering in his belief: “We win by surviving.” But he’s a hero who harbors not vengeance but forgiveness. The real Zamperini returned to Japan after the war to visit his captors and forgive them. Only Watanabe refused a meeting.

This decathlon of pain demands an actor who can portray not just the horror of Louis’s plight but his supernal will to overcome it. O’Connell, the 24-year-old Anglo-Irishman who made a splash as the teenager in prison with his even more violent dad in Starred Up, is up to the challenge of inhabiting Louis over a decade of his young manhood — 10 years that seemed like a lifetime and death-time. Jolie has made a grand, solid movie of the Zamperini story, but O’Connell is the part of Unbroken that was truly worth the wait. 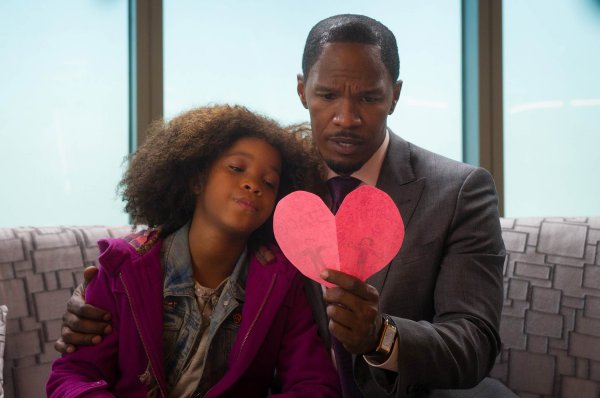 Review: 'Annie' Is Surprisingly Sit-Throughable
Next Up: Editor's Pick