But geo-strategically, the schoolhouse drama ratcheted up Monday, when the Russians confirmed that they have invited Kim Jong Un to Moscow next May—before the North Korean leader meets with the leadership of China, his country’s historic benefactor.

Russian presidential aide Yury Ushakov said that Kim has been invited to Russia’s 70th anniversary celebrating the end of World War II. “Invitations have been sent to many leaders of countries, including Kim Jong Un,” he told reporters. “Signals have been received that he means to come to Moscow and participate in the celebrations.”

All the international chest-thumping over the U.S. claim that North Korea hacked into Sony’s computers, destroying data and posting embarrassing revelations about the company’s internal workings for all the world to read, misses a bigger point: Beijing is not happy with Kim Jong Un, and Moscow’s move on the Outstanding Leader highlights just how far he has fallen in Beijing’s esteem.

Kim has counted on financial support from China to keep his impoverished nation alive. With the price of oil collapsing, there’s little chance that Russian President Vladimir Putin will be able to offer much financial aid to Pyongyang.

In a further example of warming ties, the official North Korean news agency on Sunday hailed the publication of Kim’s Let Us Brilliantly Accomplish the Revolutionary Cause of Juche, Holding Kim Jong Il in High Esteem as the Eternal General Secretary of Our Party in Russia. “Juche” is Korean for self-reliance, a mantra of Kim Jong Il, the father of the current North Korean leader.

Kim has never visited a foreign country since taking over North Korea following the death of his father, Kim Jong Il, in 2011. China would be the natural place for his debut on the world stage, given the alliance between the two nations that dates back more than a half-century to the Korean War.

But strains between the two longtime allies began to show following missile and nuclear-weapons tests, including a 2013 atomic blast after Kim assumed command. The Chinese government summoned Pyongyang’s ambassador to the foreign ministry in Beijing to decry that test, and reduced energy shipments to North Korea.

Things could get dicey in Moscow if Kim accepts Putin’s invite. In another flashback to high school, Moscow also has invited South Korean President Park Geun-hye to the anniversary celebration. If both attend, it could lead to the first meeting between the two Korean leaders. 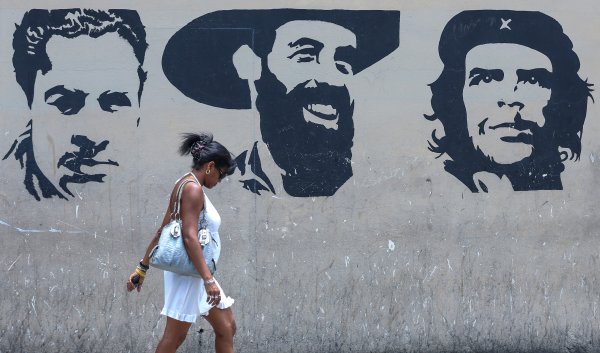 Lifting the Embargo Means Cuba Can No Longer Play Victim
Next Up: Editor's Pick