Apple's iPhone 6 is displayed at an Apple store in Beijing, China on Nov. 11, 2014.
Bloomberg—Bloomberg via Getty Images
By John Brandon / Inc.

Technology is always advancing, but it can be hard to know which advancements are really worth watching. Next year, these giant leaps forward could impact your business. An even thinner iPhone, a smarter car, and maybe even a Wi-Fi maker robot could debut next year.

Last week, Adobe announced they are working on a pilot project for Adobe Photoshop to run on the Web. This is a bigger milestone than you might expect. In a demo, I saw how the app looks the same as it does in Windows and the Mac. The app is housed on a cloud server, then streamed (almost like a video) to the browser. Each click and action is interpreted by JavaScript but the processing takes place in the cloud. When all desktops apps run on the Web, there won’t be a need for the desktop anymore. All you will need is a thin Web client. The project is a pre-alpha but I’m hoping it goes mainstream.

Apple will likely release their thinnest model yet next fall and finally use the iPhone Air nomenclature. What might not seem as obvious with this model, especially among consumers who think this is just a follow-up to the iPhone 6 Plus, is that Apple will likely debut some new battery technology based on tech from 2014 that revealed how phones will charge in a few minutes, not an hour. In fact, in a sense, it’s already here. I’m expecting the iPhone Air to last two days instead of one. My prediction: It will be even thinner, much lighter, and might even have a slight curve like the LG G Flex.

After the success of the Surface Pro 3 (according to Gartner, market share for this tablet that also runs desktop apps grew a full one percentage point in Q3 of 2014), Microsoft will likely make a smaller tablet version similar to the iPad Mini. There are already widespread rumors on this one. My prediction is that Microsoft will take the Surface name and use it for a new smartphone (replacing the Windows Phone), but the big surprise is that computer chip technology, battery tech, and a few other innovations will mean this phone will also run Windows desktop apps like Photoshop or that one legacy accounting program you still use. We really won’t need to take a laptop on business trips at that point.

The maker movement is partly the result of lower cost 3D printing hardware, innovative small factories taking advantage of services like Maker’s Row, and just a desire to get back to the basics of more localized manufacturing and production. Yet, it’s also built on low-cost hardware, sensors, batteries, and other DIY kits (this is what essentially birthed the company 3D Robotics). One new sensor, the Belkin WeMo Maker, just came out and costs only $80. I’m expecting gadgets like this and the FirstBuild sensor to create a bigger buzz next year than they are making now. Using these low-cost wireless sensors, makers will be able to get more gadgets connected to the Internet–even things like curling irons (did you leave it on?) and your pool (is it clean?). My hope? They will also start building more robots that are connected to your home and, I don’t know, mop up after you.

It might feel like an inside baseball project, but Google is pretty serious about revamping the look and feel of every app. It all started with Google Inbox and theNexus 6 smartphone. Material Design is a user interface concept that mimics how real paper looks and acts. Virtual “sheets” or notecards might have different lighting, thickness, or weight that mimic real cards. It’s cleaner, has more white space, and more colorful than the apps you use now, like Gmail. The big impact is that all of the Google products we use, from scheduling to location finding, will use this flat, clean look.

I always like to include at least one car in my tech predictions, because automotive technology always seems to create a trickle-down effect. What starts with a car–like sensors that detect pedestrians or cameras that monitor traffic–might end up in other products. Toyota will finally debut the first production hydrogen fuel cell car in mid 2015. The car will drive about 300 miles per fill. The best news? These cars do not create any emissions. They run just as clean as a battery-powered EV but can be “refueled” much faster–usually about ten minutes. 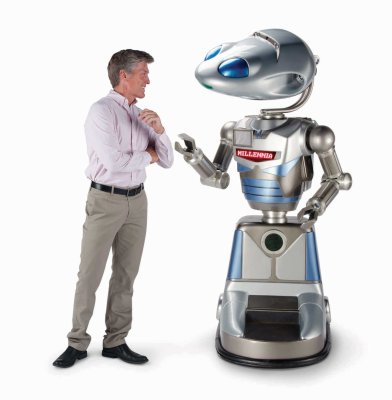 6 Crazy Tech Gifts You Can Only Buy If You're a Billionaire
Next Up: Editor's Pick