It would have been the perfect moment to let go. Abby Wambach had just led Team USA to the soccer gold medal in the 2012 London Olympics, scoring a goal in five of the Americans’ six games. The win gave Wambach her second Olympic gold since joining the national team in 2001. And she was 32, a decade older than her youngest teammate. By that age Mia Hamm, a mentor and the player to whom Wambach is most often compared, had already packed up her cleats.

“You have that ceremony, you bow, you listen to the national anthem, you’re so happy,” says Wambach, recalling the feeling from 2012 while stretched out on her couch on a chilly December day at home in Portland, Ore. “Then it’s over, you step off that podium and say, ‘I want to do that again.'”

And with that, Wambach turned her obsessive attention to the upcoming women’s World Cup. It’s the biggest prize in soccer–and the one major title she has never won. This summer’s tournament in Canada is likely Wambach’s last shot. “A World Cup win would give me a sense of completion,” says Wambach, “and purpose.”

You can trace a direct line from the current popularity of girls’ soccer in the U.S. back to July 10, 1999. That was the day an exultant Brandi Chastain stripped to her sports bra after scoring the winning goal in the first women’s World Cup played on U.S. soil. The tournament–and the now iconic image of Chastain celebrating on the Rose Bowl field–sent interest in the game soaring. Hamm, the team’s star, got her own video game. And young girls rushed to join in: the number of girls playing high school soccer jumped 45% after 1999, according to the National Federation of State High School Associations.

Even though the American team hasn’t won a World Cup since, the tournament remains its biggest stage. The electric 2011 final between the U.S. and Japan was then the most watched soccer game in ESPN history, drawing some 13.5 million viewers. That’s partly good timing: the knockout games are in late June and early July, after March Madness and the NBA playoffs, before the NFL opens training camp and as Major League Baseball enters the season’s dog days. And unlike at the Olympics, there are no swimmers or gymnasts to hog the spotlight. The World Cup is the closest women’s soccer ever comes to having the nation’s undivided attention. Between tournaments, interest plummets: two U.S. women’s pro leagues have folded in the past 12 years. The title drought has been especially cruel for Wambach, who has become one of the game’s greats. She eclipsed Hamm as the all-time international goal scorer, women’s or men’s–Wambach now has 177 to Hamm’s 158–and is a finalist for the 2014 FIFA Women’s World Player of the Year award. As of Dec. 18, the U.S. team was ranked No. 1 in the world.

Wambach has lately become a force off the field too. She is leading the fight to have the 2015 World Cup played on grass, as every men’s tournament has been, rather than on the scheduled artificial turf. And in 2013 she became perhaps the highest-profile gay American athlete to get married.

And so just when others might be finally moving on, Wambach can’t quit yet. “All the hardships, the sacrifices, the blood, the sweat, the broken bones, the broken relationships will make more sense if we can bring home the trophy,” Wambach says. And if the U.S. falls short again? “I’m sure I’ll be fine. But I’ll be pissed off the rest of my life.”

Wambach grew up in suburban rochester, N.Y., the youngest of seven children, born over 11 years. To deal with the chaos, her mother Judy would often send the kids outside and lock the doors until they tired. The athletic brood devised games to pass the time, and a favorite was dressing their youngest sibling in hockey gear and firing pucks at her. “We would just start whaling,” says Laura Wambach, a middle-school teacher and one of Abby’s sisters. “And I don’t ever remember her crying.” It was a preview of the toughness she’s now known for. In 2010, Wambach suffered a bloody gash late in a World Cup qualifier. In YouTube footage that’s been viewed hundreds of thousands of times, Wambach can be seen grimacing but otherwise standing still as a team doctor staple-guns her forehead back together.

After a stellar high school career– though she’s still rankled by losing the state title game her senior year–Wambach chose to attend Florida over the University of North Carolina, Hamm’s alma mater and a women’s-soccer powerhouse. Florida had begun its women’s team just four seasons earlier to comply with Title IX, and Wambach’s impact was immediate. In 1998, her freshman year, Florida made it to the national championship game, against UNC. Channeling the ferocity that her U.S. teammates refer to as “crazy eyes,” Wambach took command of a second-half huddle and told the team that they were simply not allowed to lose. They didn’t. “It required a certain level of intensity to be on the same field with Abby,” says Florida coach Becky Burleigh. “She’s bringing it–how can you not?”

Wambach was similarly vocal when she joined the national team in late 2001. Legends like Hamm made most rookies sheepish. Yet Wambach–who had a poster of the superstar on her bedroom wall growing up–talked so much that the team got her a T-shirt that read, Help! I’m talking and I can’t shut up!

Since she was a kid, Wambach’s height–she’s now 5 ft. 11 in. (180 cm)–and strength have overpowered opponents. She’s especially adept at positioning her frame to rocket over defenders and head the ball into the goal. “She’s the best player in the world, all-time, in the air,” says Pia Sundhage, the U.S. coach from 2007 to 2012. A spectacular header in the quarterfinals of the 2011 World Cup saved the U.S. from elimination–and helped turn Wambach into a celebrity. “The most surprising thing was the grown men, 30-year-old guys in the bar watching football, being like, ‘Holy sh-t, Abby Wambach, I want to take a picture of you,'” says Sarah Huffman, Wambach’s wife. After Wambach used her noggin to score the decisive goal in the 2004 Olympic gold-medal game, U.S. vet Julie Foudy kissed Wambach’s forehead and said, “Thank God for that dome!”

Her signature move, however, has come under increased scrutiny because of the growing awareness of brain trauma linked to sports. Girls’ soccer has the second highest concussion rate in high school athletics, after football. One prominent concussion expert says heading should be banned for all players under 14. Wambach disagrees and says heading safely is a matter of practice and technique: brace your neck muscles when the ball approaches and ram all the way through. “If you actually go to impact the ball, your body is ready for it,” she says.

That skill helped turn Wambach into a top scorer for the national team, and after Hamm retired in 2004, Wambach took her place as the franchise player. But her rise coincided with the exit of other ’99 stars like Chastain and Foudy and a decline in attention for the national team. Girls’ participation on the youth and high school levels was still growing, but women’s matches struggled to draw spectators. A pro league launched in 2009 disbanded after the 2011 season.

Wambach felt responsible for the falloff. She thinks that not having what she calls Hamm’s “all-American look” contributed. “I’m honest enough to know that does play a role, the sex-symbol part of women’s sports,” says Wambach. “I don’t think it’s right, but it is what it is.” And it’s clear that the presence of the young, highly marketable phenom Alex Morgan on the 2011 World Cup team helped restore some of the buzz. “It’s not because Alex is pretty,” Wambach says. “But it helps.”

Wambach, who says she first came out to her teammates and family at 22, never publicly discussed her sexuality before marrying Huffman, a former pro soccer player. (The couple has a civil union but plans to make the marriage official in Oregon, where it’s now legal). “I don’t stand on top of a mountain and go, ‘I’m gay, hear me roar,'” says Wambach. But she says she’s realized that she can be a role model for young people struggling with their sexuality. “Of course, there have been moments where I’m like, ‘Geez, should I have kept my hair long?'” Wambach says. “But I’m willing to take the risk of being myself and not appealing to the masses. And if there’s a kid out there who can look at me and go, ‘I’m like her, I’m comfortable,’ I’m proud of that. That’s a win.”

Wambach heads into this World Cup with the added burden of taking on FIFA over its decision to have the women play on artificial surfaces. A complaint filed with the Human Rights Tribunal of Ontario accuses FIFA and the Canadian Soccer Association of discrimination against female players. “That’s where they are so corrupt,” Wambach says of FIFA. “In that they’re like, ‘Well, it’s our way, and we won’t tell you why. We don’t have to.'”

In an email, FIFA secretary general Jérôme Valcke said Canadian sports officials proposed playing on turf because “most sporting infrastructure in Canada is on artificial turf.” Yet FIFA has made special arrangements for grass surfaces before. During the 1994 men’s World Cup in the U.S., temporary grass surfaces were installed in Giants Stadium in New Jersey and the Silverdome outside Detroit. “If you sit here and tell me that the men’s World Cup would ever be played on an artificial surface, I’ll tell you you’re a liar,” says Wambach. “And when you force women to play on turf and not the men, what does that say? That just lessens the value of what we do. It’s a clear violation of dignity, period.”

Most soccer players prefer grass fields. The ball takes trickier bounces on turf, and grass produces less strain on knee ligaments, according to a 2010 study in the Journal of Biomechanical Engineering. Turf also has the potential to curb the sorts of passionate scoring celebrations that help endear fans. Would players slide across the field if it means burning their knees? “They’re taking the joy away,” Wambach says. “I mean, what are we going to do? Go over to the corner flag and box it? It’s just stupid, and it’s totally preventable.”

Yet it’s a fight Wambach is unlikely to win. And whether the games are played on grass or moon rocks, a victory will give her career the same capstone, a loss the same permanent sting.

Winning won’t be easy. The U.S. has been placed in the “Group of Death” with two other top-10 teams: Sweden–now coached by Sundhage, who’s deeply familiar with the American personnel–and Australia. Nigeria also has impressive young talent. Other countries are investing more in the women’s game, and the rest of the world has made huge strides since ’99. “Before, it was O.K. to just lump it forward and see what we can do,” says Wambach. “We had a little more of a head start on other countries. Now they’re better, they’re faster, they’re stronger.”

But Wambach has a habit of peaking in the major moments. “She wants it more than any other player,” says Hamm. “It’s inspiring.” And Wambach craves this World Cup more than anything. “We have to push our limits,” she says. “That’s what makes it fun, what makes me come back for more. I honestly don’t know what my limits are. I’m here to find out.” 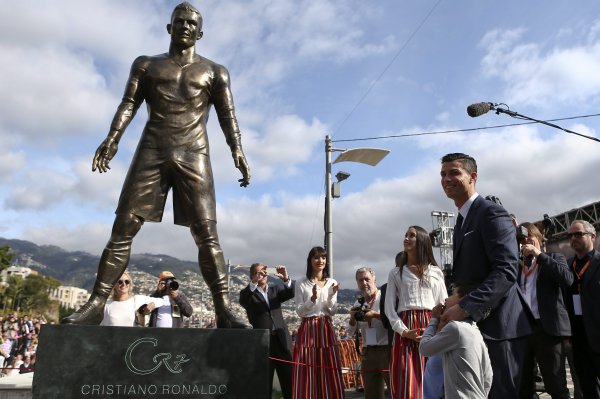 Cristiano Ronaldo Statue Stands at Attention in Portugal
Next Up: Editor's Pick