Your Tablet Will Be Your TV: 5 Bold Tech Predictions for 2015

Every winter for the last 26 years, I’ve taken a stab at predicting tech trends for the upcoming year. I’ve had a solid track record: Last year, I was half-right when I said Google would spin off Motorola — it was instead sold to Lenovo. I also predicted PC sales could actually grow in 2014, and that was basically true: In 2013, PC sales were down 10%, and this year they’ll only be off by about 2.5%. That resurgence came as people figured out their shiny new tablets couldn’t fully replace their PCs.

Oh, and back in 1998, I said Apple would be the largest consumer electronics company in the world within a decade. I remember that one mostly because the piece got so many comments calling me an idiot.

With that in mind, here are my top five predictions for tech in 2015:

1. Tablets will be positioned as personal TVs. The tablet market has become competitive enough to drive prices down to the point that about half of American adults own one. Tablets have become major hits worldwide, too, especially lost-cost models meant for consuming media.

But in 2015, we will see a major push to position tablets as personal televisions. Qualcomm’s new Broadcast LTE chip, which enables media to be broadcast directly to a smartphone or tablet, will help make this happen. One of China’s major TV broadcasters, for example, is creating a branded tablet marketed as a TV that can get all of the broadcasters’ content as part of a subscription service. The Chinese tablet will be $99 with a small monthly content fee.

I already turn all my tablets into televisions via Slingbox, but I need a secondary device to make it happen. Tablet owners can already get video content via apps like Netflix or over the web, but come next year, tablets will be marketed as televisions first and computing devices second.

2. Streaming media will be everywhere. HBO’s decision to offer streaming-only services in early 2015 is a big deal. This type of unbundling of traditional cable content is the tip of the iceberg when it comes to moving even more content into direct streaming models and services. Add to that the dedicated social media platforms being developed around streaming content and shared viewing from remote locations, and next year we could see streaming media expand its reach and have a big impact on traditional media distribution.

3. Apple will release a new ultra-thin, ultra-light MacBook Air. While Apple is rumored to be releasing a bigger iPad next year, I think Apple’s really big hit in 2015 — besides the Apple Watch — will be a newly designed MacBook Air. Apple’s MacBook Air pushed the laptop market to thin and light designs overall, but if Apple does something even thinner and lighter with a new MacBook Air (and maybe a retina display) it could make “ultra-thins” the next big thing in laptops.

4. Application-specific tablets will take the market by storm. Did you know it’s cheaper to buy a $99 tablet than a souped up clock radio for the bedside? And the tablet gives you not only a variety of clock faces and alarms, but the versatility to hear Internet radio, AM/FM radio, podcasts, police and fire radio bands and more. This is just one of the trends we’re seeing as people buy cheap tablets to hang under kitchen cabinets, place in bathrooms or put in their kids’ rooms for news, podcasts and television.

5. You will finally start using 3D scanners and printers. While 3D printers will gain more traction in 2015, what the market really needs are easier ways to design 3D products. I believe we will see the first laptops with built-in 3D cameras by end of the year. Along with a 3D printer, that would make it possible to take an object, put it in front of your laptop camera and push print. Don’t be surprised if Apple goes big on 3D cameras or ways to capture 3D images for use with 3D printers in 2015. 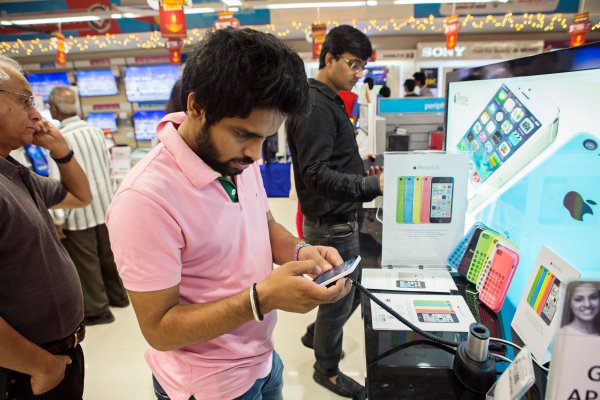 Why India Will Be the World's Second Biggest Smartphone Market
Next Up: Editor's Pick