“I think what Keane has done is just terrific,” Andy Warhol told Life magazine in 1965. “It has to be good. If it were bad, so many people wouldn’t like it.” “Keane” was the name on the phenomenally popular paintings of waifs with space-alien orbs that earned the ripe contempt of the critical establishment (back when there was one) and sold by the millions in originals, reproductions and knockoffs that flourished in every sidewalk art show from Malibu to Montmartre.

What Warhol and no one else knew in the ’60s was that Walter Keane, who built the business and took all the credit, wasn’t the artist; his wife Margaret was. Those big eyes were his big lies — a scandal that remained a secret until Margaret Keane divorced Walter, went public in a 1970 radio interview and later won a lawsuit she brought against her delusional ex-husband. (She’s still active at 87.) Now this tale gets a superficial, DayGlo-bright paint-over in Tim Burton’s Big Eyes, with Amy Adams and Christoph Waltz as the battling spouses in the Keane family circus.

Fifty years after the onset of Keane-mania, high-art arbiters have lost their power. Wealthy people of the American mid-century would ornament their penthouses with Jackson Pollock’s splash panels, as emblems of the most refined taste money could buy. Instead, today’s plutocrats invest in what was the low art of their childhoods — vintage comic books, Norman Rockwell illustrations and rock-star guitars — or in no art, like the Keanes. Burton, famed for bringing an extravagant vision and precision of design detail to movie remakes of The Pee-wee Herman Show, Batman and Planet of the Apes, has collected Keane since the 1990s and commissioned Margaret’s portraits of his serial leading ladies Lisa Marie and Helena Bonham Carter. Is Keane’s work art or kitsch? In the post-Good Taste era, that question no longer applies.

Even if Margaret Keane’s work were valued no more highly than C.M. Coolidge’s century-old paintings of dogs playing poker (two of which sold in 2005 for nearly $600,000), Big Eyes should resonate as an intimate alternative history of the women’s-liberation movement. Here is a subjugated female emerging from cultural bondage to toot the horn her husband had been playing, and saying was his. The Keane story is a rich parable that deserves either a wilder or a more acute telling than Burton provides here.

In the late ’50s, when Big Eyes begins, Margaret Ulbrich (Amy Adams) is a pretty divorcee with a Marilyn Monroe hairdo but no visible personality; she’s platinum bland. Arriving in San Francisco with her daughter Jane (played first by Delaney Raye, then by Madeleine Arthur), she gets a job daubing angelic figures on children’s cribs. On weekends, she displays her early big-eye acrylics at outdoor exhibitions — she’ll idealize your child on canvas for 50 cents, or whatever change you can spare. Her sense of self-esteem is so battered and basement-level, she daren’t ask for more.

Sometimes a masochist meets the perfect sadist. Margaret’s manipulator was Walter, a natural con man who quickly senses both the potential appeal of her work and the fragility of her temperament, ripe for exploitation by his predatory charm. “I’m just a Sunday painter,” he confesses to Margaret, and even that is a lie: he lacks even the most rudimentary skills as a visual artist. But as a huckster, he’s a genius. Convincing Enrico Banducci (the wonderful Jon Polito), owner of the hungry i nightclub, to let him put his and Margaret’s paintings on the walls of the corridor leading to the toilets, Walter finds that the customers love Margaret’s portraits, not his landscapes, and — the sly weasel! — takes credit for her work. Oh, why not? They’re all signed “Keane”; it’s the family business. Besides, as Walter tells Margaret, “people don’t buy lady art.”

He wasn’t kidding. The act or art of painting, from the Lascaux caves until recent decades, was deemed a guy thing — at least by those (male) connoisseurs who set the agenda. H.W. Janson’s 1962 History of Art, a standard reference that has sold 2 million copies (and which, it is said, was largely written by Janson’s wife Jane), mentioned not a single female artist in its 572 pages. The superb painter and collagist Lee Krasner, who as a student had been told by her teacher, the German expressionist Hans Hoffman, that her work was “so good you would not know it was painted by a woman,” shivered in the shadow of her famous husband, Jackson Pollock, and did not receive a Museum of Modern Art retrospective until just after her 1984 death, She was the only the second woman artist (after Louise Bourgeois) to whom MoMA had devoted a major solo show.

The Krasner-Pollock artistic relationship was symbiotic: two distinct, mutually enriching visions. Walter Keane was a fraud, but not simply a parasitic one. You could argue that his entrepreneurial flair — he turned Margaret’s big eyes into a flourishing operation that peddled not just paintings but posters and postcards — was at least the equal of her artistic talent, however that may be defined. Years before Warhol established his Factory, where others executed (and sometimes created) the Pop Art paintings and avant-garde movies for which he served more as producer than artist, Walter was masterminding the Keane mini-industry. Of course he had only one employee: Margaret, the paintings’ sole creator. And he kept her working away, anonymously and virtually imprisoned, in her locked atelier.

Yet the script by Scott Alexander and Larry Karaszewski, who also wrote bio-pics of Andy Kaufman (Man on the Moon), Hustler publisher Larry Flynt (The People vs. Larry Flynt) and Burton’s Ed Wood, allows for fewer nuances than you’ll find in the Keane oeuvre. Waltz plays Walter as a psycho Svengali, preening or ranting, with an oily façade anyone could see through except for Adams’ tremulously insecure Margaret. For most of the movie she seems near tears, like the pitiable gamines she paints, and ready to surrender to a case of the vapors. Only when she divorces Walter, moves to Hawaii and joins the Jehovah’s Witnesses does she summon the gumption to reveal the sad truth behind the big eyes.

In The Fighter, The Master and American Hustle, Adams proved her expertise at evoking the ordinary demeanor that conceals an extraordinary will. Here her challenge is almost insurmountable: grounding Margaret’s character in some kind of emotional realism while her acting partner is bouncing off the walls of a different, crazier movie. Yet she comes close to finding a coherent arc in the three stages of Margaret, from weepy ingenue to angry captive to the I-am-woman-hear-me-roar feminist who takes belated charge of her life and her legacy. In Burton’s oddly paint-by-numbers movie, Adams is the only one who manages to create a portrait more valid and valuable than the proto-Camp classics of Margaret Keane. 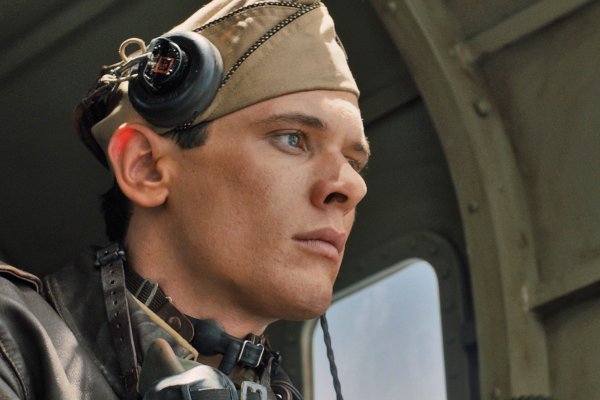 Angelina Jolie's Unbroken Is Grand, But Not Quite Enthralling
Next Up: Editor's Pick