Obama Looks to the '4th Quarter' of His Presidency

At the end of a grim year that saw his approval ratings sink, his party pummeled in elections and his legislative agenda stymied by opponents, President Barack Obama made an impassioned argument Friday that the nation has emerged stronger than ever from economic upheaval and an unending sequence of foreign crises.

It was a rare glimpse of vintage Obama, the upbeat change-agent from his campaign days, who has all but vanished after six tough years of turmoil. In his ceremonial year-end news conference, Obama was buoyant, bantering with the press corps, mocking North Korean leader Kim Jong Un for the rogue nation’s response to a Seth Rogen movie, and rattling off statistics about the positive steps his administration has taken. And he served notice that as he approaches the final lap of his presidency, he isn’t finished putting his stamp on the nation.

“Interesting things happen in the fourth quarter,” the sports-loving president said with a grin.

Read more: Obama says Sony ‘made a mistake’ in pulling The Interview

Obama’s remarks came after a six-week stretch in which he sidestepped Congress to issue a series of major executive actions and foreign policy pronouncements, including a unilateral overhaul of U.S. immigration law in November and this week’s announcement that the U.S. will begin to normalize relations with Cuba after a half-century of conflict.

“This is still a repressive regime,” Obama said of the Cuban leaders, “but I know deep in my bones that if you’ve done the same thing for 50 years and nothing has changed, you should try something different.” Recounting his historic phone conversation this week with Cuban President Raul Castro, Obama joked that he apologized to Castro for his windy preamble, only to have his Cuban counterpart go on for twice as long.

Obama acknowledged that dismantling the Cuba trade embargo would require the cooperation of Congress, both chambers of which will be controlled by Republicans come January. “I think there are real opportunities to get things done in Congress,” he said. “The question is going to be are we able to separate out those areas where we disagree and those areas where we agree.”

One key area of disagreement is the Keystone XL pipeline, which Republicans are set to move forward with early next year. Asked Friday whether he would approve the project, which has been touted by Republicans as a job-creator and strongly opposed by environmental groups, Obama sounded less inclined than ever. “It’s not even going to be a nominal benefit to U.S. consumers,” the President said.

But Obama made a case that in a year dotted with setbacks and marked by ongoing Congressional dysfunction, the U.S. government had largely succeeded in rising to the challenge. Ebola has been wiped from U.S. shores and is receding in much of West Africa. The tide of unaccompanied minors arriving on the southern border has swept back out. The U.S. campaign against the Islamic State of Iraq and Greater Syria (ISIS) saw the first signs of success. The economy is steadily improving, even if many have yet to feel the benefits of a brightening job market.

“I guess that’s my general theme for the end of the year. We’ve gone through difficult times,” Obama said. “But through persistent effort and faith in the American people, things get better.”

“Part of what I hope, as we reflect on the new year, this should generate is some confidence,” Obama said. “America knows how to solve problems. And when we work together, we can’t be stopped.

“And now I’m going to go on vacation,” the President added, eyeing an exit for his annual trip to Hawaii. “Mele Kalikimaka, everybody. Mahalo.” 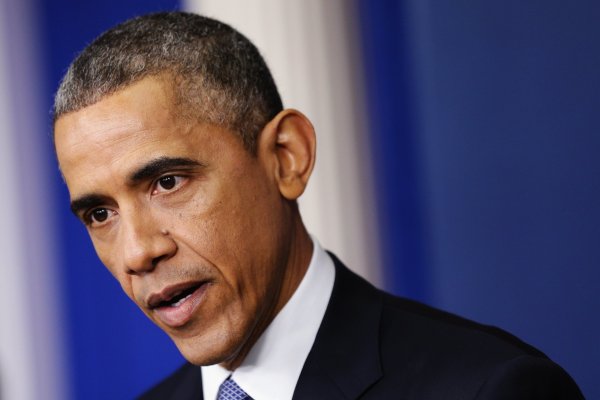 Obama: Sony 'Made a Mistake'
Next Up: Editor's Pick