If you’ve ever considered it odd that U.S. Christmas traditions revolve around indoor trees (real and plastic) and a plump, bearded man sliding down chimneys… you’re not wrong.

In fact, our conception of Santa Claus can largely be attributed to a single 1828 poem, Clement Clarke Moore’s “A Visit from St. Nicholas,” which enshrined the nation’s image of Santa–with his “little round belly” and a beard “as white as the snow–and propagated the idea of him coming through chimneys to deliver gifts in stockings, now common knowledge to children across the country. It’s just one of the ways our Christmas traditions can be traced to quirks of history.

Here’s a look at some of the notable and sometimes bizarre Christmas time traditions around the world.

The vast majority of Japan is not Christian, but one Christmas tradition persists: a trip to KFC. Since a “Kurisumasu ni wa kentakkii!” (Kentucky for Christmas!) marketing campaign was launched in Japan in 1974, the American chain has become a popular Christmas Eve hotspot. The campaign worked so well that sales that night typically outpace those of the rest of the year. Some people even order their bucket of fried chicken ahead, to beat the Christmas crowds.

In the Swedish town of Gävle, it is traditional to construct a 30-foot tall giant straw “Yule Goat” — a Christmas symbol in Sweden for centuries. And it’s tradition for some meddling kids (actually, unidentified criminal arsonists) to try to burn it down. According to the Gävle tourist board, the goat has been burned down 25 times since its construction became an annual tradition in 1966. So far this year, the Gävle goat is safely standing, as you can see on this webcam. You can also follow him on Twitter.

Christians comprise roughly 2 percent of the Indian population, or 24 million people. But Christmas trees in the warm climate are in short supply, so in lieu of the evergreen conifer many Indian families will adorn banana or mango trees with ornaments. In Christian communities, which are mostly in southern India, people put oil-lamps of clay on their flat roof-tops to celebrate the season.

Americans would recognize the Christmas trees decorated in Ukraine, as they’re similar to the traditional, Western fir tree, but Ukrainians will sometimes decorate them with an unlikely ornament: spider webs. The tradition stems from a Ukrainian folk tale, about a widow whose family was so poor they had no money to decorate their tree. Instead, a spider span a web around it on Christmas Eve — and when the first light of day hit it on Christmas morning, it turned into a beautiful web of gold and silver.

Beware the Yule Cat! This traditional Christmas fiend is said to terrorize the Icelandic countryside, particularly targeting those who don’t receive new clothes for Christmas. But the frightening festive feline is just one of Iceland’s “Christmas fiends”, who include Grýla, a three-headed ogress with goat-horns. The creature’s sons, the “Yule Lads”, hand out Christmas gifts to children who have been good (and rotten vegetables to those who have been bad).

Only in Italy do the witches bring gifts to children. That’s La Befana, a broom-flying, kindly witch who effectively takes over from Santa–in Italy, “Babbo Natale”—about two weeks after Christmas on Epiphany to deliver gifts to the good, and ash to the bad. Though the witch has her roots in the pre-Christian pagan tradition, she features in some tellings of the Christmas story in Italy — as an old woman who refuses to give the Wise Men directions to Bethlehem because she is too busy cleaning, and is forced to ride a broomstick for eternity as a result. The town of Le Marche, in northwestern Italy, celebrates her coming every January.

Save the ham. In the Czech Republic, carp is the mainstay of a Christmas dinner. The tradition of eating carp on Christian holidays dates back as far as the 11th century, when Bohemian monasteries would construct fishponds for the express use of farming the fish. Until recently, Czech families would buy a live carp in the weeks before Christmas and keep it in a bathtub, before slaughtering it on Christmas Eve ready for the following day’s meal. Many Czechs still take part in the festive superstition of saving a dried (and cleaned) scale from the Christmas fish in their wallets for luck over the coming year.

READ NEXT Here’s Where to Watch Your Favorite Christmas Movies 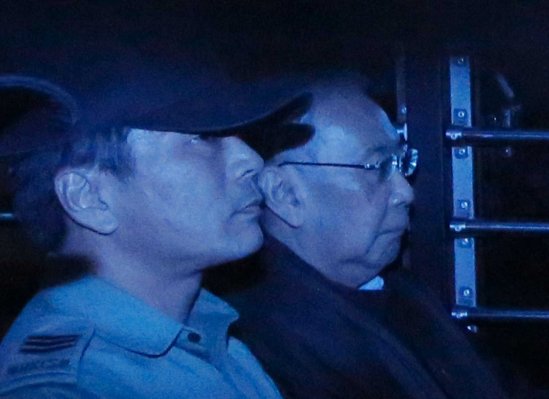 Hong Kong Tycoon Jailed for Graft
Next Up: Editor's Pick