Lifting the Embargo Means Cuba Can No Longer Play Victim

The number of U.S. citizens increase despite embargo laid on since 1960 in Havana, Cuba on 2 May, 2014.
Anadolu Agency—Getty Images
Ideas
By Jose Miguel Vivanco
Jose Miguel Vivanco is the Americas director at Human Rights Watch.

President Obama’s new approach to Cuba diplomacy is a breath of fresh air and a chance to make some real progress on human rights if the U.S. government uses the policy wisely.

Some critics contend that President Obama’s decision to re-establish full diplomatic relations with Cuba means that the United States has abandoned its commitment to protect human rights in the island. Some even argue that Obama’s new approach actually rewards Cuba, giving up leverage the United States allegedly had against the Cuban authoritarian government. This view is profoundly mistaken.

The confusion arises from the U.S. government’s own misguided rhetoric to maintain a costly embargo. For decades, U.S. authorities stubbornly held that the embargo was necessary to promote human rights and democratic change in the island. In fact, though, the embargo did nothing to improve human rights in Cuba. Instead, it imposed indiscriminate hardship on the Cuban population as a whole, and provided the Cuban government with an excuse for its problems and a pretext for its abuses.

Rather than isolating Cuba, the policy has isolated the United States, enabling the Castro government to garner sympathy abroad while simultaneously alienating Washington’s potential allies.

Not surprisingly, advocates in Cuba and abroad, as well as a majority of countries in the UN General Assembly —188 out of 192 in an October resolution — have repeatedly called for an end to the U.S. embargo.

Meanwhile, despite some positive reforms in recent years, the Cuban government continues to engage in systematic abuses aimed at punishing critics and discouraging dissent.

In 2010 and 2011, Cuba’s government released dozens of political prisoners on condition that they accept exile in exchange for freedom. Since then, the Cuban government has relied less on long prison sentences to punish dissent and has relaxed draconian travel restrictions that divided families and prevented its critics from leaving and returning to the island.

But the Cuban government uses other tactics to repress individuals and groups who criticize the government or call for basic human rights. Arbitrary arrests and short-term detention have increased dramatically in recent years and routinely prevent human rights defenders, independent journalists, and others from gathering or moving about freely. Detention is often used pre-emptively to prevent people from participating in peaceful marches or meetings to discuss politics. Detainees are often beaten, threatened, and held incommunicado for hours or days.

The government controls all media outlets in Cuba and tightly restricts access to outside information, severely limiting the right to freedom of expression. Only a very small fraction of Cubans are able to read independent websites and blogs because of limited access to – and the high cost of – the Internet.

Empirical evidence shows that it was irrational to continue insisting on a policy that never achieved its proposed objectives. The unilateral approach, a relic of the Cold War, has been ineffective for decades, and that’s precisely why this new policy by the White House provides a golden opportunity.

To promote human rights, judicial independence, free elections, independent unions, and free expression in Cuba, the U.S. government must understand that a multilateral approach is necessary. Involving key democracies in the region in reaching out to Cuba is much more likely to move the Cuban government toward respecting fundamental rights. It seems that Obama gets it.

No one should be under the illusion that the human rights situation in Cuba will improve overnight. On the contrary, it will be a long and frustrating process. But there is no doubt that with Obama’s new approach toward Cuba we are in much better shape to go in the right direction. 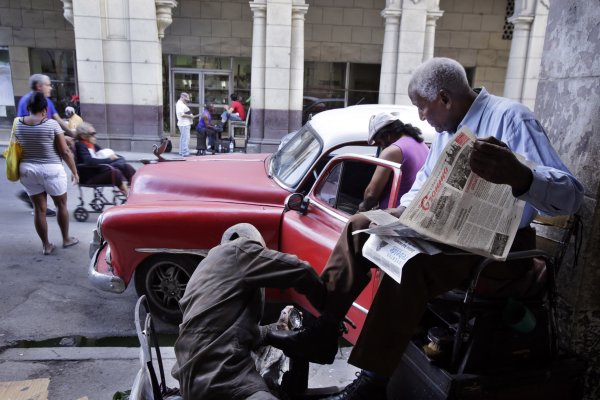 The Wall Between the U.S. and Cuba Has Yet to Fall
Next Up: Editor's Pick