Dancing With the Stars Recap: Two Stars Salsa Into The Sunset

Welcome back to season 18 of Dancing With the Stars. It’s still early in the season, so the names of the putative stars still blend together like a Frappuccino of fabulousness with an extra shot of glitter.

Last week the show ended with Olympic ice dancer Charlie White atop the leaderboard with Star Wars legend and Colt 45 enthusiast Billy Dee Williams holding down the bottom despite bringing Ewoks to the dance floor with him. This week the so-called stars are dancing in a style of their own choosing, so they only have themselves to blame.

Best/Worst Surprise: At the end of last week’s episode, the producers alluded to a surprise. To kick off tonight’s show they revealed that the surprise is that it’s a double elimination! While hate-watchers of the show were undoubtedly thrilled by the news, Billy Dee Williams looked like he lost the will to live right then and there. He has double hip replacements and arthritis! In the immortal words of Danny Glover: He’s too old for this s–t.

First Safe Couple of the Season: Out of the blue, Tom Bergeron announces that Drew Carey and Cheryl Burke are safe, but to punish them for that, they have to perform their jive that very second. Drew is a surprisingly nimble dancer (his skills were clearly honed by watching exuberant contestants on The Price is Right) as Cheryl puts him through his paces. Judge Bruno Tonioli appreciated that Drew tried to cover his mistakes, which is not a very good compliment if you think about it. 21/30.

Danica and Val: For some reason, Val decided to challenge Danica and choreographed a samba tough enough for a pro. When their routine ended, the camera zoomed in on Candace Cameron Bure‘s face because there is not enough drama on the dance floor, so they are trying to make us care about their fake rivalry. Despite Candace’s face, the judges liked the routine. 24/30

Billy Dee and Emma: Billy Dee is suffering from low self esteem, but Emma Yodas (sorry, not sorry) him out of it by surrounding him with scantily clad women who show him that dancing is fun. When they hit the ballroom floor for their tango they bring some extra women with them for a Peter Gunn for the ages. The judges give him the verbal equivalent of a pat on the head and send Billy Dee Williams to the sidelines to see if America can be bothered to keep him around. 15/30.

Meryl and Maks: Maks is seemingly thrilled to have a partner he can throw around, so he choreographed a lift-heavy routine that involved dancing downstairs to the ballroom floor for a ’50s inspired swing. Len Goodman declared, “Swing on, girl, you’re going to be here for awhile!” Bruno thinks Maks made the routine a bit too hard, which made Meryl lose time, but it was a stellar routine that would normally not be seen until way later in the season. Poor Billy Dee, this season he is outclassed on everything but class. 25/30, with Len (a.k.a. “the important one,” according to Maks) doling out the 9.

First Elimination: Diana Nyad, world renowned swimmer, is the first to be sent home. She was a consummate good sport and instead of crying or whining simply asked that she and recently-promoted pro Henry Byalikov get a chance to give their cha-cha a whirl on the dance floor. Obviously, the producers allowed it before forcing them to walk the plank.

Stupidest Moment: The producers invited Jeremy Miller, a.k.a. the kid who played Ben Seaver on Growing Pains and who dated both Danica and Candace, to watch the show. As Candace waved awkwardly from the dance floor, host Erin Andrews pressed him to choose either Team Danica or Team Candace, but he wouldn’t go for it. Stop trying to make their feud happen, show!

Candace and Mark: Candace is competitive (“I got one more point than Danica”) and also Christian (“I’m a Christian”) so when it comes time to dance a rumba, she wants it to be sensual, but not sexy. To achieve that balance, she insists that Mark wear a shirt. The dance was beautiful, but too contemporary for Carrie Ann Inaba‘s taste while Candace’s arms were not expressive enough for Len. 21/30.

Amy and Derek: Paralympian Amy faces incredible challenges when she dances, but perhaps none more daunting than the prospect of her legs flying off while she Charlestons. Despite the possibility, she and Derek perform a fast-paced swing routine that had her arms and legs flying akimbo while her prosthetic legs stayed in place. The judges had no words, because how do you judge a dancer when she has no legs and is still an incredible dancer? They did note that she missed an arm pass, which Derek chivalrously blamed on his jacket. 24/30.

James and Peta: Last week, Len said that James, the Big Time Rush boy bander, was just eye candy. In response, Carrie Ann smacked him for slander and Peta sprung into action. She wants to train James to be the best dancer possible, but James suggests they play it up by dancing entirely nude. They settle on a saucy samba with a bare-chested James and nearly nude Peta. Carrie Ann inducts him into the Sexiest Dancer Hall of Fame on the spot before handing him a 9. 25/30

Charlie and Sharna: To help Olympic ice dancer Charlie get in character for his tango, Sharna sends him to talk to Maks for pointers on being a bad boy. No clue on whether it worked, but Carrie Ann said he looked like a “wild-haired Baryshnikov” on the dance floor. However, when Len pointed out that he broke hold, Carrie Ann agreed. Luckily, Bruno Tonioli loves him when he’s bad and he earned 25/30, with Len giving a low ball 7 balanced out by Bruno and Carrie Ann handing out 9s.

Best Out Of Context Quote: “The judges go down on you,” declared Len to Charlie. Um, Len?

Nene and Tony: Real Housewife Nene Leakes and Tony Dovolani are dancing the jive, a dance chosen by Nene’s husband, a fact she recounts several times while cursing during rehearsal. The routine was fine, but clearly not memorable as I can’t remember it two minutes after it happened. Carrie Ann and Tony got in a nitpicky argument about arm placement in a jive, which was more memorable. 21/30

Sean and Karina: Len told hockey star Sean Avery the secret to winning Dancing with the Stars: Each week get higher marks. That’s what he got from Len this week after his surprisingly high-energy salsa with Karina Smirnoff earned him a 21/30.

Cody and Witney: Aussie teen sensation Cody Simpson served up a serious tango that will either rouse his millions of Twitter followers to action or will tick them off for being too racy with another woman. Cody insisted on updating the dance and the judges were more open to incorporating a moonwalk into a tango than you might expect. 22/30.

The Final Countdown: Nene is safe and Cody has five million Twitter followers so it’s Sean Avery who’s heading back to the ice rink. While Sean was certainly not as skilled as Charlie White or as personable as Danica McKellar or even the block of wood I have propping up my window, it’s sad to see Karina sent home so early in the season.

Best Reason To Come Back: The Switch Up. In two weeks, the stars will be forced to switch their pro partners. New pairs will be decided based on fan tweets, so if you want to see, say, Maks and Nene, tweet #DWTS Maks Nene and then sit back and watch the magic happen.

MORE: 5 Reasons a TV Show About an American Girl in Saudi Arabia Pissed People Off 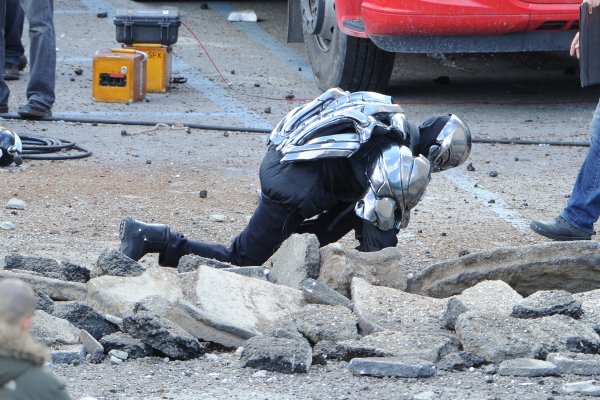 Avengers: Age of Ultron Photos Revealed
Next Up: Editor's Pick