You Now Can't Use Umbrellas Around China's Leader, Even if It Rains

In this photo provided by China's Xinhua News Agency, Chinese President Xi Jinping, center, and his wife Peng Liyuan, center right, wave as they arrive at the international airport in Macau on Dec. 19, 2014
Cheong Kam Ka—AP
By Elizabeth Barber

Hong Kong’s Umbrella Revolution has turned the humble brolly into such a potent symbol of democracy that it appears China’s President Xi Jinping does not want them in his presence.

When Xi landed in the gaming enclave of Macau on Friday, journalists waiting to cover his arrival were told not to use umbrellas — even though it was raining. Media were given raincoats instead, Radio Television Hong Kong (RTHK) reported.

No one in the official greeting party for the Chinese leader used umbrellas, either, Agence France-Presse remarked.

It was unclear who had made the Orwellian decision to banish umbrellas. Airport authorities in Macau claimed that it was too windy to hold umbrellas, lest they supposedly flew out of hands and endangered aircraft.

According to the Hong Kong Observatory’s website, Macau experienced northerly winds of no more than 19 km/h on Friday.

Umbrellas became a political icon after Hong Kong demonstrators used them to protect themselves against police pepper spray and batons during their 79-day fight for free elections. The street occupations ended on Dec. 15, but umbrellas have remained a poignant symbol of resistance against considerable odds.

That may put China’s political leaders, in their expensive gray suits, in a farcical bind over how to stay dry at public functions when the weather is against them.

In late October, a photo of Xi holding an umbrella — taken a year earlier, when umbrellas had no political connotations — won China’s top journalism prize. However, it was quickly turned into a meme by democracy protesters, and into life-size cardboard cutouts that were erected in the protest areas, where posing for a photo with the President, umbrella unfurled, became a must for visitors.

Xi is in Macau for two days to commemorate the gambling hub’s 15th year back in China’s hands, after centuries of colonial rule under the Portuguese. He is expected to use his presence there to gently dissuade the Chinese enclave — which, like Hong Kong, is governed under a “one country, two systems” formula — from going the way of unruly Hong Kong, where dissidents are agitating for the right to freely elect the head of the city’s government. 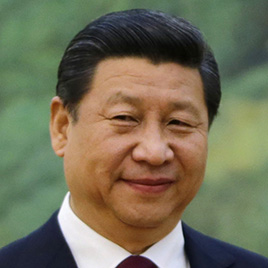