Chris Martin Jokes That Angelina Jolie Told Him to 'Write Me a Song, or Else'

Chris Martin performs with U2 during a surprise concert in support of World AIDS Day in Times Square in New York City on Dec. 1, 2014
Carlo Allegri—Reuters
By Per Liljas

Chris Martin was forced into composing the song “Miracles” for Angelina Jolie’s movie Unbroken. At least if we believe the Coldplay singer’s own jocular account.

“I got a message that said: ‘Meet in this undisclosed location,’” Martin explained when Vulture asked him about the song’s backstory at a recent Hollywood luncheon. The message apparently continued: “You’ll be blindfolded and picked up by seven ex-Navy SEALs.”

Martin adds: “So they kidnapped me, hit me over the head, and sprayed me with mace. When I woke up, I was in an office, and Brad Pitt was doing push-ups as Angelina Jolie was just sitting there with her crown on. There was also a guy holding a knife to my throat, and she said, ‘Write me a song, or else.’ And Brad Pitt said, ‘Yeah. What she said.'”

Then followed, according to Martin, an American Idol–esque tryout.

“We wrote a song and then she said, ‘It’s through to the final eight,’ and then we had live eliminations at her house,” Martin continued. “We came in second, but the main guy chickened out.”

Unbroken will be in theaters on Christmas Day. 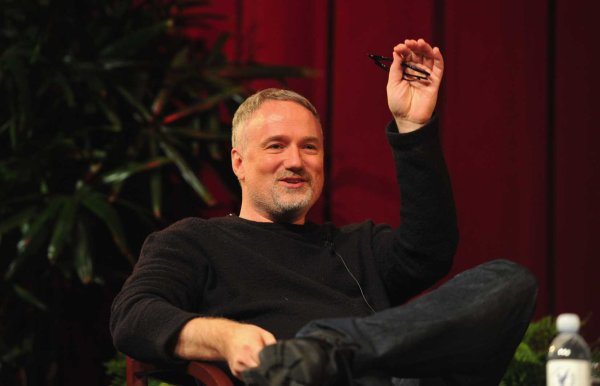 Fincher and Ellroy to Make HBO Series
Next Up: Editor's Pick