I Started Serial, But It Didn't End the Way I Had Hoped

Adnan Syed
Yusuf Syed—AP
Ideas
By Rabia Chaudry
Rabia Chaudry is a National Security Fellow at the New America Foundation, the President of the Safe Nation Collaborative, and a CVE expert and consultant who focuses on community resilience and law enforcement engagement. She is an attorney with a background in immigration and civil rights law and has been a community and interfaith advocate for many years. She writes and speaks frequently on Islam, Muslims, gender inequities, violent extremism, community advancement, and faith and gender oriented approaches to social justice and conflict.

Fifteen years after Adnan Syed was arrested, when I decided it was time to get a journalist to look at what I have always held as a wrongful conviction, I did it thinking that reporters can go places most of us can’t. They have ways of tracking down information, getting people to talk, and resources the average person doesn’t. A year ago I was not hoping Sarah Koenig would create a show based on the case that would become a worldwide sensation; I was hoping she would uncover the truth about who killed Hae Min Lee—a truth that would exonerate Adnan.

In her search for the truth, Koenig has taken us all along for the ride with her. Like the rest of the fans, I listened each Thursday with anticipation; unlike most others, I also listened with anxiety and trepidation. Koenig did dozens of interviews that I wasn’t privy to, and found many documents I had never seen before. And each week, while I was aware of the major plot points and flaws in the case, she revealed morsels of information I had never heard or considered. Would it make Adnan look good? Would it make him look bad? What would people, people who don’t know him one bit, think about him this week?

I can’t lie. I haven’t always been happy with Koenig’s reporting, with her not drawing hard and fast conclusions about issues and people. I wanted Koenig’s judgement, but in most cases she refused, or wasn’t able, to give it. I wanted her to be an advocate for Adnan, but she couldn’t be. I understood why, but I hoped otherwise.

Read more Everything We Know as Serial’s Season 1 Ends

What she did do successfully was blow wide open the idea of a fair criminal justice process. She brought to light questions of religious and ethnic bias, prosecutorial misconduct, police manipulation of witnesses, reasonable doubt, evidential reliability, ineffective assistance of counsel, maximum sentences, juvenile detention, and appellate logjams. It sounds like a crazy litany of “everything-that-could-go-wrong” in a trial, except that all of these things did go wrong in Adnan’s case. And Adnan’s case is no outlier – for any and every wrongfully convicted person, you can assume almost everything went wrong.

A few weeks ago Koenig visited me do a follow-up interview. None of that interview made it into the remaining episodes, but at that time, and on the mic, she told me that after a year of investigating, she had failed to find a smoking gun. She found nothing that either condemned Adnan for certain, and nothing that exonerated him for certain.

It was not a punch to the gut, necessarily, but a quiet closing of a chapter that I had held open for 15 years. In the midst of the enormous coverage of the case and show, of hearty congratulations for staying on it, of lots of movement by the different teams of lawyers now working to help Adnan, I felt like a failure.

After making the decision unilaterally to get media involved, I’ve felt heavily responsible for the pain it’s forced Adnan and his loved ones to go through. It would be worth it, I hoped. Something concrete would surface. Koenig wouldn’t tolerate the fuzziness. She would dig till she struck rock.

It never seemed like a possibility that the only thing digging deep would do is bring up more mud, cloud up the air further. A single point of clarity is what I hoped for, and that eluded me. It eluded Koenig.

I’ve been asked a number of times if I regret taking the case to her. On that count, I say absolutely not. As disheartening as it is that no smoking gun was found, the case has ironically been brought back to life because of the mud, not in spite of it. If reasonable doubt existed 15 years ago, it abounds now.

Other attorneys blogged about the inconsistencies in the investigation, and in the trial. National organizations have come forward, compelled by the religious bigotry that the state injected into the case. The Innocence Project is pushing forward with testing DNA evidence. Volunteer lawyers and firms have stepped up to advocate for Adnan and develop a grassroots campaign for him. Old classmates and friends, and even old lawyers, of Adnan have come forward to help. The post-conviction appeal has gotten new life thanks to the Court of Special Appeals taking an interest and because of Koenig’s interview with Asia McClain. And I’ll continue to blog, sharing documents and information, updating people on Adnan and his case.

Not all is lost then. We are back to where we were before Koenig, before Serial. Back in court, but this time with millions of eyes watching. It’s nearly impossible to tell how all of the legal machinations will bear out, there are many ways this could go. But it is going, slowly but surely, somewhere.

In that same last interview Koenig did with me, she asked me if I would ever walk away from the case, from Adnan. I told her that if it was proven to me irrefutably that he was guilty, I would walk away. A little later, over tea, I asked her what would happen after Serial. Would she walk away? She said no. And the chapter I thought permanently closed opened back up again, if only a little.

Read next: 7 Great Podcasts To Get Hooked On Now That Serial’s Over

Write to Rabia Chaudry at chaudry@newamerica.org. 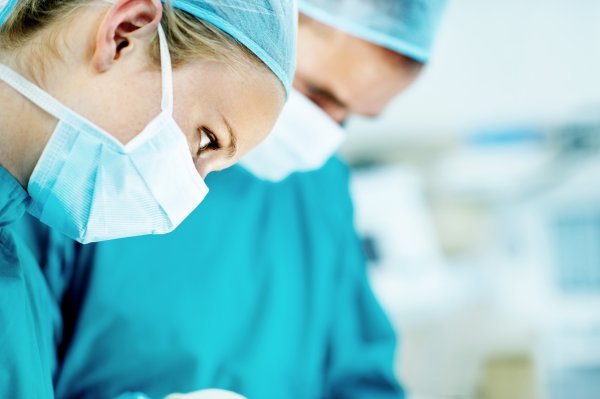 Changing the Face of Medical Education in the U.S.
Next Up: Editor's Pick