U.S. President Barack Obama speaks to the nation about normalizing diplomatic relations the Cuba in the Cabinet Room of the White House on December 17, 2014 in Washington, DC.
Pool—Getty Images
Ideas
By Elliott Abrams

President Obama’s moves on Cuba represent an abandonment of the Cuban people and a lost opportunity to move that island toward democracy.

Assume for the moment that it was time to change the U.S.-Cuban relationship. Assume that the hostage/prisoner exchange was justified. The Obama moves still fail the test, because they gave the Castro regime everything—in exchange for nothing.

The President could have announced the opening of diplomatic relations and an exchange of ambassadors as a new day in the bilateral relationship. As to the economic relationship, he should have said it will develop as a political opening develops in Cuba. That is, as political prisoners are released, as Internet access is allowed, as violent repression of dissident voices like the “Ladies in White” ceases, our embargo will be cut back and perhaps disappear. This would have given the regime an incentive to reduce its oppression. But the way Obama proceeded, he announced all the regulatory and financial changes right now—unrelated to what Castro does. And it is notable that though Obama referred in his remarks to Internet access and a release of 53 prisoners in Cuba, Castro did not. He was dead silent about any internal reforms.

Defenders of the President argue, as he did himself, that an economic opening in Cuba will produce political reform. Really? Has it in Vietnam? Has it in China? There is simply no reason to believe that as the Castro regime gets more cash, it will become less repressive. In fact, the President could not have chosen worse timing. When the Soviet Union collapsed, Cuba was rescued by money and oil from Hugo Chavez in Venezuela. Today Chavez is dead, his successor is reeling from the collapse in oil prices, and Castro could look forward to hard times and public pressure for change. Instead, he was rescued by Barack Obama. And to repeat, the money will flow into Castro’s hands whether there are reforms—or none at all.

The President said the United States would press for change in Cuba more effectively now, and with Latin American help. This is not a credible claim. The leftist governments of Brazil, Argentina, Chile, Venezuela, Ecuador, and Bolivia have never pressed for political freedom in Cuba and they won’t start now just because Barack Obama has changed U.S. policy. Nor is it credible that the United States itself will now push harder. The Obama administration famously did not push for political reform in Mubarak’s Egypt, nor in the Muslim Brotherhood regime of Mohammed Morsi; it missed the chance to back the Iranian people when masses protested the stolen election of June 2009; it has done little to press for freedom in Venezuela or anywhere else in this hemisphere; and pressure for change in China has been weak. In fact, U.S. human rights policy has been limp during the Obama years and there is no reason to expect it to change now, in Cuba or anywhere else.

For over half a century Cubans have resisted the Castro regime and kept hope of freedom alive. In this they had the full support of the United States. In addition to the Cubans who were forced to flee, thousands have spent years in prison for the crime of seeking liberty. This week the United States abandoned them, seeking to engage not the Cuban people or the Cuban freedom fighters, but the Castro regime.

Obama argues that we were smart to change policy because the regime had not collapsed after more than 50 years of an American trade embargo. That argument ignores the growing pressure on Castro that an end to Venezuelan aid would have created. And it ignores history. In the 1980s, many analysts thought Ronald Reagan wrong, even dangerous, when he talked about the collapse of the Soviet Union. In 1991, it was gone. But the Cuban regime has just been given a new lease on life by President Obama. It was a sad day for freedom in Cuba. 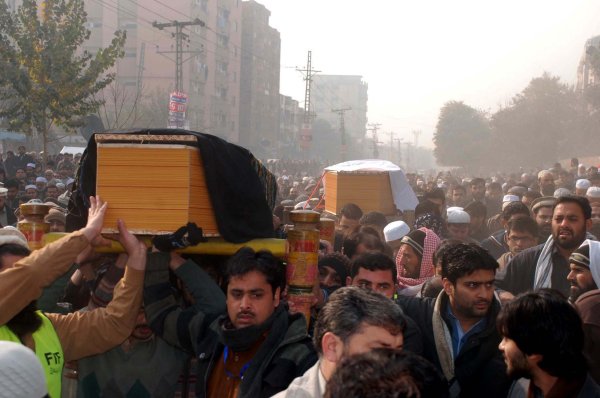 Pakistan's 'War on Terror' Only Encourages Jihadists
Next Up: Editor's Pick