“We have two presidents: Fidel Castro and Hugo Chávez,” declared Cuba’s then Vice President Carlos Lage in a visit to Caracas just under a decade ago. A couple of years later, in Havana, then Venezuelan President Hugo Chávez added, “At heart, we are just one government.”

It is likely not a coincidence that talks between the United States and Cuba—which culminated yesterday in an announcement that the two countries would begin to resume full diplomatic relations—began just after the death the former Venezuelan president who had bankrolled Cuba’s Revolution.

Today a beleaguered Venezuela no longer has the spare cash to fund the island’s beleaguered economy. The Castros likely realized this as Chávez’s presidency was coming to an end and were not keen for a return to the scarcity of the euphemistically titled Special Period of the 1990s, after the collapse of Cuba’s first patron, the Soviet Union. “We had nothing, no food and no money,” one elderly man told me in Havana not long ago. The Cuban economy contracted 35 percent between 1989 and 1993, and oil imports decreased 90 percent. Cuba was in desperate need of money.

Chávez, then a nascent politician on the make in Venezuela, saw Castro as a political mentor, a simpatico ally against the elites and imperialists who he blamed for the world’s ills. Chávez also oversaw some of the world’s largest oil reserves. Venezuela currently sends almost 100,000 barrels per day of oil to the island—more than half of Cuba’s consumption—as well as aid thought to be worth in total between $5 billion and $15 billion a year, or some 15% of Cuba’s GDP. (More precise figures are hard to come by given the opacity of both governments.)

But Chávez is dead, and today Venezuela’s economy is in tatters, exacerbated by a fall in the price of oil, which provides 96% of Venezuela’s foreign revenue. The country’s local currency on the black market has fallen 35% in the last month; annual inflation is at more than 60% and there is serious talk of default on Wall Street. Many economists are talking of a “perfect storm” brewing for current Venezuelan President Nicolas Maduro, whose approval ratings have fallen to the mid-twenties.

The lack of guaranteed support from Caracas would have made Cuban President Raúl Castro “much more eager to negotiate and given the U.S. leverage,” said Ted Henken, President of the Association for the Study of the Cuban Economy and author of several books on Cuba.

As Havana makes peace with Washington, Venezuelan authorities are left increasingly isolated. While Cuba and Venezuela held onto leftist principles, other countries in the region have in recent years taken more pragmatic policy decisions. “Obama has pulled the rug out from under Maduro,” said Christopher Sabatini, Senior Director of Policy at the Council of the Americas. “It’s going to be a lot easier for other U.S. allies in the region to swing away from Venezuela.”

In the last couple of weeks, in response to sanctions by Washington on top Venezuelan officials for alleged human rights abuses, Maduro has rallied against the U.S. “It shows a lack of respect!” boomed the mustachioed president to a few thousand supporters in Caracas on Dec. 15. “They can shove their US visas.” On Wednesday, though, Maduro praised Obama’s “gesture” towards Cuba. “How sad it is to have a government who 72 hours ago launched an anti-imperialist diatribe against Obama and now describes him as ‘courageous,’” said Jesús Torrealba, head of Venezuela’s opposition coalition.

Cuba learned its lessons from the Special Period and in recent years began to diversify. On the ground, rules have been loosened on private restaurants, guesthouses and the buying and selling of property. Cubans are even allowed Internet access, though only about 5 percent of the country can reach the Web. On a more global scale, international investors have come in; the Scarabeo 9 oil rig sailed into the Florida Straits in January 2012. It was Chinese-built, Italian-owned, and was to be used by Spanish, Norwegian and Indian firms, among others.

Cuba was likely well aware those small reforms would not be enough in the long run. There are a mixture of elements that have come together to allow this historic moment: from Obama and Cuban President Raúl Castro themselves to mediators in the Vatican and Canada. Yet, the unwitting spur for the restoration of relations between the U.S. and Cuba may be Hugo Chávez himself, and the inability of his successors to manage Venezuela’s economy. 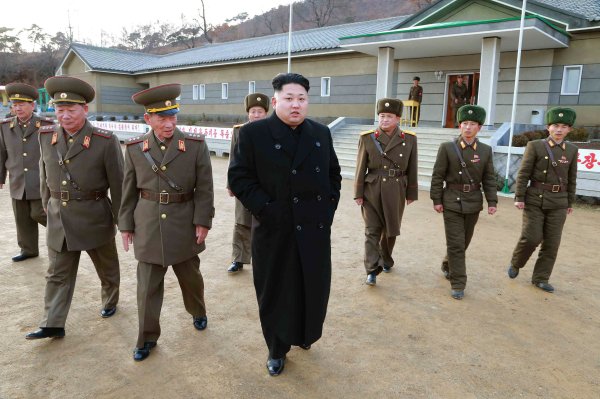 The Interview May Be Funny; North Korea and Kim Jong Un Are Not
Next Up: Editor's Pick