The Interview May Be Funny; North Korea and Kim Jong Un Are Not

If you were hoping to spend Dec. 25 at a movie theater watching a comedy about the violent death of a dictator, you are out of luck.

Sony Pictures on Wednesday announced it is pulling The Interview, the Seth Rogen and James Franco film linked to a massive hack and threats of violence on U.S. soil. The decision came as authorities investigate whether or not the threats are credible, and in advance of solid evidence about who is responsible for the attacks. U.S. intelligence officials believe it was North Korea; others (including the smart folks at Wired) say the links are tenuous at best.

I’ll leave the cyberforensics to the pros and steer clear of questions about the film itself. I have not seen it (though TIME’s esteemed critic, Richard Corliss, has), and though I suspect scholars will have a field day dissecting The Interview‘s handling gender and race, I defend the studio’s right to make movies about whatever they choose. The Interview may be, as Corliss writes, a “parade of ribald gags,” but Americans, unlike North Koreans, are free to watch such fare. Ribald is nothing.

As a Beijing-based correspondent who often writes about North Korea, the interesting bit is how the fury surrounding the film casts light on how we think about the Democratic People’s Republic of Korea (DPRK), as the country is officially known. Despite its axis-of-evil pedigree, its truly egregious human-rights record, and a nuclear weapons program, North Korea is more of a punch-line than a policy priority or topic for serious, sustained discussion. And that, I reckon, is what’s really dangerous.

It is not the jokes, exactly, but the fact that they play into a narrative that wildly underestimates, or willfully ignores, North Korea. Asked by the New York Times about the fallout from the film, Rogen, said the backlash was “surreal, “not something that we expected at all.” Few expected a hack of this magnitude, sure. And Kim Jong Un’s regime may not be directly responsible for this particular attack. But his country is indeed experienced in cyberespionage. And yet, Rogen could not fathom that they’d lash out?

In a roundabout way, Rogen’s quote reminded me of comments by Merrill Newman, the 85-year old veteran who spent two months as a detainee in Pyongyang before being released in December 2013. During the 1950–53 Korean War, Newman led South Korean fighters operating behind enemy lines. North Korea hated the unit. Yet, according to The Last P.O.W., a new Kindle Single written by longtime foreign correspondent Mike Chinoy, Newman entered as a tourist unconcerned that he could run into trouble with the regime, let alone be arrested and detained for war crimes.

Some DPRK basics: for North Korea, the Korean War, also known as the Fatherland Liberation War, never ended. There was an armistice agreement, but it was meant to be temporary; a peace treaty was not signed. North Koreans are taught that the country’s founder, Kim Il Sung, was a masterful general who repelled two waves of foreign invaders, the Japanese, and then the Americans and South Koreans. His son, the late dictator Kim Jong Il, and his grandson, current leader Kim Jong Un, stayed in power in part because they’ve convinced their people that the U.S. military and its South Korean allies could return at any moment, and only a strong leader — a veritable God among men — can keep them safe.

As much as he’s revered at home, Kim Jong Un is infantalized by outsiders. When he came on the scene in late 2011, biographical details were scarce. We knew that he was probably in his late 20s, that he spent part of his adolescence at a boarding school in Switzerland, and that he might like basketball. From these clues were cobbled a narrative that felt credible: he was young, malleable, and maybe more open to the West. TIME put him on the cover under the tagline “Lil Kim.”

It’s worth considering how wrong we were to dismiss him. There is no question that Kim Jong Un is younger than your average autocrat. But he did not emerge, baby-faced and bumbling, from nowhere. He was raised by dictator Dad in a family where shooting is the preferred pastime. At some point after his stint in Switzerland, he attended his country’s most prestigious university, the Kim Il Sung Military Academy. After purging his uncle, touring sad-looking factories, or disappearing for a while, people were quick to count him out. Each time, he proved us wrong. His long-suffering country is still in a tenuous position: the economy is weak, and thanks to the porous border with China, ordinary people have more access than ever to foreign goods and ideas. Hunger persists, health care and education are rudimentary or absent, especially in rural areas, and people have almost no political or civil rights. These are serious and enduring problems. But from a North Korean perspective, the leader is strong.

If you need to crack a Kim Jong Un joke this holiday season, I get it. We tend to joke about things that are strange, things that scare us, and things that we don’t quite understand. But do so with an eye to what’s really going on north of the 38th parallel. The Interview may be funny. North Korea definitely is not.

Read next: Everything We Know About Sony, ‘The Interview’ and North Korea 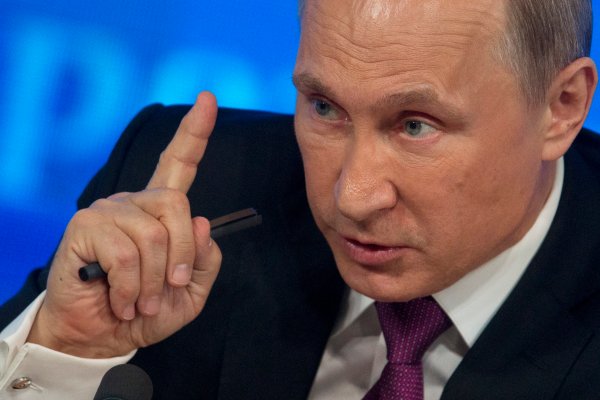 Putin Shows Stick to West, Carrot to Oligarchs, and Heart to 'Someone'
Next Up: Editor's Pick