Sony Should Stream The Interview — Now

A poster for the movie The Interview is taken down by a worker after being pulled from a display case at a Carmike Cinemas movie theater on Dec. 17, 2014, in Atlanta
David Goldman—AP
Ideas
By James Poniewozik

The hacking of Sony and the threats against theaters planning to screen The Interview is arguably America’s first literal culture war. And the battle just claimed a big casualty: Sony announced, after several distributors pulled out, that it was canceling the Dec. 25 release of the Seth Rogen comedy, which depicts the assassination of North Korean leader Kim Jong Un.

Plain and simple, free speech lost a battle here. It may have been inevitable, after the massive cyberattack on Sony’s computer data was followed by violent threats against theaters. The fear of violence and legal repercussions — and, maybe, the aura of danger created by the hacking — was enough for major theater chains to pull out. Sony, already in a corporate nightmare, was running out of places to screen the movie. None of this was especially brave, but it was corporations acting as corporations do, in their interest, not on principle.

But in a statement after the decision, Sony argued that there was a principle at stake: “We are deeply saddened at this brazen effort to suppress the distribution of a movie, and in the process do damage to our company, our employees, and the American public. We stand by our filmmakers and their right to free expression and are extremely disappointed by this outcome.”

O.K., then: if Sony supports the American public and its filmmakers’ right to free expression, then it should let the American people see their filmmakers’ work. In our living rooms, if necessary. If theaters are afraid to show The Interview, make it available, as soon as possible, through home streaming on demand.

The technology is in place. The legal and business arrangements may be more difficult (one reason that studios have avoided immediate VOD release, ironically, is resistance from theater chains), but reportedly Sony has considered it as an option.

Sony’s absolutely right that this is an effort to suppress a movie. And right now, after their action, it’s worked. Which gives angry parties — foreign states or anyone with an axe to grind — incentive to do it again. (Already, a Steve Carell thriller set in North Korea has been scuttled.)

Maybe Sony is waiting to see if it can put the film in theaters later; maybe it’s afraid of further cyberrepercussions. But if this is an issue of principle, then act like it. Americans have broadband, big-screen TVs, and plenty of free time around Christmas. Give us the chance to make our own statement, if we so choose, to show that we don’t want bullies squelching our expression.

Artists and audiences lost an unprecedented battle here. But we can still win the war, even if we have to do it in our living rooms. 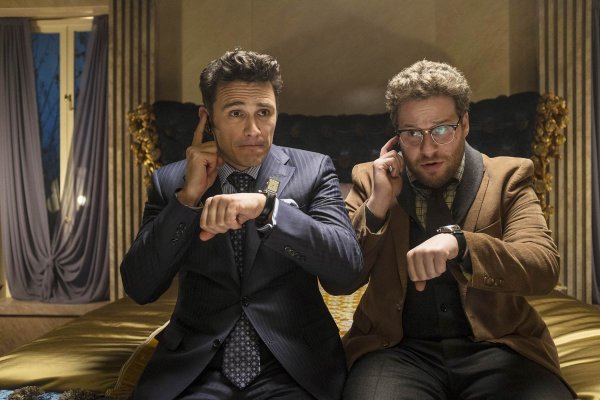 Review: The Interview, The Movie You Almost Never Got to See
Next Up: Editor's Pick