Review: Did Anyone Have a Good Time Making Night at the Museum 3?

M.C. Escher’s “Relativity,” the 1953 lithograph that plays with gravity and perspective, receives a delightful tweak in Night at the Museum: Secret of the Tomb. Larry the night watchman (Ben Stiller) and his antique colleagues Teddy Roosevelt (Robin Williams) and Sir Lancelot (Dan Stevens) tumble into and scramble through the sideways stairways of Escher’s surreal courtyard. The scene is a compact epiphany of physical, borderline-metaphysical comedy — nearly as funny and impressive as Andrew Lipson and Daniel Shiu’s LEGO version of “Relativity.” Pushing the trope further, the producers commissioned a clever elaboration that’s used as a poster for the movie. Congratulations to all involved!

Sorry, but this concludes any warm comments about the third episode in the Night at the Museum series, a kid-aimed fantasy franchise that imagines the stuffed or wax figures at New York’s American Museum of Natural History coming to life and cavorting each night. Director Shawn Levy extended the 2006 original with a 2009 sequel set in Washington’s Smithsonian Institution. Because the two films earned almost $1 billion at the global box office, simple corporate math demanded a third installment, this time with a trip to the British Museum. The world tour might have extend to the Louvre or the Hermitage in future sequels, but apparently this is it.

A good thing too, since Secret of the Tomb gives every evidence of franchise exhaustion. In the screenplay by David Guion and Michael Handelman, Larry and the gang travel to London to find out why the ancient Egyptian tablet that is the source of the museum figures’ revived lives has gone on the fritz. At the British Museum they encounter Lancelot, who has hard time adjusting to the 21st century and comes close to bolloxing Larry’s mission to save his old, old friends. The movie is content to reprise bits from the first two entries, and the few innovations — such as giving Larry a caveman double (also played by Stiller) — are rote, trite and feeble.

Did anyone have a good time making this movie? The actors seem to be reading their lines at gunpoint, in an enterprise whose mood is less summer camp than internment camp. Such exemplary comic spirits as Ricky Gervais (the AMNH’s director), Steve Coogan (the Roman soldier Octavius) and Owen Wilson (the antique cowboy Jedediah) have the look of abandonment, as if hoping that some prompter from the sides will whisper a line more deliverable than what the script has told them to say. “Get me a rewrite!” say these faces, frozen in a rictus of embarrassment.

Mickey Rooney, who died in April at 93, makes a brief appearance here in a wheelchair. Williams, in the last on-screen role he completed before his death this Aug., seems unusually muted, but he simply could have been interpreting the character as written. (The movie is dedicated to these two comedy immortals.) The only performers who suggest they’re enjoying themselves are Dick Van Dyke, in a spry cameo as a Natural History night watchman emeritus, and Crystal the Monkey, a scene-swiping Capuchin whose capers include peeing on the tiny figures of Octavius and Jedediah, during a Pompeii lava scene, and planting big smooches on every human in sight.

I could go on, but making jokes about failed movies is not my favorite part of this job. Besides, you already get the idea. Some day soon, the “Relativity” scene will be on YouTube. See that part of Night at the Museum: Secret of the Tomb and skip the rest. 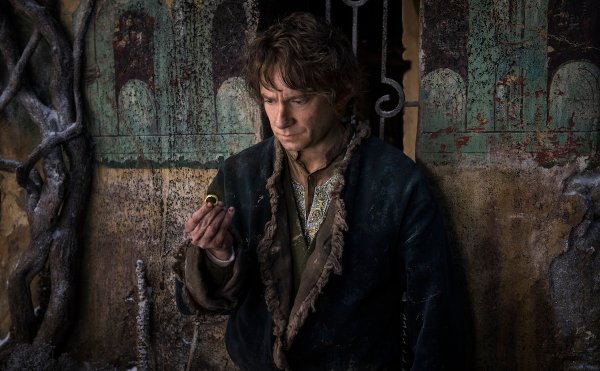 Here's the Perfect Word to Describe Watching The Hobbit
Next Up: Editor's Pick