These Are the Theaters That Have Pulled The Interview After Threat

An increasing number of movie theaters and chains are deciding not to show Sony Pictures Entertainment’s The Interview, following a threat believed to come from the same group claiming responsibility for a devastating hack against Sony.

The Regal, AMC, Cinemark and Carmike theater chains won’t show The Interview until federal law enforcement groups finish their investigation of the threats made against the film, the Wall Street Journal reported citing anonymous sources Wednesday. Those chains control nearly half of the movie screens in the U.S., according to the Journal.

NBC News previously reported that Carmike had decided to pull the plug on The Interview. Deadline reported late Tuesday that California’s ArcLight Cinemas, which runs five theaters across the state, also won’t show the film, but a spokesperson later said no official decision had yet been made.

Meanwhile, Landmark Cinemas has cancelled The Interview’s New York City premiere, which was set for Thursday evening. That cancellation comes as the film’s co-stars, Seth Rogen and James Franco, already backed out of several media events around the films.

The threat, which may or may not have come from the same people who hacked Sony Pictures, intimated at the possibility of attacks on theaters that choose to show the movie, a completely fictional comedy about journalists recruited by the CIA to assassinate Kim Jong Un. “We recommend you to keep yourself distant from the places at that time,” read the message, with “the places” apparently referring to theaters showing the film. The message also invoked the attacks of Sept. 11, 2001.

While Sony is at this point going ahead with the film’s Christmas Day release, sources told NBC News that the company won’t punish theaters that back out. The Department of Homeland Security, meanwhile, has said there’s no “credible intelligence” regarding an attack on movie theaters in the U.S.

The threat also coincided with a new release of Sony employees’ emails, several weeks after hackers breached Sony Pictures’ systems and posted troves of company and employee confidential data online. Early reports linked the hacks to North Korea, which is reportedly furious over The Interview’s plot about killing the North Korean leader. However, North Korea denied conducting the attack, and the little evidence thus far tying the country to the incident is circumstantial.

The total fallout of the Sony attack is still incalculable, but it could amount to the most damaging corporate cyberattack in history. 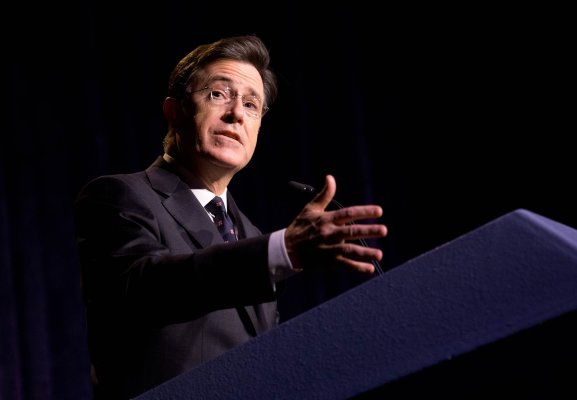 Stephen Colbert on Campaign Finance
Next Up: Editor's Pick