Shoes lie in blood on the auditorium floor at the Army Public School, which was attacked by Taliban gunmen, in Peshawar, Dec. 17, 2014.
Fayaz Aziz—Reuters
By Omar Waraich

As the 141 children and teachers who were killed in Pakistan’s deadliest terrorist attack at a school in Peshawar were buried by their bereft parents and relatives on Wednesday, the deep sadness and grief that has affected everyone in Pakistan gave way to outrage against the Pakistani Taliban militants who took responsibility for the attack.

In a rare show of unity, Pakistan’s political leaders came together to declare that they were setting aside their rivalries to unite behind a joint plan to eliminate terrorism. The country’s Prime Minister, Nawaz Sharif, said all militants were now targets, which marked a significant break from Pakistan’s history of backing militants such as the Afghan Taliban while attacking the Pakistan Taliban, what many in the West have criticized as Pakistan’s “double game.”

The mood in Peshawar was somber after the funerals. Pakistanis from all over the country traveled to the city to offer their condolences. Small crowds chanted slogans in protest, while others quietly sat with grieving families. In Pakistan’s other cities, people gathered to hold solemn candlelight vigils, bearing placards that mourned the dead and demanded action against their killers.

Ali Sajid, 34, a painter in Peshawar, said that the entire city is consumed by sadness and anger. He had seen several terrorist attacks before but this time the militants targeted children. “This will definitely change things,” says Sajid. “I think this city has bled enough, and rendered many sacrifices.” Now, he added, “the government and the security forces should launch an offensive against the militants and force them to perish.”

“There will be no distinction between ‘good’ or ‘bad’ Taliban,” Sharif said at a press conference after meeting with leaders of rival political parties.

“Everyone is in tears,” says Daniyal Aziz, a lawmaker from the ruling Pakistan Muslim League-Nawaz party. “This is a defining moment for Pakistan. The sadness has turned into anger very quickly.”

Sharif won the support of such inveterate opponents as former cricketer Imran Khan, who has spent the past six months leading street protests aimed at pushing the Prime Minister out of power. At the height of those protests, Khan even challenged Sharif to a public duel. On Wednesday, they were sitting side by side at Wednesday’s political conference in Peshawar and referring to each other in respectful tones. Khan later abandoned his party’s nationwide protests against the government in a demonstration of national unity.

The fallout from the Peshawar massacre shows just how far Pakistan has come over the past 18 months. Back then, both Sharif and Khan had been trying to court the Taliban to get them to sign a peace agreement. Now, like the secular politicians they once criticized, they have resolved that there can be no reconciling with the murderers of children. “There are moments, like this tragedy, when it becomes incumbent on everyone to come together,” Khan told journalists at the press conference.

The Pakistan military, which ran the school that was attacked, launched airstrikes on militant targets in the tribal areas along the Afghan border on Tuesday night. Gen. Raheel Sharif, the army chief, flew to Kabul with his intelligence chief to demand that Mullah Fazlullah, the leader of the Pakistani Taliban who is believed to be hiding in eastern Afghanistan, be handed over. There is greater cooperation between Pakistan and the U.S. now, too, with drone strikes targeting Pakistani Taliban bases in Afghanistan on Tuesday night.

Some observers are wary. There have been many false dawns before when Pakistanis first thought that large-scale terrorist tragedies would mark a turning point before the political resolve dissipated. But many are confident that the massacre in Peshawar has changed Pakistan forever. “We hope that this is the case,” says Sherry Rehman, an opposition politician and former ambassador to Washington. “It’s the only thing that can be done.”

But if the deaths of so many children at school cannot change Pakistan, then nothing will. “This is now make or break,” Rehman said. “It’s really a point of no return.”

In defiance of the anger from Peshawar, Mohammad Khurasani, the Taliban spokesman, warned Pakistan to expect more attacks on military targets: “We are still able to carry out major attacks. This was just the trailer,” he said on Wednesday. Pakistan’s resolve remains strong but it will likely suffer many more deaths before it achieves peace.

Read next: Peshawar Survivors and Bereaved Tell of the Massacre’s Horror 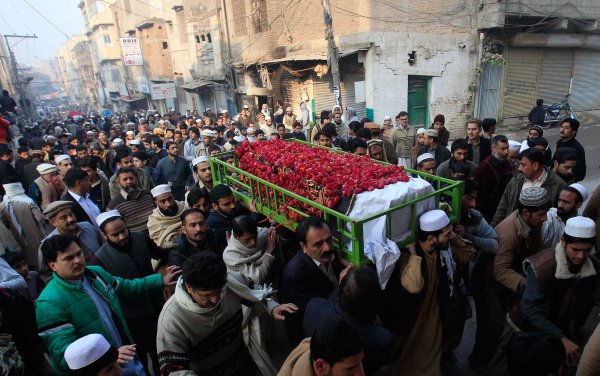 Pakistan Begins 3 Days of Mourning After Massacre
Next Up: Editor's Pick