Australian Prime Minister Tony Abbott has said that the nation’s gun laws and national security policies are up for serious review after a disturbed man, on bail for being accessory to a murder and facing other charges, was able to acquire a firearm and take over a central Sydney café on Monday, leading to the deaths of two hostages.

The Prime Minister told reporters Wednesday that it troubled him to be unable to explain how Man Haron Monis managed to get off watch lists, despite a well-documented history of extremist beliefs, mental problems and violent behavior. He has ordered federal and New South Wales officials to conduct a massive review of how Monis went for years unnoticed by the authorities.

“Plainly, there are questions to be asked,” said Abbott. “And I want answers to those questions.”

Among those questions, he said, is how “someone involved in a horrific murder” and out on bail was allowed to have a gun license.

At the time Monis entered the Lindt Chocolat Café in Martin Place, taking 17 people hostage at gunpoint, he was awaiting trial for acting as an accessory to the murder of his former wife, Noleen Hayson Pal. He was also facing more than 40 sexual-assault charges involving seven alleged victims.

Abbott also said it was unclear why Monis was dropped from Australia’s terrorism watch list in 2009. Monis, who is Iranian-born, was added to the list in 2008 and 2009, after he sent threatening letters to the families of dead armed service members. He was sentenced for that crime in 2009 and lost his last appeal just days before the attack.

“He was being looked at,” said Abbott. “I don’t know why he dropped off the watch list. I really don’t.”

Monis, 50, was killed along with the café manager and another hostage when police broke the 16-hour standoff and stormed the café in the early hours of Tuesday.

Abbott said he could neither confirm nor deny that Iran had at one point sought to extradite Monis, saying only that Monis “has a very jagged history.”

The Iranian police have said they sought Monis’ extradition 14 years ago for fraud and “violent” offenses, but were rebuffed by authorities in Australia, where Monis received political asylum and lived on public benefits. Abbot said Tuesday that Monis appeared to be “having a lend at us,” using a colloquial Australian phrase meaning to fool or trick. 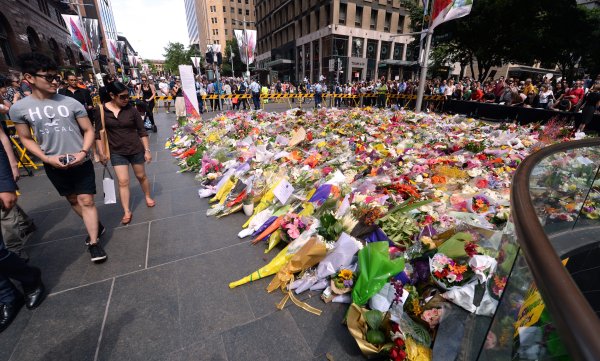 Stop Linking the Sydney Siege to Islam
Next Up: Editor's Pick