An attack on a school in Peshawar, Pakistan, early Tuesday morning has left more than 120 people dead, most of them children. The attack, which the Taliban claimed responsibility for, saw a number of militants wearing military uniforms open fire and detonate explosives at the Army Public School.

Farooq Shah, a local doctor whose 16-year-old son Mubeen was killed in the attack, spoke to TIME on Tuesday and said:

Resisting fear could prove difficult, as reports on social media and from local journalists have painted a horrific picture of the attack:

A student of Army Public School, 16-year-old Shahrukh Khan, spoke to the AFP from Peshawar’s Lady Reading Hospital, where he was being treated for his injuries. He said that he and his classmates were in the school auditorium when four gunmen wearing military uniforms entered:

Khan said he waited until the men left, before trying to find help. “When I crawled to the next room, it was horrible. I saw the dead body of our office assistant on fire,” he told the AFP. “She was sitting on the chair with blood dripping from her body as she burned.”

The BBC reported early on Tuesday that the school was attacked because it is an army-run institution, which has been confirmed by the Pakistani arm of the Taliban:

The Pakistani army has been sending updates, via their chief spokesman, about their efforts to rescue children and stop the attackers:

As the rescue operation has been underway, many parents have been frantically searching for their children outside the school, which was sealed off with an unknown number of hostages still inside. Pakistan’s Express Tribune has this video interview with a mother and a grandmother, who’ve arrived at the school to find their sons and grandchildren

Meanwhile, nearby hospitals, which have received a number of the victims, have reportedly begun posting lists of the deceased. One doctor at the Lady Reading Hospital in Peshawar told the BBC that some of the wounded and deceased who were brought in had been shot in the head and chest, while others were killed in a suicide bomb attack on the school playground.

Others have tweeted images of long lines of people at the Combined Military Hospital and at local blood banks queuing to give blood:

Footage from the Express Tribune reveals the chaos in the hospitals treating the injured:

Another video, uploaded to YouTube, shows more scenes of grief and turmoil at the Lady Reading Hospital as the injured are treated and the deceased are carried out in coffins:

The BBC’s Pakistan correspondent Shaimaa Khalil reports that traffic jams have blocked many of Peshawar’s streets:

-with reporting by Nilanjana Bhowmick. 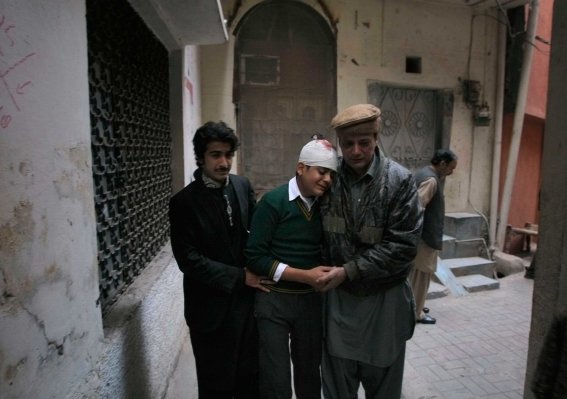 Chaos in Peshawar as Taliban Slaughter Dozens in School Attack
Next Up: Editor's Pick