A hostage runs to tactical response police officers for safety after she escaped from a cafe under siege at Martin Place in Sydney, Australia, on Dec. 15, 2014.
Rob Griffith—AP
By David Malet
IDEAS
David Malet is Senior Lecturer in International Relations and Associate Director for Academic Programs of the Melbourne School of Government. He is the author of Foreign Fighters.

Australia’s first successful modern domestic terrorist attack has raised alarms internationally—and not because of how formidable the attacker was. This was a man, after all, who had to demand police supply him with his own ISIS banner. What he demonstrated, however, is just how easy it is to attract global coverage. That the siege was the work of a troubled lone wolf and not the product of a transnational plot was both a relief and a worry. It was a relief because there no major terrorist operation had been pulled off undetected, and there was no immediate recourse to a beheading video. It was a worry because today’s era of crowd-sourced terror has reached the point at which the old models no longer apply. Any attention-seeking individual simply needs to appropriate an established jihadi brand name to force the world to pay attention to his 15 minutes of “selfie-sacrifice.”

Why NATO Is Essential For World Peace, According to Its Former Commander

Early during the ordeal, Prime Minister Tony Abbott declared that the hostage taker—one of whose demands was a phone call with the leader—had political motives, and it was not difficult to imagine what they might be for a terrorist with what resembled the ISIS flag.

Then, shortly before the murders that ultimately ended the attack, Australian media identified the gunman as 49-year-old Man Monis, who had arrived in Australia as a refugee nearly 20 years earlier. Monis had a history of Islamist incitement, including hate mail sent to the families of slain Australian soldiers, and was facing charges of killing his ex-wife and for sexual assault. In one of his aliases, he had claimed to be an ayatollah, a Shiite religious rank that would make him a target of attack for the Sunni jihadis of ISIS.

Suddenly the threat seemed less about the Islamic State and more about an individual’s mental state.

Australians say that theirs is the Lucky Country, and until yesterday it certainly was. There had been major terrorist plots discovered and prevented here since at least the 2000 Sydney Olympics, including plans for a campaign of bombings and mass shootings, a thwarted suicide attack on an army base by foreign fighters returned from Somalia, and ISIS volunteers posing with evidence of their war crimes on Twitter and urging attacks Down Under. Australians have been one of the largest nationalities per capita among the foreign fighters in the Syria-Iraq quagmire.

In September, a massive security operation prevented an ISIS-linked plot to behead a random bystander and post the footage to social media in the same pedestrian mall where the chocolate shop standoff took place. Immediately thereafter, a Melbourne teenager posing on Facebook with an Islamist black flag and expressing a desire to join ISIS was pulled in for questioning and stabbed a police officer in the face before being gunned down. In response, the government passed the Foreign Fighter Act that expanded surveillance and detention powers like the USA Patriot Act, made it easier to revoke passports, and allowed conviction and imprisonment for simply being in regions of the world deemed no-go zones by the foreign minister. But many Australians continued to insist that theirs was “a safe country.”

Among those who would likely disagree with that assessment would be some members of Australia’s large Lebanese immigrant community, from which a few major families or clans have been involved in most of the major plots. Simmering tensions between Lebanese and European Australians erupted into beachfront race riots in 2005, and a sense of “other-ness” remains evident in attitudes toward Muslim Australians, who are often referred to as Muslim as opposed to Australian in public debates on community relations.

The siege in Sydney took place in this highly polarized atmosphere, and also at a time when—despite recent promises to the contrary—there are also Australian “boots on the ground” in Iraq again. Someone hoisting an Islamic banner and threatening violence if he does not get to speak to the prime minister would have been hard pressed to work every pertinent issue into one brief phone call. There was no chance that he would have had any of his demands met.

Most terrorism analysts restrict their definition of a terrorist to someone working in a tightly controlled organization or operating out of a looser network, with lone wolves historically dismissed as psychopaths acting out revenge fantasies cloaked in political justification. The events in Sydney appear to have borne out this perspective.

But the gunman did manage to prove that all one needs to grab global attention in the 2010s is to make threats in a coffee shop while claiming to be the Islamic State in Perth or al Qaeda in Peoria. Just bring any old black flag. This incident should really be a red flag, because copycats are sadly inevitable. And it is hard to see the light at the end of the tunnel.

David Malet is Senior Lecturer in International Relations and Associate Director for Academic Programs of the Melbourne School of Government. He is the author of Foreign Fighters. 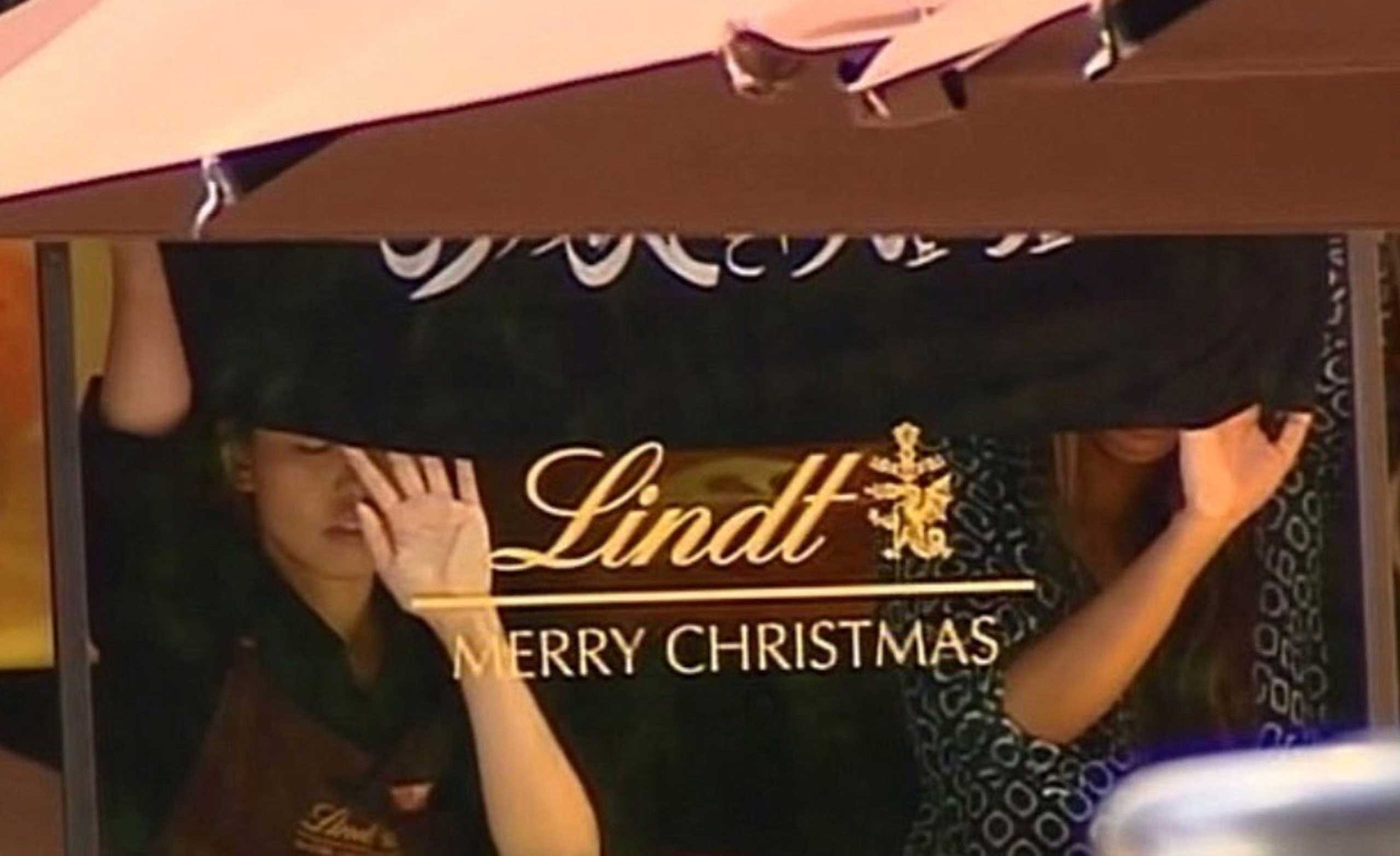 This screengrab taken from the Australian Channel Seven broadcast shows hostages holding up a flag with Arabic writing inside a cafe in the central business district of Sydney on Dec.15, 2014.
Channel Seven/AFP/Getty Images 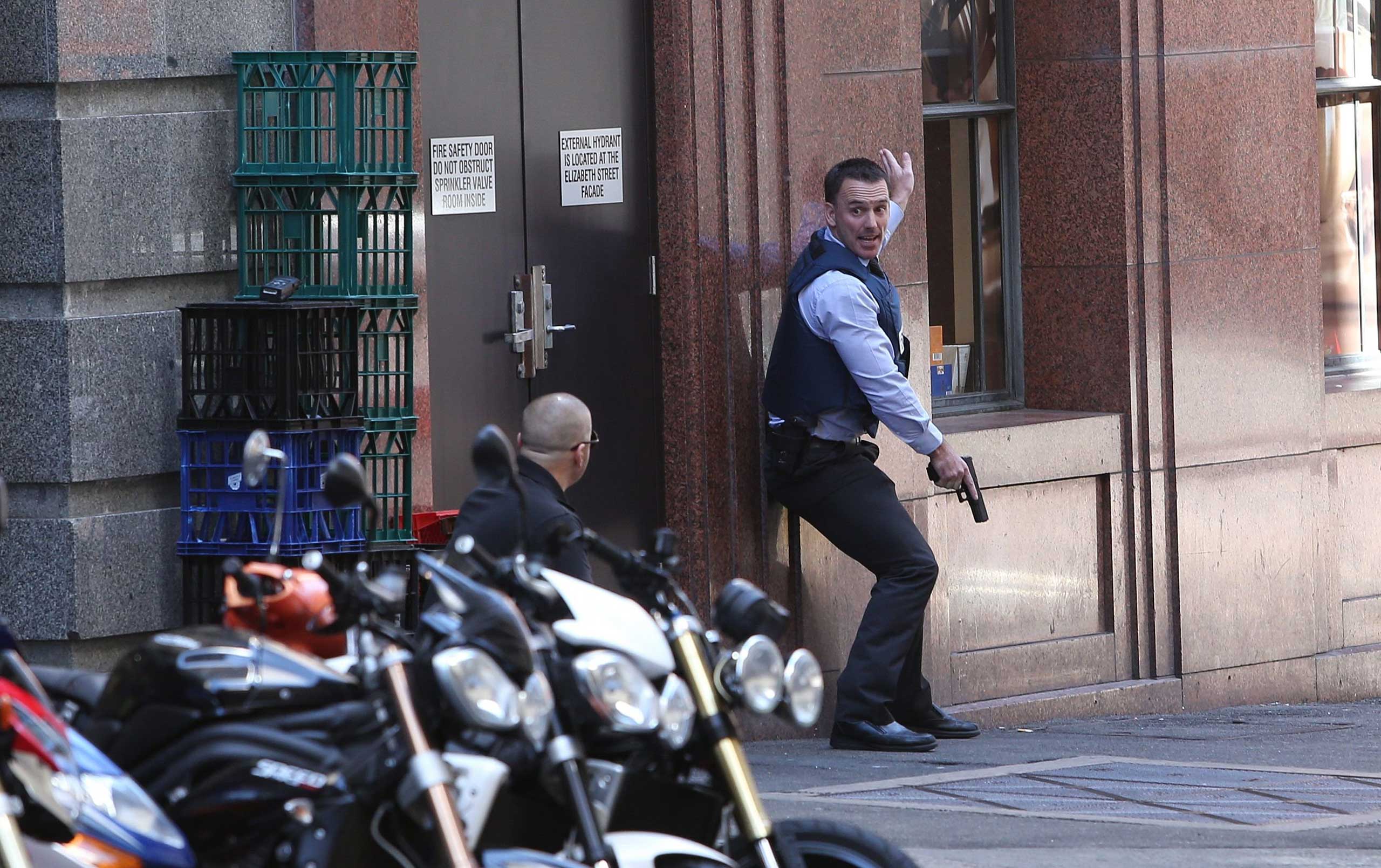 Heavily armed specialist police officers during a siege at Martin Place in the CBD while hostages are held at gunpoint at the Lindt cafe in Sydney, Dec. 15, 2014.
Richard Dobson/Newspix/Rex USA 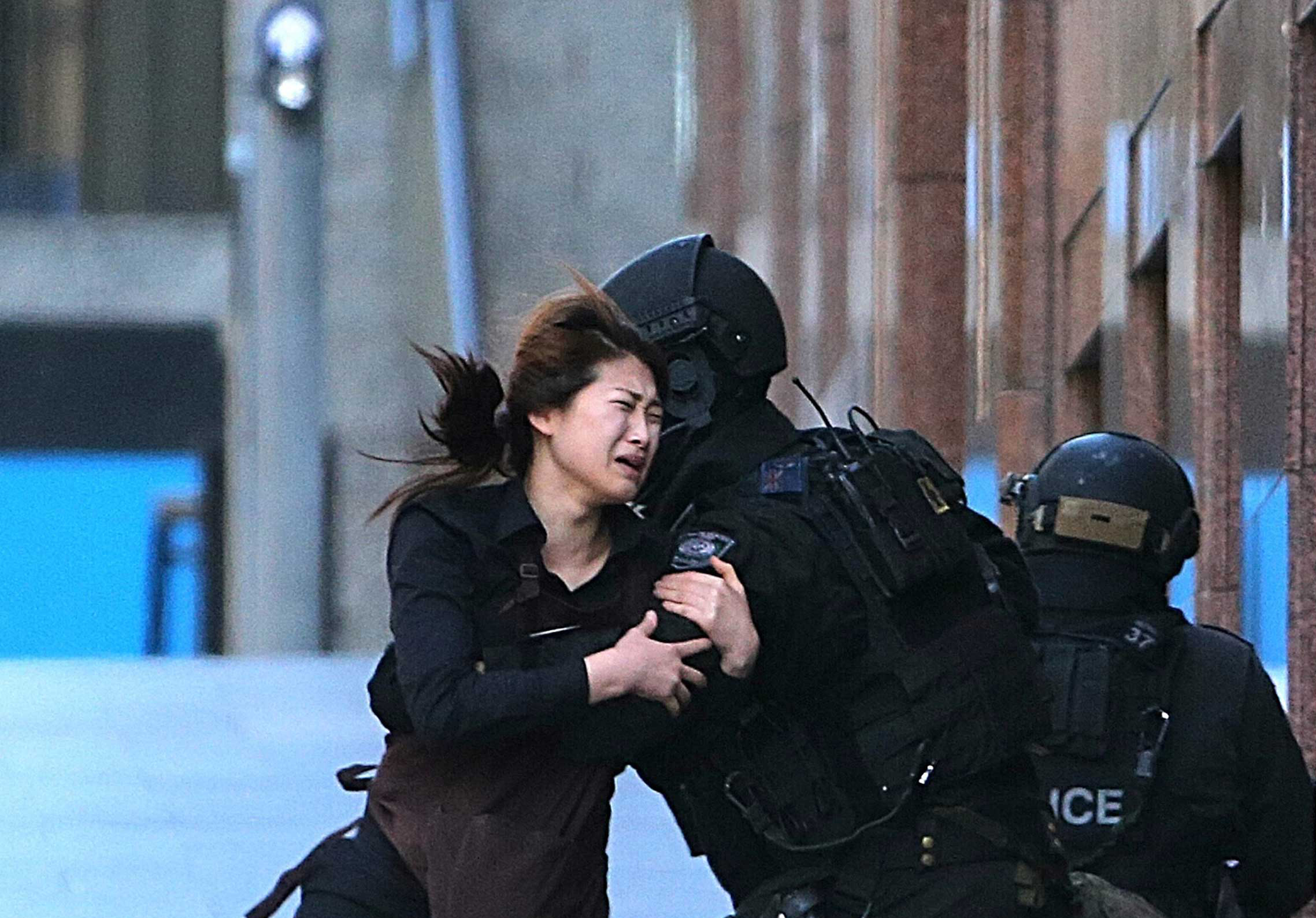 A hostage runs to armed tactical response police officers for safety after she escaped from a cafe under siege at Martin Place in the central business district of Sydney, Dec. 15, 2014.
Rob Griffith—AP 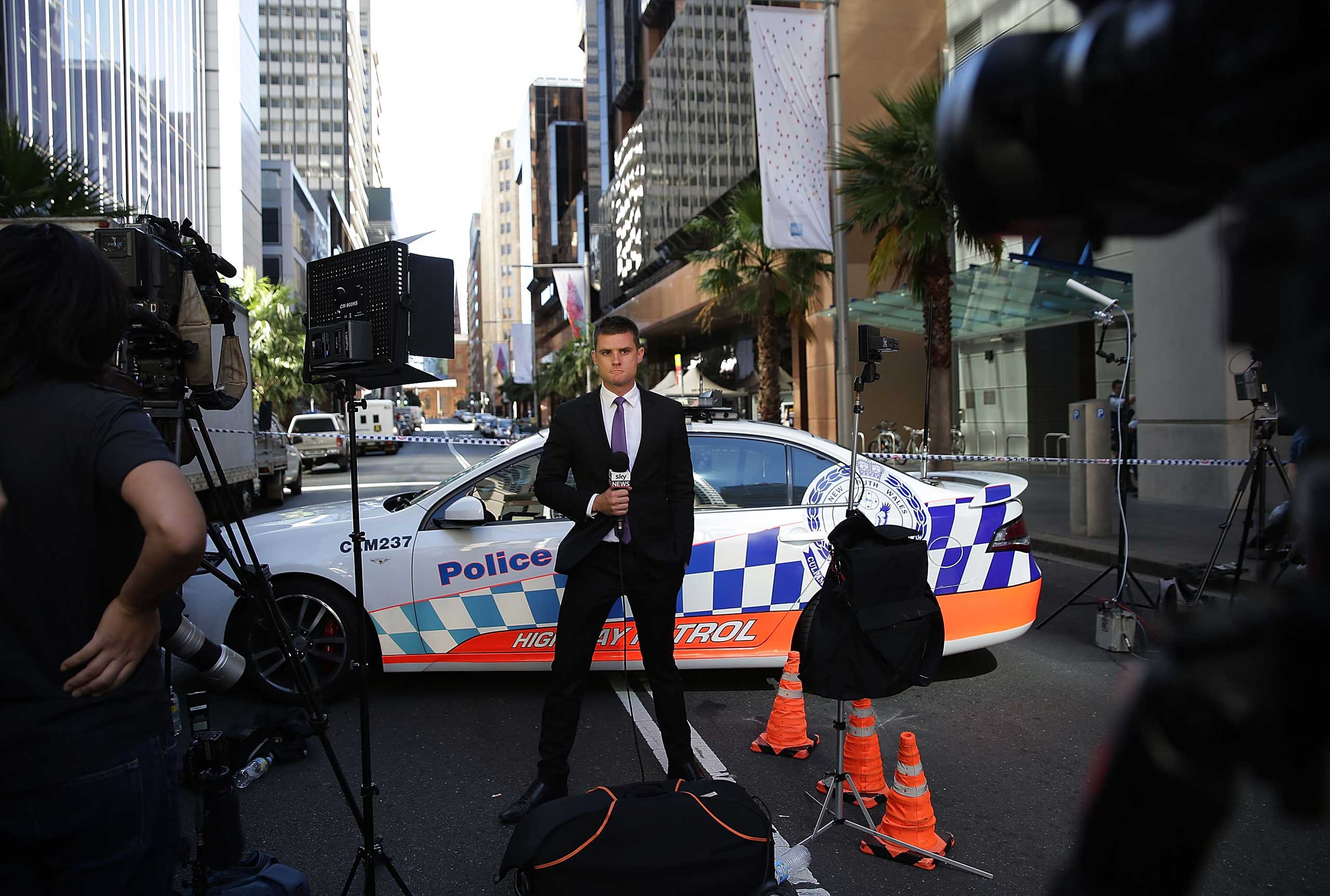 A TV presenter does a live cross from Phillip St on Dec. 15, 2014 in Sydney.
Mark Metcalfe—Getty Images 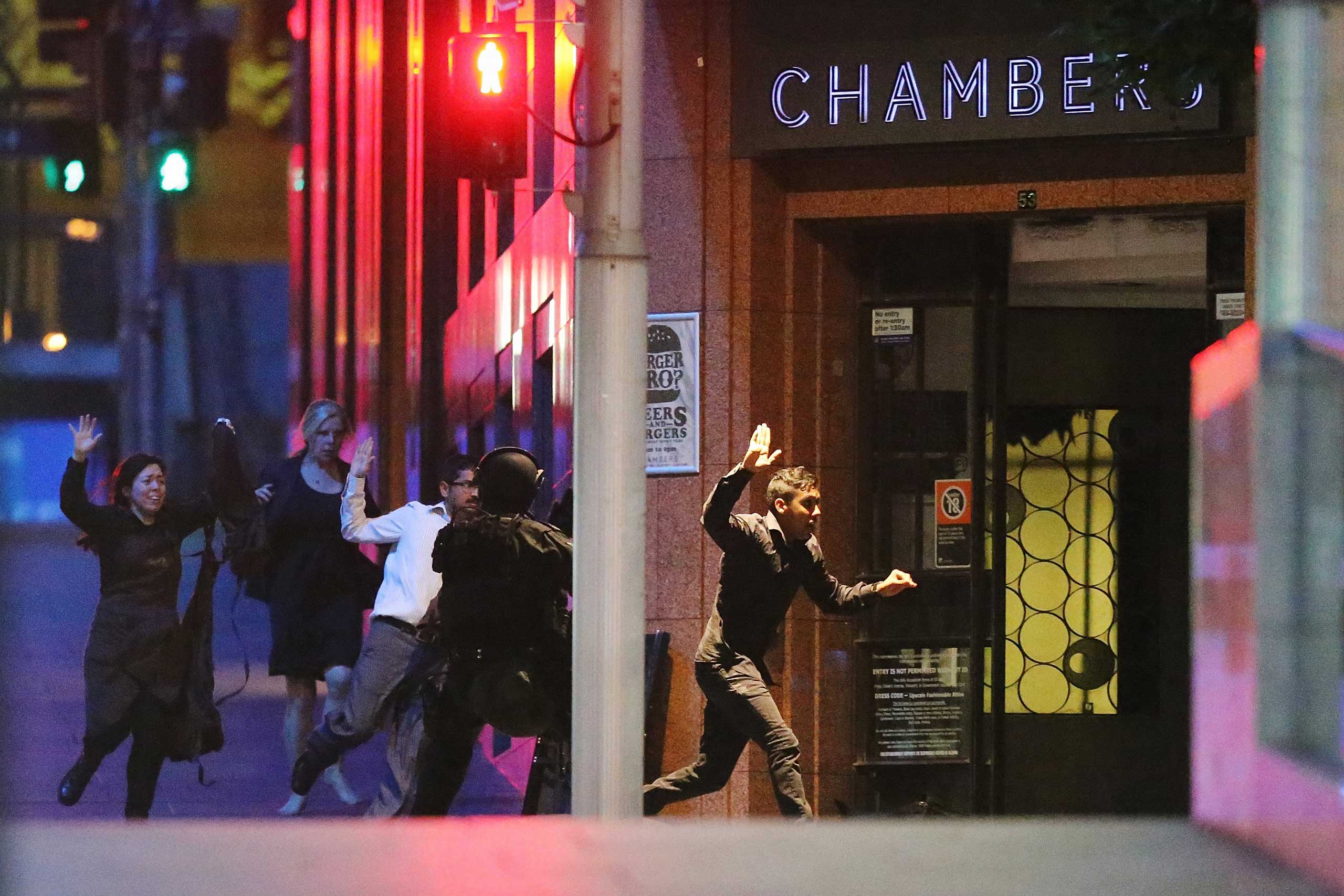 People run with their hands up from the Lindt Cafe, Martin Place during a hostage standoff on Dec. 15, 2014 in Sydney.
Joosep Martinson—Getty Images 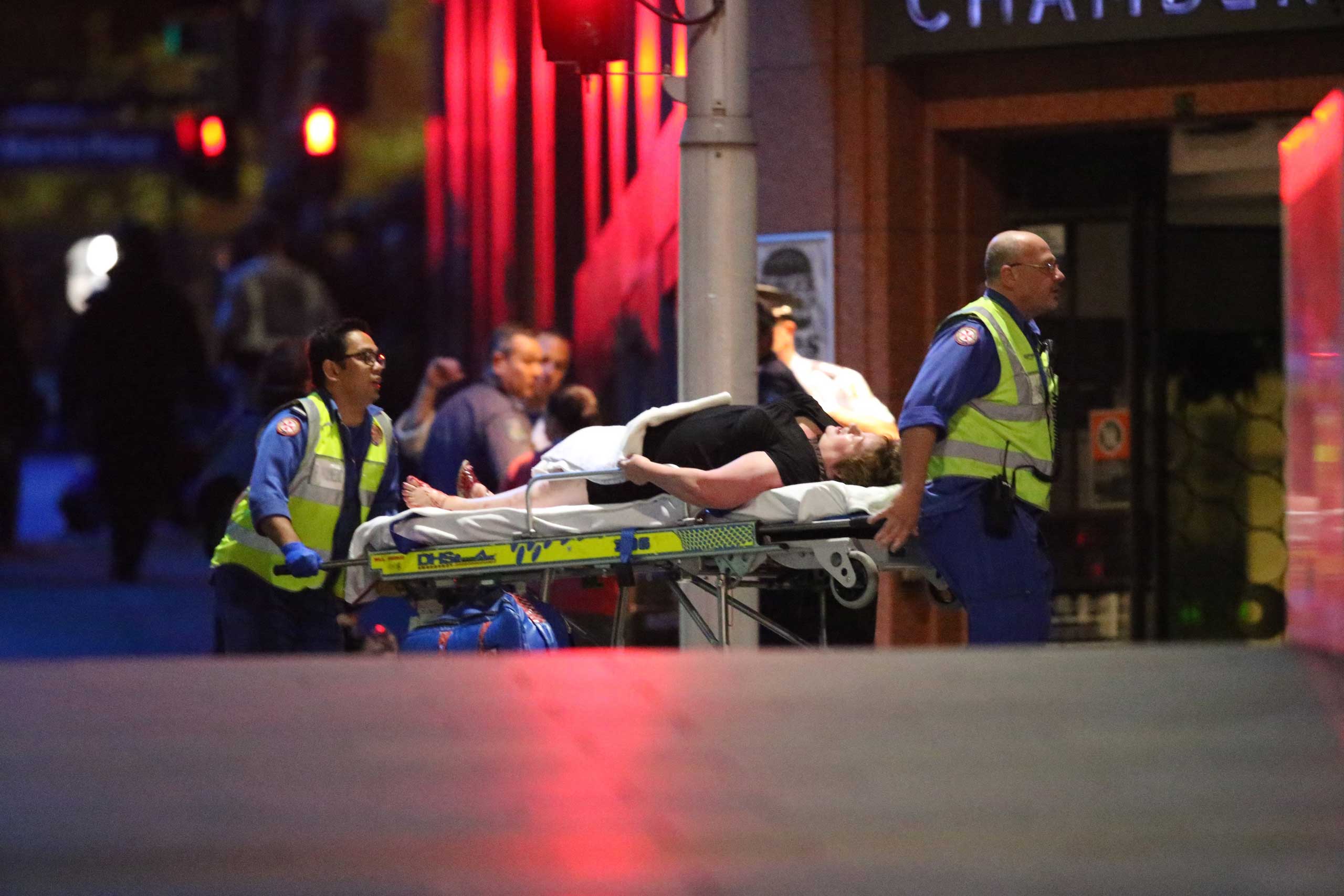 A injured hostage is wheeled to an ambulance after shots were fired during a cafe siege at Martin Place in the central business district of Sydney, Dec. 16, 2014.
Rob Griffith—AP
1 of 6
Advertisement

IDEAS
TIME Ideas hosts the world's leading voices, providing commentary on events in news, society, and culture. We welcome outside contributions. Opinions expressed do not necessarily reflect the views of TIME editors.