ISIS Casts a Shadow Over the Sydney Hostage Crisis, Connected or Not

A bouquet is pictured under police tape near the cordoned-off scene of a hostage taking at Martin Place after it ended, early on Dec. 16, 2014.
Jason Reed—Reuters
By Karl Vick

On Sept. 3, two weeks and one day after James Foley was beheaded by the Islamic State in Iraq and Greater Syria (ISIS), the U.S. official in charge of preventing terrorist attacks against the homeland said he saw no evidence of a threat to the U.S. from ISIS. That apparently remains the case today, even after the horror of the siege in Sydney, where in the course of the 16 hours he held the Lindt cafe hostage, the self-declared sheikh named Man Haron Monis sent out for the black flag associated with ISIS; he had not brought one of his own. All preliminary indications are that Monis, who reportedly died in the hail of automatic weapons fire that ended drama, was acting on his own, a lone wolf like Michael Zehaf-Bibeau, who shot up the Canadian parliament building in Ottawa Oct. 22 or Mehdi Nemmouche, the veteran of Syrian fighting who killed four people at a Jewish museum in Brussels May 24.

For all the fear ISIS inspires, one-off, lone wolf attacks are all the group seems to have attempted to do in the West—and not even by its own hand. ISIS essentially publishes its version of a feel-good bumper sticker: Practice Random Attacks and Senseless Acts of Terror. “If you can kill a disbelieving American or European – especially the spiteful and filthy French – or an Australian, or a Canadian, or any other disbeliever from the disbelievers waging war, including the citizens of the countries that entered into a coalition against the Islamic State, then rely upon Allah, and kill him in any manner or way, however it may be,” the ISIS spokesman Abu Mohammed al Adnani urged Sept. 22, after the Obama administration announced an air campaign aimed at destroying the group before it destroyed Iraq. “Smash his head with a rock, or slaughter him with a knife, or run him over with your car, or throw him down from a high place, or choke him, or poison him.”

Ugly and unpleasant, but a long way from 9/11. But then ISIS long has defined itself by not being al Qaeda. Formidable as the group may have proved itself in military terms, gobbling up large swaths of Syria and Iraq, that’s what a fighting force does in a war, and the war ISIS is fighting is very much located in the Middle East. It’s a war to establish its vision of Islam—extreme, yes, but sectarian above all. ISIS is Sunni, and in Syria it attacks the regime of President Bashar Assad, a member of the Alawite sect that Sunni extremists regard as apostates. In Iraq, ISIS made its gains against a Baghdad government that under then-prime minister Nour al-Malaki defined the state as Shi’ite, also deemed heretical by ISIS. Both governments are backed by Iran, the world’s only Shi’ite theocracy.

The largely Christian West simply does not figure so prominently, which is why al Qaeda has parted ways with ISIS. In 2o05, when bin Laden was still alive, his deputy Ayman al-Zawahiri wrote from his hideout in Afghanistan or Pakistan to Abu Musab al-Zarqawi, the jihadist who headed the Iraq al-Qaeda branch that would become ISIS. “Many of your Muslim admirers amongst the common folk are wondering about your attacks on the Shia,” wrote al-Zawahiri, who now heads al Qaeda. “And can the mujahedeen kill all of the Shia in Iraq?” The answer, delivered in gruesome video post after gruesome video post, is that they sure are giving it a try.

Monis was born in Iran as a Shia and reportedly converted to the Sunni tradition. But it’s unclear whether he was fired by a convert’s zeal. His Twitter account mentioned ISIS, and in generally positive terms, but more as a bystander than as a fanboy, the name for social media mavens who cheer on the Sunni extremist group online. “He’s posted things saying, ‘Oh my God, some people are saying the Islamic State is doing well,'” says Laith Alkhouri, research director for Flashpoint Partners, a private security consultant that made a copy of Monis’ Twitter account before it was taken down. “Even though he was pretty active on social media, he was trying to bring attention to what he saw as injustice to Muslims in Australian,” Alkouri tells TIME. “But he didn’t seem quite bloodthirsty like the ISIS guys.”

What he seemed, in fact, was the kind of figure who showed up in the news cycle long before anyone had heard of either al Qaeda or ISIS. Monis had written tasteless letters to the families of fallen Australian soldiers, but politics appeared to have gotten bound up with his quite personal complaints against the state. Australian news channels produced footage of him standing on a busy street corner in clerical garb and turban, wearing chains on his wrists and holding aloft a sign complaining he had been tortured in prison. His legal woes included charges for indecent exposure, and of involvement as an accessory in the murder by stabbing and fire of his ex-wife. In a Monday interview with Australian Broadcasting, Monis’ former lawyer called him a “damaged-goods individual” who had reached a breaking point.

Absent the frame of Islamist terror, the siege of the Lindt cafe might have looked like one more socially isolated middle-aged man, taking his private torment public at gunpoint. But the frame is indeed Islamist terror; it’s become inescapable. So even after the shooting stopped in Sydney, the number of hostages remains in the billions. 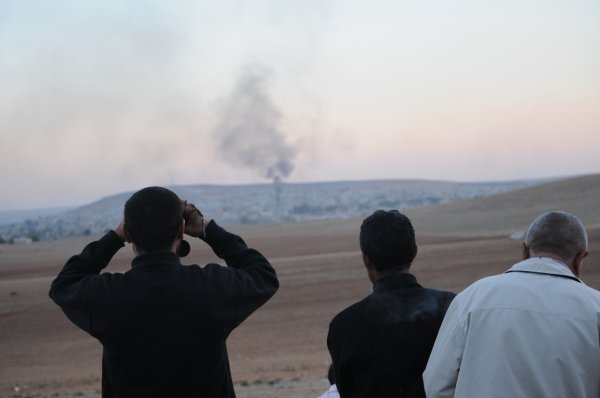 The Fight Against ISIS on the Border Between Turkey and Syria
Next Up: Editor's Pick