NFL running back Adrian Peterson of the Minnesota Vikings addresses the media after pleading "no contest" to a lesser misdemeanor charge of reckless assault Nov. 4, 2014 in Conroe, Texas.
Bob Levey—Getty Images
By Sports Illustrated

The NFL Players Association has filed a lawsuit on behalf of suspended Minnesota Vikings running back Adrian Peterson against the NFL in federal court in Minneapolis, MN, on Monday morning, according to a release from the NFLPA.

The NFLPA’s intention to file suit was reported by Tom Pelissero of USA TODAY Sports on Sunday evening.

The suit is expected to challenge the impartiality of Harold Henderson, who upheld NFL commissioner Roger Goodell’s suspension of Peterson on Friday. Henderson, a former league employee for nearly two decades, called Peterson’s domestic abuse case “arguably one of the most egregious cases of domestic violence” under Goodell’s nine-year tenure as commissioner.

Peterson was suspended for the season in November after he was indicted on felony charges of reckless or negligent injury to a child in September. He pleaded no contest to misdemeanor reckless assault on Nov. 4 after authorities claimed he hit his 4-year-old son with a switch.

Peterson cannot be reinstated before April 15, 2015.

After Henderson’s decision was handed down, the NFLPA responded in a statement:

At the hearing last week, the union argued that Peterson was punished retroactively under Goodell’s changes to the personal conduct policy in August. It also said Peterson was subjected to a “new and obfuscated disciplinary process,” according to USA TODAY.

Henderson rejected those claims in his ruling:

Henderson also echoed Goodell’s claims in a letter to Peterson that the Vikings star failed to “reflect remorse or appreciation for the seriousness of his actions.” 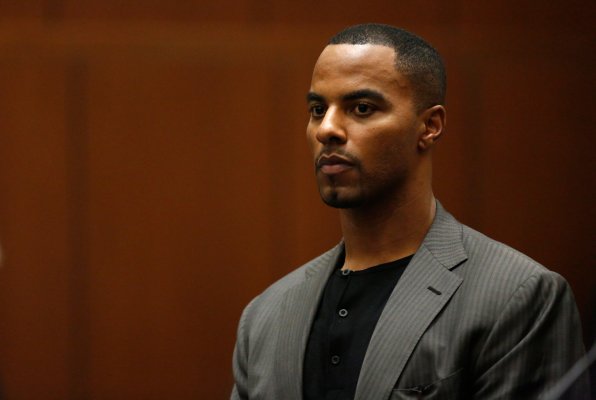 Darren Sharper Indicted on Rape Charges in New Orleans
Next Up: Editor's Pick