Past Acts of Terrorism in Australia or Against Australians

Australian citizens mourn for their compatriots who were victims of the 2002 Bali bomb blasts, in front of the memorial monument, ahead of the tenth anniversary of the incident in Kuta, Bali October 11, 2012.
© Stringer Indonesia / Reuters—REUTERS
By Rishi Iyengar

As Sydney grapples with the Martin Place hostage situation, here’s a recap of terror attacks — and a couple of foiled plots — that Australia and its citizens have been subjected to in the past:

1. Hilton Hotel Bombing, Sydney, February 1978
This incident, said to be the first terrorist attack on Australian soil, killed three people and injured nine others after a 6.5-kg bomb was detonated in a garbage bin. The blast’s purported target was the Sydney Hilton Hotel, where Australian Prime Minister Malcolm Fraser and 11 other state leaders were staying the night before that year’s Commonwealth Heads of Government meeting. But the bombing remains shrouded in mystery over three decades later, according to the Herald Sun. It was initially attributed to Australian fringe religious group Anand Marga, but accused members of the group were subsequently acquitted after being jailed multiple times. Decades later, question marks still remain.

2. Assassination of the Turkish Consul General, Sydney, December 1980
A little under three years later, Turkish Consul General Sarik Ariyak was gunned down, along with a member of his security detail, by two men on motorcycles. Although a group called the Justice Commandos for the Armenian Genocide claimed responsibility for the attack, the perpetrators remained unidentified and no one was charged.

3. Turkish Consulate Bombing, Melbourne, November 1986
This attack was part of a wave of attacks on Turkish citizens and officials worldwide, but the only casualty was one of the bombers belonging to a group called the Armenian Revolutionary Federation. A Sydney resident named Levon Demirian, reportedly the dead man’s accomplice, was jailed following the attack.

4. Israeli Consulate Bombing, Sydney, December 1982
Three people were injured in a blast that rocked the Israeli consulate in mid-December 1982, according to a contemporary New York Times report. A large part of the building was destroyed in what appeared to be part of a series of global attacks on Israeli diplomatic missions. Another Israeli institution, the Hakoah Club, was targeted by a car bomb later the same day. Those culprits were never caught, but Australian authorities reportedly reopened the case two years ago.

5. Bali Bombing, Indonesia, October 2002
Although this attack did not take place on Australian soil, 88 of the 202 victims of the blasts that ripped through two nightclubs in Bali’s party district of Kuta were Australian citizens holidaying in their neighboring country. The Sydney Morning Herald described the attack as “stamping terrorism’s bloody fingerprint on Australia’s door.” The second Bali bombing in 2005 also counted several Australian tourists among its victims.

6. Faheem Khalid Lodhi, Convicted October 2006
Lodhi, a Pakistani-Australian architect, was accused of planning to bomb Australia’s electricity grid in 2003 and was sentenced to 20 years in prison three years later. He was reportedly found to have purchased two maps of the Australian electric-supply system under a false name and also had a handwritten Urdu-language “terror manual.” He was the first person sentenced under Australia’s antiterrorism laws established in 2004 and 2005.

7. Antiterrorism Raid, September 2014
A comprehensive antiterrorism raid was carried out in Australia in September this year, when over 800 members of the Australian Federal Police and the country’s spy agency ASIO swept through 25 addresses across Sydney and Brisbane. The raid resulted in 15 arrests in response to an alleged plot to behead a random member of the Australian public.

Correction: The original photograph accompanying this article did not show the Australian flag as stated in the caption supplied by AFP/Getty Images. The image has been replaced. 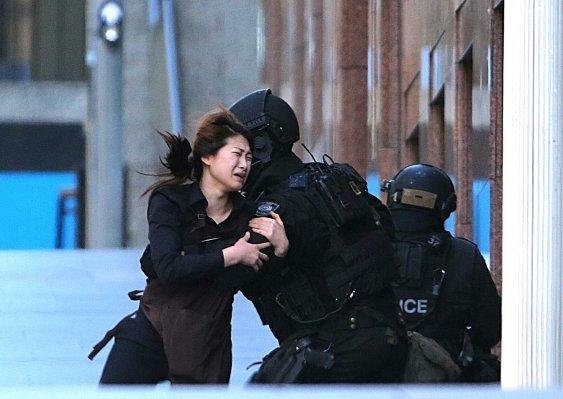 3 Dead in Sydney Siege
Next Up: Editor's Pick