NEW YORK – Oregon wasn’t too concerned with subtlety during the 2001 season. That fall, the school kickstarted quarterback Joey Harrington’s Heisman Trophy campaign with a 10-story billboard plastered nearby Madison Square Garden in New York. The Ducks’ takeover of the Big Apple was the most visible element of Harrington’s campaign for the Heisman Trophy that season. For better or worse, the school’s efforts worked; Harrington escaped the relative anonymity of the Pacific Northwest and reached New York as a finalist, finishing fourth.

Thirteen years later, Marcus Mariota entered the season as another Heisman candidate hailing from Eugene. But how would the Hawaii native have felt about a billboard featuring his face the size of a minivan?

“I wouldn’t have enjoyed that,” Mariota said.

Luckily for the shy Mariota, he didn’t need the extra attention. Oregon’s quarterback did enough on his own this season. On Saturday, Mariota claimed the 80th Heisman Trophy, earning 90.92 percent of possible points, second all-time behind Ohio State‘s Troy Smith. He earned 788 first-place votes, which is the third-most in Heisman history, and he was named on 95.16 percent of ballots. That’s a new Heisman record.

Simply put, Mariota ran all over the Heisman competition.

More than a decade after Harrington’s campaign, Mariota became the first Oregon player inducted into the Heisman fraternity. His victory marked another milestone for the Ducks’ program, one that’s undergone a transformation since Harrington’s campaign 13 seasons ago. But in evolving into one of the country’s power programs, two achievements have eluded Oregon: A Heisman Trophy winner and a national championship. Now Mariota has delivered one to Eugene. Can he deliver another?

The Ducks couldn’t ask for a better star to lead the charge. Mariota compiled a season for the ages this fall. His 53 total touchdowns tied the Heisman record set by 2008 winner Sam Bradford of Oklahoma and finished the regular season as the nation’s leader in passing efficiency (183.6) thanks to a remarkable 38 touchdown passes against only two interceptions. The Pac-12 champions finished 12-1 and secured a Rose Bowl berth where they will play unbeaten Florida State.

The results must sound like a broken record to Ducks fans. Since former coach Mike Bellotti led Oregon to its first 10-win season in 2000 — one year before Harrington’s run to New York — the program has won 146 games, six conference titles and notched 10 double-digit wins seasons. Two other Oregon players, quarterback Dennis Dixon and running back LaMichael James, finished in the top-five of Heisman voting during that span.

Now the program has its first Heisman Trophy. Suddenly, Oregon doesn’t need billboards the size of skyscrapers to get noticed. Mariota is one of the biggest reasons why.

“I think through the continuation of the development of the program in the last decade, and all the thing that come with it — building a national brand, the uniforms, etc. — people are watching [Oregon] now,” Harrington told SI.com. “People have noticed how phenomenal Marcus has been really for three years now.”

The program’s evolution has been palpable to those who have witnessed the progress first-hand.

“Obviously having a Heisman trophy is significant, and having it be the person that it is makes it even more significant. I don’t know how to measure it, but it’s nice to have.”

Mariota has led Oregon to a 35-4 record in those three seasons, but that record isn’t without blemishes. Mariota couldn’t beat Stanford until this season, and the Ducks fell to an unranked Arizona team late in 2013. Entering this fall, Oregon’s decade-plus of dominance was still without a championship trophy in its Nike-infused football complex. Mariota, one of the most prolific quarterbacks in Pac-12 history, likely had one final shot at Heisman glory in 2014.

But history threatened to repeat itself this past October, when Oregon again fell to an unranked Arizona squad, 31-24, on a Thursday night. Mariota’s decision to spurn the NFL for another season in Eugene appeared destined for more disappointment.

“I think that was definitely a part of his thought process when he was thinking about coming back, ending on the right note,” Oregon coach Mark Helfrich said. “Whether it was losing to Stanford or losing to Arizona last year, just righting that in his mind. I think that played a part. I think it also played a part in helping his teammates to do that.”

Instead of wilting, the Ducks won eight straight games after losing to the Wildcats. But they need two more to earn the championship that has eluded them for so long. That task starts Jan. 1 in Pasadena against the Seminoles and last season’s Heisman winner, quarterback Jameis Winston. With a win, Oregon will play for a national championship for the first time since 2010.

That’s the goal for Mariota and the Ducks going forward. Asked on Saturday to reflect on the Heisman’s significance for the Oregon program, the quarterback said he’d trade the trophy in a second if it meant bringing a championship to Eugene. Mariota still has a chance to do that for the first time as a starter. That’ll be Oregon’s ultimate sign of success, as wins are no longer the benchmark for the program. The Ducks finally need a championship to complete their growth.

If Mariota plays his game, he’ll fill Oregon’s trophy case with a Heisman and a national title in the same season. That’s why he’s counting down the days until he can hit the field again.

“Honestly, I’m looking forward to it,” Mariota said.” These last couple days have been hectic, but it’s been so much fun. I’m just looking forward to getting back on the field. We do have a team goal. That’s the biggest concern.” 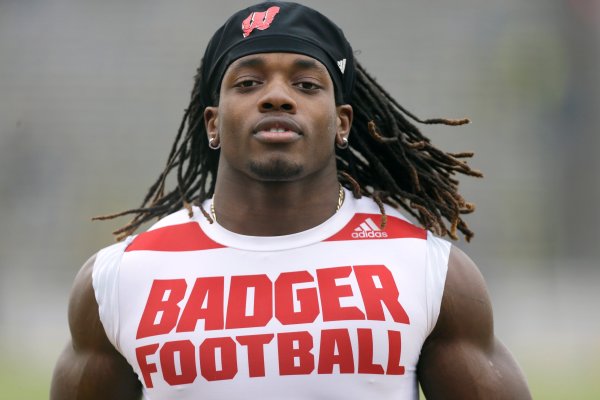