By Denver Nicks and Charlotte Alter

Demonstrators numbering in the tens of thousands marched on the National Mall in Washington, D.C. and in New York City on Saturday, as well as other cities across the U.S., to protest the killings of unarmed black men by police officers.

In the nation’s capital, the families of black men killed by police, including relatives of Staten Island resident Eric Garner, Ferguson, Mo. teenager Michael Brown, and Cleveland, Ohio 12-year-0ld Tamir Rice and others, joined civil rights groups and other demonstrators at the Justice For All march. The marchers called for an end to police killings and for law enforcement who kill unarmed citizens to be held to account for their actions.

In New York City, protestors held signs featuring the words “I am Eric Garner” and chanted what has become a rallying cry of the movement to end police killings of unarmed black men: “Hands up/Don’t shoot.” Andre Irving, 31 and black, attended the rally with his father Mark Irving, 57. “I’m worried for my safety, the safety of my family, my friends, my neighbors,” he told TIME. “Can I go to the store and walk home without being killed?”

Eva Osborne, 8, wore a pin featuring the words “I can’t breathe,” some of the last words Eric Garner spoke before he dies in a video of his arrest, and a phrase that has also been used as a rallying call. “I have a black brother and a black dad,” she said. Her brother is five, her father 43, the same age as Eric Garner. “When my brother grows up, he might be treated the same way.”

The protests mark a new level of civil action in weeks of sometimes violent unrest around the country, as citizens erupted in mass outrage after no charges were brought against police officers responsible for killing Brown, an unarmed teenager shot by police in Ferguson, and Garner, an unarmed Staten Island man who died after being aggressively subdued by police during his arrest for illegally selling cigarettes on the street.

The Justice For All march in Washington was spearheaded by the National Action Network led by Al Sharpton. Some demonstrators, expressing disdain at those they considered celebrity protestors, disrupted the proceedings at a pre-march rally, The Washington Post reports. 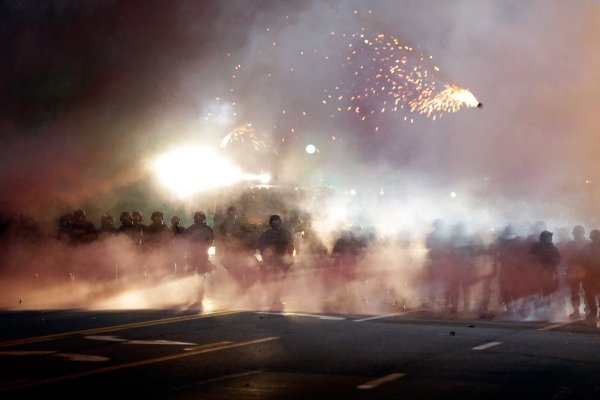 Judge Curbs Police Use of Tear Gas in Ferguson Protests
Next Up: Editor's Pick