Tornadoes at a Record, Unexplained Low in U.S.

A pair of tornadoes barrel toward Pilger, Neb., on June 16. The twisters uprooted trees and flattened houses across the tiny village (pop. 352). Two residents, including a 5-year-old girl, died as a result of the storm.
Eric Anderson—AP
By Denver Nicks

The United States has seen a major lull in the number of tornadoes to strike in each of the past three years, fewer than any three-year period since accurate record-keeping commenced in the 1950s.

Tornadoes are rated EF-0, weakest, to EF-5, the strongest.

In an average year the U.S. sees roughly 500 tornadoes rated EF-1 or stronger. According to data from the Storm Prediction Center reported by USA Today, so far this year the country has seen just 348 EF-1 tornadoes. In 2012 there were 364 EF-1 or stronger tornadoes and 404 tornadoes of that strength or greater in 2013.

Scientists say there’s no consistent reason year to year for this stretch of calm but point to a similarly calm period in the 1980s.

Despite the decline in the number of tornadoes, deaths from the storms remain roughly around the annual average of 60 year on year—many fewer than the unusually high number of deaths from tornadoes in 2011: 553. 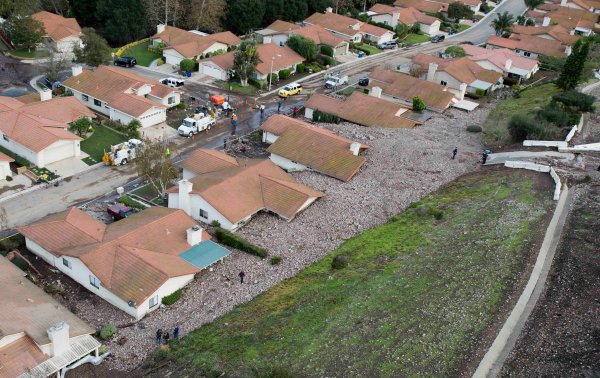 'Pineapple Express' Brings Tornado to L.A.
Next Up: Editor's Pick