This Is the Best Tablet You Can Buy Right Now

The new iPad Air 2 is the best overall tablet for most people. Apple’s new iPads are always better than last year’s, and the things that have made all the iPads strong tablets — like unbeatable app choices — are still present in this generation of the tablet. But with the latest update, the iPad Air 2 is thinner, lighter, and faster than the previous version, plus it gained fingerprint identification features, making it an even better user experience. And right now, the iPad (and iOS ecosystem) still offer the best overall customer experience when compared against Android.

Who Should Buy This?

If you bought the 2013 Air and are a heavy user and content-creator, the faster processor and expanded RAM of the iPad Air 2 will help with performance. If you bought the Air and use it for email, web browsing, and lighter tasks, you can hold off. If you have the original iPad Mini, then the Air 2 will be barely larger, but much faster with better Wi-Fi and Apple’s fingerprint authentication feature, TouchID.

The 2014 update has hardware that makes it faster, thinner, and more versatile than last year’s model or the new iPad mini 3. The iPad Air now has fingerprint authentication, and is thin and light enough to hold one-handed as you would a paperback. It has the best selection of tablet-dedicated apps thanks to iOS. If you’re not particularly into Android or tinkering with your setup, there isn’t a better choice.

Why the iPad Air 2 over the updated iPad mini 3? The iPad Air 2 has a higher-quality camera that can do panoramas and burst mode, and it has the 802.11ac Wi-Fi standard which allows for faster file transfers and improved range. The iPad mini 3 did not receive the faster processor that was added to the iPad Air 2. For $100 more, you get a lot more features, faster overall performance, and a larger, nicer screen with the Air 2.

But what about other, non-Apple tablets? For service and support, it’s difficult to beat Apple today. Their Apple Stores and Genius Bars are equipped to handle almost all tablet repairs on the same day. Our own experiences with the Genius Bar have seen my iPhone screen and a MacBook Air battery replaced within 30 minutes. Other companies might have as long a warranty, but they cannot do the instant turnaround that Apple can.

Most importantly, though, is Apple’s iOS ecosystem. Though the Android (Google Play) ecosystem is catching up, Apple continues to offer the largest selection of high-quality, dedicated tablet apps. While the selection of tablet-designed apps is constantly growing, that ecosystem and extremely clean user experience is still behind what iOS offers to its users.

Flaws (but not dealbreakers)

The iPad Air 2 is more expensive than its closest competition. The closest non-iPad competition is probably the $400 16GB Nexus 9. The iPad Air 2 starts at $500 for the Wi-Fi 16GB version, but 16GB is barely enough for most people and makes installing updates harder down the road, so you should probably get the the 64GB version at $600. Siri is still not as good as some Android voice control systems, and Google Now (which gives you an overview of your day and things you care about) is great if you use Android. But these are just nits to pick.

The iPad Air 2 is the best tablet because choosing it means you’re not compromising on anything. The hardware is fast, thin, and light, it has a great, upgraded camera with useful video capabilities, TouchID, and the best tablet software ecosystem on the market today.

This guide may have been updated. To see the current recommendation please go to The Wirecutter.com 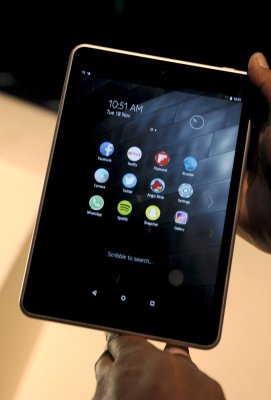 Nokia’s New Tablet Looks Exactly Like an iPad Mini
Next Up: Editor's Pick