In the offices of Mikhail Gorbachev, still sharp at 83 and plainspoken as ever, the walls are lined with photos from his travels as the leader of the Soviet Union and, in the years after its demise, as a living icon of the Cold War. One picture shows him with his late wife Raisa standing arm-in-arm with Mickey Mouse and Minnie Mouse. In another frame he wears a cowboy hat and jeans as he stands beside Ronald Reagan, the U.S. President who famously branded Gorbachev’s country an “evil empire” in 1983. These portraits, like many others in his Moscow office, betray Gorbachev’s affection for his former American adversaries.

But in the course of this year those feelings seem to have been subsumed in a rising sense of animosity, as Russia and the West enter what Gorbachev calls a new Cold War. “Are we in the middle of a new Cold War? Indeed we are,” he tells TIME in an interview last month at the Moscow branch of the Gorbachev Foundation, the international advocacy group he founded in 1991, when he was forced to resign from his post as President due to the dissolution of the Soviet Union.

The elder statesman, who was named TIME’s Person of the Year in 1987 and ‘Man of the Decade’ two years later, is not the first to declare the start of a new Cold War this year. Russia’s annexation of Crimea in March has caused officials and pundits around the world to warn that the West’s efforts to isolate Russia have opened a dangerous gulf between them. But the roots of the present standoff run deeper than this spring, says Gorbachev, and the blame for it lies with the Americans.

In the years that followed the Soviet collapse, the West “tried to turn us into some kind of backwater, a province,” he says. “Our nation could not let that pass. It’s not just about pride. It’s about a situation where people speak to you however they want, impose limitations, and so on. It’s America calling the shots in everything!”

For a country whose leaders remember the years when Russia was a superpower, the American dominance of global affairs has always been a taunting reality and a constant source of frustration. Instead of treating Russia as an equal partner, the West tried to “push us out of politics,” says Gorbachev, most recently during the revolution that brought a pro-Western government to power in Ukraine early this year. Vladimir Putin’s reaction to that uprising sought to claw back some of the influence Russia had lost, and for that the Russian President has earned Gorbachev’s admiration.

“Putin started acting on his own,” says Gorbachev, referring to the annexation of Crimea from Ukraine. “And his position was in the interests of the majority.”

Even a year ago such praise would have been hard to imagine coming from Putin’s Soviet predecessor. In the spring of 2013, Gorbachev attacked Putin for persecuting opposition activists and silencing dissent. He called that year’s crackdown an “attack on the rights of citizens” during an interview with the BBC, and gave Putin the following advice: “For goodness sake, you shouldn’t be afraid of your own people…What people want and expect their president to do is to restore an open, direct dialogue with them.”

Such criticism has since vanished from Gorbachev’s public remarks, much as it has from the rhetoric of many of Putin’s former critics. The annexation of Crimea sent the President’s approval ratings soaring to record highs of well over 80% this year, driven upward by a jingoistic sense of pride even as Western sanctions eat into the value of the Russian currency and push its economy toward recession. Gorbachev now seems willing to forgive Putin for his authoritarian tendencies as long as he works to restore the “great power” status that Russia lost.

“There are still elements of autocracy, of authoritarianism” in Russia today, he tells TIME. “But I’ll say this. The manual control of authoritarianism was also needed to overcome the situation that our friends, our former friends and allies, created for Russia by pushing us out of geopolitics.”

The new East-West divide does evoke a sense of foreboding in Gorbachev. In particular Putin’s recent warnings that Russia is a “nuclear power,” and that foreigners would be wise “not to mess with us,” all feel like reminders of the arms race that kept the world on the edge of a catastrophic war as Gorbachev climbed the ladder of the Soviet Communist Party to become its last General Secretary. “People are talking again not only about a new Cold War but a hot one,” he says. “It’s as if a time of great troubles has arrived. The world is roiling.”

But that does not mean that Putin should back down in the face of Western sanctions. The man who pursued reforms at home and peace talks with the West in the late 1980s now feels it must be the Americans who learn a sense of humility toward Russia and stop resisting its rightful role as a global power. “It’s hard to belittle the Russians,” says Gorbachev. “We know our worth.” And if the U.S. does start to seek a new thaw in relations with Russia, he has a fresh bit of advice to offer Putin going forward: “I learned that you can listen to the Americans, but you cannot trust them,” he says. “When they get an idea to do something, they’ll turn the world onto a different axis to get it done.”

Still, as our interview winds down, Gorbachev seems to snap back into the mode of reconciliation that won him the Nobel Peace Prize a quarter century ago. “We have to return to dialogue. We have to stop this process,” he says warily. “We have to return to what we started with at the end of the Cold War.” But so far, he admits, the world is moving in the opposite direction.

Read next: Exclusive: Putin Cut Ukraine Criticism From Speech Ahead of Peace Talks 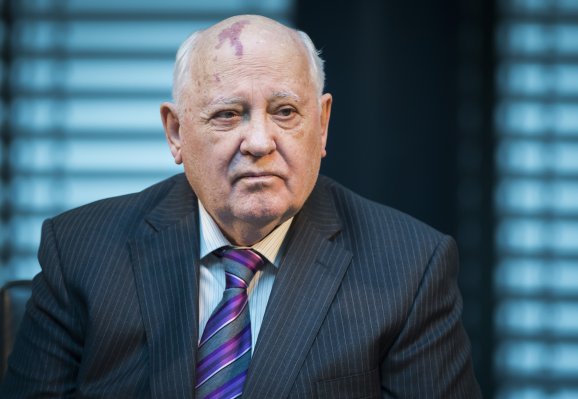