Prince William, Duke of Cambridge, holds Prince George as they board a Royal Australian Airforce Jet heading to Sydney at an airport in Wellington, New Zealand, April 16, 2014. The Duke and Duchess of Cambridge will be in Australia until April 25, 2014.
Mark Coote—EPA
By People / Simon Perry

Will Prince George be getting some new apps from Santa Claus?

His father, Prince William, revealed during the royal couple’s trip to New York City that the little prince is already tapping out commands on an iPad – something his parents believe is helping him on his way to understanding electronics.

William spoke at the Innovation is GREAT reception at the Shutterstock office on the 21st floor of the Empire State Building Tuesday, where he handed out tech awards alongside N.Y.C. mayor Bill de Blasio.

There, William met Ayah Bdeir, the CEO of littleBits, a company that manufactures electronic modules and magnets that snap together, allowing children to build systems and circuits and make their own electronic creations.

Bdeir said that William – who last month paired with Angry Birds to help highlight wildlife crime to younger, online-savvy consumers – “had so much fun” at her exhibit.

“He told me that his son George has been playing iPad games and loves them, and that this was a good way to teach him the inner workings of electronics,” she said.

At the Empire State Building event, De Blasio welcomed William to the Big Apple and apologized for the horrible weather that brought plenty of rain and low temperatures. The mayor said New Yorkers were sometimes “hard to impress and a little jaded,” but he was overwhelmed by the “warm reception” received by Will and Kate, who earlier had visited the 9/11 memorial and museum.

“The warmth and energy make me proud of my city,” De Blasio said. 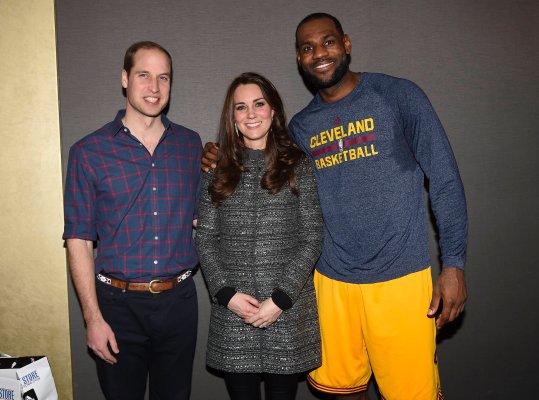 LeBron Kind of Broke Royal Protocol With Kate
Next Up: Editor's Pick