“Second, on multiple occasions, we asked the proper law enforcement authorities to share with us all relevant information, including any video of the incident. Those requests were made to different law enforcement entities, including the New Jersey State Police, the Atlantic City Police Department, the Atlantic County Police Department and the Atlantic County Solicitor’s Office. The requests were first made in February following the incident, and were again made following Mr. Rice’s entry into the pre-trial diversion program. None of the law enforcement entities we approached was permitted to provide any video or other investigatory material to us. As is customary in disciplinary cases, the suspension imposed on Mr. Rice in July was based on the information available to us at that time.”

NFL Commissioner Roger Goodell wrote this paragraph in a Sept. 10 memo to NFL owners and team presidents, which explained his investigative process in the Ray Rice incident. Two days earlier, TMZ.com published video of Rice knocking out his then-fiancée in an elevator of an Atlantic City casino. Goodell then suspended Rice indefinitely.

These are troubling words, because ESPN reported Wednesday that the transcript of Rice’s appeals healing — a judge lifted his suspension last week — shows that they’re very likely not true. According ESPN, the NFL’s lead investigator into the Rice incident told the league’s head of security, in an email, that “again, I never spoke to anyone at the casino or the police department about the tape.” At the end of the email chain, he wrote, “I never contacted anyone about the tape.”

The takeaways seem pretty clear: Either Goodell was frighteningly incompetent here, or he distorted the truth in that memo. For him — or his staff — to sit down and compose a letter saying the NFL asked for the tape, while the head of the Rice investigation is saying the exact opposite, is startling. This wasn’t Goodell misspeaking at a press conference or in an off-the-cuff moment. These words were prepared, and had to be vetted and fact-checked for accuracy.

So was Goodell lying, or is the paragraph just bumbling? Goodell seems to lean toward the latter: In the Rice hearing, when a lawyer informs Goodell of the emails, the commissioner responds: “I wasn’t aware of the fact that they tried to get it from law enforcement.” Really? So amidst the most intense public scrutiny the NFL has ever seen, Goodell sent out a letter to his bosses without asking the head of the Rice investigation if it was indeed accurate? Or did the head of the Rice investigation, Jim Buckley, and the recipient of the email, NFL chief security officer Jeffrey B. Miller, not tell Goodell that Miller hadn’t asked for the tape? Or did the NFL fudge the truth to seem like it had followed basic investigative protocol?

No matter what, it’s a head-scratching mess. This exchange is not unrelated to the NFL’s announcement earlier on Wednesday that an investigator, not Goodell, would be in charge of initial disciplinary proceedings under the league’s revamped personal conduct policy. (Though Goodell can remain involved in the appeals process). At the very least, Goodell clearly needs to get out of the judge and jury role. The owners have stuck by him through this crisis. How long will their patience last? 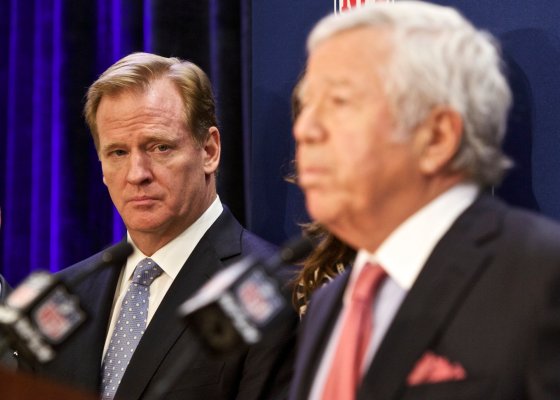