Review: Still Alice: Julianne Moore Reveals Alzheimer's From the Inside

Alice Howland (Julianne Moore) should be a whiz at Words With Friends: she’s a linguistics professor at Columbia University. But lately words have become her enemies. Finding the right one is occasionally as enormous a challenge as climbing to the top of… that mountain in Asia whose name she also has trouble summoning.

Alice’s poise and wit, her near-perfection, have long been taken for granted by all who know her, not least herself. So she immediately recognizes the warning signs: getting lost as she jogs to her seminar, or stumbling into a black hole in an otherwise familiar sentence. At 50, in the first stages of early-onset Alzheimer’s, she has started to follow the line of decay traced in Billy Collins’ poem “Forgetfulness”: “as if, one by one, the memories you used to harbor / decided to retire to the southern hemisphere of the brain, / to a little fishing village where there are no phones.”

Most movies about Alzheimer’s, like Iris, The Notebook and Away from Her, depict the effect of the disease on the sufferer’s spouses and relatives. Still Alice, which directors Richard Glatzer and Wash Westmoreland have adapted from Lisa Genova’s 2007 novel, sees Alzheimer’s from the inside — an interior drama sliding gracefully. irrevocably toward loss of self. It affords Moore the chance to inhabit a personality that doesn’t grow and learn but tragically diminishes, agonizingly forgets; and the actress seizes that opportunity to create the year’s most impressive, acute and poignant movie portrait.

At first Alice is angry, crying, “I wish I had cancer!”; she could accept it if her body, not her mind, were betraying her. Then she puts a heroic face on her condition: “I’m not suffering, I’m struggling.” But she knows that isn’t true. As a bright person in the process of losing her memory, she can’t help monitoring her disintegration — like the scientist, played by Jeff Goldblum in David Cronenberg’s 1986 The Fly, who tries to study and understand his metamorphosis even as he succumbs to it. The Alice she still is, for the moment, is in advanced mourning for the Alice she will become. Mourning and scheming: on her computer she hides a message of instructions for her later self to discover and use as a killer cure for their disease.

Worst is the indignity: forgetting where the bathroom in her home is, and then why she needed to go there. Her husband John (Alec Baldwin) and their grown children Anna (Kate Bosworth), Tom (Hunter Parrish) and Lydia (Kristen Stewart) want to help, but not to the extent of surrendering their own lives — or, perhaps, defiling their memories of the Alice they’ve loved, who may not still be Alice.

Glatzer and Westmoreland, a married couple who together or separately have written and directed inside-Hollywood movies (Grief, The Fluffer, The Last Robin Hood) drenched in the gay sensibility, play it straight, serious and perceptive here — with an urgency perhaps attributable to Glatzer’s 2011 diagnosis of ALS. (Unable to speak, he communicated during the shoot by tapping on an iPad.) They make selective use of that indie crutch, the plaintive solo piano, and refuse to push the viewer toward snap judgments of characters.

The filmmakers do stint a bit on fleshing out the members of Alice’s family, with John focusing on an appointment to the Mayo Clinic instead of spending precious months with his wife, and only Lydia, their youngest, paying much attention to Alice; she’s Cordelia to her quietly raging Mom Lear. But this isn’t the family’s story; it’s Alice’s. And from her disadvantage point, it may seem that she is estranged from, and forgotten by, all those she relies on.

Alice found the perfect vessel in Moore, who almost always manages to be both fearless and pitch-perfect. Even in extreme roles, like the aging actress fighting for one last great part in Cronenberg’s corrosive movie satire Maps to the Stars (to be released in the U.S. in February), she never showboats or grandstands. In a busy year when she took a flight with Liam Neeson in Non-Stop and played the rebel President in The Hunger Games: Mockingjay Part 1, Moore found a role of her lifetime — a sister of sorts to her character in the 1995 Safe, as the upper-class wife who believes that environmental toxins are robbing her of her personality.

Quietly magnificent, Moore plays Alice the way Pablo Casals played the cello, with delicate power and masterly vibrato. She locates each sad nuance as Alice tries valiantly to hold on to her memory, her bearings, her old cunning, her family, her self. The struggle may be doomed, but she can’t stop fighting. We hate to use the O word but, come Academy Award time, Still Alice should bring this four-time Oscar nominee the honor she has so long and richly deserved, for a performance that is — and Alice might appreciate this — unforgettable. 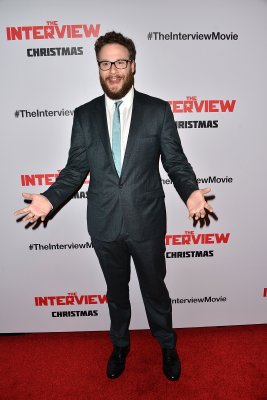 Seth Rogen Thanks Sony Chief for Making The Interview
Next Up: Editor's Pick