This Disaster Happened Because the CIA Outsourced Accountability

The lobby of the CIA Headquarters Building in McLean, Va.
Larry Downing—Reuters
Ideas
By Patrick M. Skinner
Patrick M. Skinner is the Director of Special Projects for The Soufan Group. He is a former CIA Case Officer, with extensive experience in source handling and source networks, specializing in counter-terrorism issues.

It’s terrible for anyone to read the Senate report. The actions detailed are as repulsive as they were ineffective and damaging. As a former CIA case officer, it’s particularly maddening to read the report. Throughout the Senate Intelligence Committee’s report on the CIA’s detention and interrogation program, the reader can see where CIA Headquarters overruled the assessments of its own staff personnel that were at the various “black sites,” conducting—or, more often, witnessing—interrogations done by contractors. At numerous times throughout the interrogations of Abu Zubayda, Abd al-Rahman al-Nashiri, and Ramzi bin al-Shibh, agency officers communicated back to headquarters their assessment that the subject was cooperating or had no more information of value that warranted additional pressure. And virtually every time, headquarters came back with a more definitive assessment that they knew the subject was withholding more vital information.

Where did this certainty come from?

Part of the answer is that it wasn’t CIA personnel actually running the program, even if they were ultimately responsible for it. As noted in the Senate report, the overwhelming majority (80%) of the people directly involved in the disastrous program were contractors, with the initial and primary responsibility resting on two contractors who had zero relevant experience, as well as those in the Agency who vouched for them. While the most shameful details of the report involve the indefensible tactics, another shame is that the Agency—at great effort and expense—hired and trained some of the most capable people in the country to collect needed intelligence; and after the worst terrorist attack in our nation’s history, the agency outsourced one of its most important tasks.

Of course, no CIA personnel had the “relevant experience” in running detention programs because the agency wasn’t, and shouldn’t be, in that business. Once the decision was made for indefinite detention and interrogation, the agency decided to contract out this new mission to people who had even less experience, but who weren’t as bound to the agency code of ethics. This doesn’t excuse the agency from what happened; it actually makes it much more inexcusable, even allowing for the understandable fear and chaos after 9/11.

According to the Senate summary, the contractors responsible for the new torture tactics were also responsible for vetting their own work and then recommending it for other cases. Unsurprisingly, the contractors recommended their own work again and again, over the objections of actual staff employees. It should be stressed again that the tactics used were first designed by our enemies to produce false confessions for propaganda purposes and yet the agency utilized them in an attempt to produce accurate and needed threat information. It wasn’t an accident the tactics proved ineffective; they were intended to force fiction. The most outrageous thing about the contracted program isn’t that the CIA paid two contractors an estimated $81 million to develop what by design was a fraudulent program—one that appealed more to a Hollywood notion of a ticking time bomb than the reality of developing pertinent information through informed careful questioning—but that the Agency believed the fiction.

But another part of the answer is that readers believe they know the characters better than the author. As a CIA case officer later on, I experienced this first hand several times, where an analyst who had only read my reports would then tell me all about the source, whom they have never met. It’s not intentional, and if kept in check it can lead to very good analysis and assessments. But what is apparent again and again in the report is that this was not kept in check, and the readers, who increasingly were contractors, therefore became the actors. Reading highly compartmentalized reports became the currency of the realm, with the results skewed while the actors remained non-Agency personnel by design.

As the understandable pressure increased from policy makers looking for results, the accountability for what was happening decreased, with no one wanting the full picture lest they become responsible. The Senate summary highlights repeated objections by Agency staff—from medical to operations—regarding what was happening in their name. Again, one of the shocking parts of the report is how little senior agency management listened to or trusted its own employees, people who were working non-stop to address the terrorist threat.

At the most critical hour for the agency, the leadership decided to outsource its most important responsibility to unqualified contractors with no experience with the history and culture of the CIA. The results were so disastrous that more than a decade later, the nation is convulsed by what happened and why. When it mattered the most, the nation deserved the CIA’s best, and they got contractors instead.

Patrick M. Skinner is the Director of Special Projects for The Soufan Group. He is a former CIA Case Officer, with extensive experience in source handling and source networks, specializing in counter-terrorism issues. 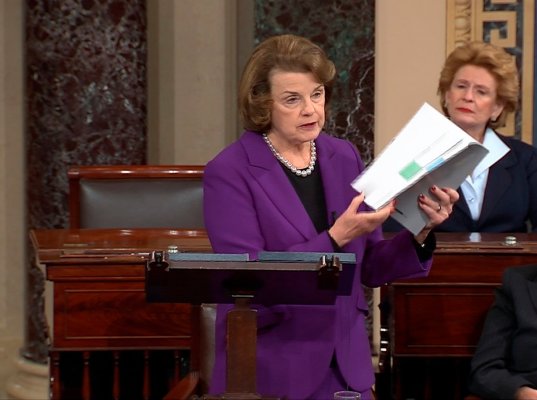 The Feinstein Report Cannot Deny a Clear Record of Success
Next Up: Editor's Pick