The Final Countdown for Hong Kong's Protest Camps Has Begun

The 74-day occupation by pro-democracy protesters of Hong Kong’s Admiralty district — home to the Central Government Offices as well as military headquarters and several high-end office towers — will likely end Thursday, but demonstrators vow that the battle for the city’s political future will continue.

During a press conference on Tuesday afternoon, Hong Kong’s assistant police commissioner Cheung Tak-keung said officers would be accompanying bailiffs on Thursday to clear several intersections in Admiralty in accordance with a court order that went into effect this week. He added that police would remove all remaining barricades and tents, regardless of whether they were located at the intersections that are the subject of the order.

“I hope that the illegal road occupiers [will] leave the area in a peaceful and orderly manner as soon as possible and not resist,” Cheung told reporters.

The euphoria that gripped the encampment at the start of the so-called Umbrella Revolution in September has largely given way to exhaustion and hardened pragmatism. After more than two months of civil disobedience, protesters readily admit that myriad rallies, hunger strikes and the takeover of some of the city’s major thoroughfares have failed to incite a broader uprising. Neither have political concessions been won: the government refused to hold any talks besides an initial meeting with student leaders on Oct. 21 and Beijing has not backed down from its insistence that candidates for Hong Kong’s top political post must be screened by a pro-establishment committee.

However, some say that the mostly student protesters have succeeded in politicizing an entire generation and giving them the courage to defy Beijing instead of seeking accommodation with China as earlier generations have done.

“They successfully made Beijing and the Hong Kong government hear the Hong Kong’s people’s voice,” said Han Dongfang, a labor activist, who was jailed for helping organize the ill-fated democracy rallies in Beijing’s Tiananmen Square 25 years ago. “The next generation is also hearing their own voice.”

On Tuesday afternoon, the thousands of tents at the Admiralty site appeared to be mostly empty, with remaining demonstrators in a reflective mood. “We’ve been fighting for 30 years,” said 21-year-old student activist Michelle. “It’s very likely we’ll have to fight for another 30 years.”

She asked that her full name be withheld, like many young protesters who fear that they will be punished for their political activity by being forbidden to enter mainland China. Such travel bans have already been imposed on protest leaders and they are a sanction that could easily cripple the career prospects of anyone in a city that economically depends on its porous border with the mainland, located just 90 minutes away from the Admiralty camp.

After the occupation ends, one man surnamed Cheung, who has spent the better part of the past two and a half months patrolling Admiralty’s barricades, says he hopes to hold workshops and lectures in parks and at food courts to continue the discussions that first bloomed here.

“Most of the people joining here are between 20 years old and 30 years old,” says Cheung. “In about 10 years, we will be a major force in the society.”

As demonstrators prepared for their inevitable eviction, office workers descended from the district’s glass towers on an unusually sunny December day to eat takeout lunches and enjoy a last quiet stroll through roads that, soon, will be choked with traffic once again.

Gowned university graduates, fresh from their commencement ceremonies, congregated to take final selfies in front of the Lennon Wall — a sweeping expanse of concrete by the legislature that, since the protests began, has become covered with thousands upon thousands of fluorescent Post-it notes inscribed with messages of support from all over the world.

The crowds kept coming into the early hours of Wednesday morning to bid farewell to a tented village that has marked a dramatic turning point in the history of China’s most open city.

Sui Lai, a social-sciences lecturer from Hong Kong Polytechnic University who has spent most nights delivering speeches near Hong Kong’s Legco offices, says the Umbrella Movement will continue with different forms of protest.

“I will continue my teaching forum at the weekends. I may set up some indoor venue to keep teaching [the students] maybe twice a week,” she says.

Two subway stops away, at a smaller protest camp in the shopping district of Causeway Bay, demonstrators thanked their fellow protesters for standing firm and apologized to local business over loud speakers for the inconveniences caused by the occupation.

In preparation for the Thursday’s police action, first-aid worker volunteer Man Law said she had scheduled a day off from her normal job as a product designer so that she can be ready to treat anybody injured during the clearance.

Over the course of the protests, Law estimates that she had provided care to more than 50 people, who had everything from scrapes and bruises to head lacerations caused by police batons strikes. Like many, she plans to channel the enthusiasm of the past 74 days into future action.

“After the protest, we will continue to let the government know what we want,” she says. “This is just the start.”

— With reporting by Helen Regan and Rishi Iyengar / Hong Kong 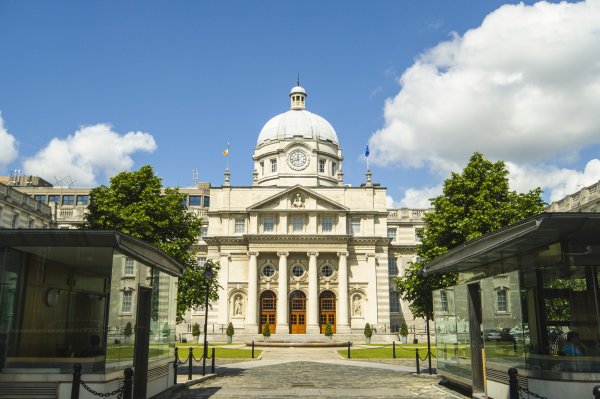 Ireland Looks Set to Recognize a Palestinian State
Next Up: Editor's Pick