Sons of Anarchy Watch: Out With A Bang

The series finale of Sons of Anarchy aired last night and there was just one question on everyone’s minds: Can Kurt Sutter land this thing? Over the last seven seasons, Sutter, the show’s writer, creator and occasional star, has guided fans through murder, mayhem and madness and made us fall in love with a band of rogues. Each season, Sutter more or less delivered with the typical seasons-long mix of nuanced beauty mixed in with some real clunkers, but could he end the series with a graceful bang? Can he give fans a satisfying finale for the haunted antihero Jax Teller?

(Personal theory: Jax leaves Charming in his dust and Sons of Anarchy is just the prequel to Raising Arizona and Jax becomes Leonard Smalls, the motorcycle mercenary for hire, saving babies from kidnappers, with a “Mama Never Loved Me” tattoo on his arm.)

Needless to say, spoiler alert: The following contains many details about the series finale of Sons of Anarchy. Don’t read it if you don’t want to know what happened.

The show opened with Jax (Charlie Hunnam) lying in bed next to his ex-wife and baby mama Wendy (Drea De Matteo). He holds his sons, checks his guns and heads out the door and into battle. First stop: the storage unit where he burns his past, including photos of Bobby Elvis and his father’s writings. Then it’s off to the garage for some light paperwork before swinging past the graveyard on this maudlin victory lap. He stops at Opie’s grave to leave his Sons rings for his fallen best friend before leaving his wedding ring and a kiss on Tara’s tombstone.

At SAMCRO HQ, the club decides to break with long racist tradition and patch in a new member: T.O. (Michael Beach a.k.a. Al Boulet from ER) becomes the first black member of the Sons of Anarchy. It’s a nice box for Sutter and/or Jax to check off on his way out the door.

Wendy is still clueless about the fact that her world is collapsing around her. She is just ready to take the boys to Nero’s farm — which is not a euphemism, but could be. Nero (Jimmy Smits), on some level, knows what happened to Gemma, but wants Jax to confirm it before he can begin to grieve. He can’t even look Wendy in the eye when she asks if he’s heard from Gemma.

The show is filled with scenes of the Sons taking care of business, but it all seems like a moot point, just filling time while Sutter makes sure all his plot points have been resolved before the big denouement. To wit: the Sons meet with Tyler about taking over guns from Marx. Their meeting is interrupted when Connor, the Irish man they were tasked with finding, opens fire on them, giving Sutter one more chase scene to film. It was no French Connection, but there’s no doubt that Sutter had a lot of fun filming the vintage GTO tear through a plastic baby doll warehouse chased by SAMCRO. The scene ends with all four bikes wiping out after a dump truck cuts them off and Connor getting away.

After the chase, the club heads back to HQ, so Jax can have a final man-to-man talk with his VP, Chibs (Tommy Flanagan). Jax reminds Chibs that he flat-out murdered another club president and then lied about it, so the other charters voted to send Jax to “meet Mr. Mayhem,” which is club lingo for death. As Chibs tears up, Jax passes the mantle and the onus of club leadership to him, making Chibs promise to do what he asks, which is still TBD.

Then the complicated Irish subplot continued. This late in the game, does it really matter? Guns, death, gun running, etc. For those who need to know: The Sons shifted their business from the IRA to Connor who is willing to work with gun runners of any color or creed or gang affiliation. The most memorable part of their business dealings came when Jax killed an IRA King. When called on it, he smirked, “My old man tried to sever that tie years ago. Better late than never.”

Back at the garage, Jax is all business. He tells Nero that he is giving the house and business to Wendy to sell. He wants her to take the kids and leave Charming. When Nero tried to play dumb, Jax turned his big blue eyes on him and they had a teary-eye off, telepathically communicating everything. Only actors of their caliber could have made this scene work, because in lesser hands it would have looked like a playground staring contest. With Hunnam and Smits, though, it was all emotion. Jax apologized to Nero, explaining that when it came to Gemma, “I did what I know how to do,” proving that he’s reached the acceptance stage of his grief. Jax made Nero promise that his sons would leave Charming, so they don’t become like him. Jax wants his boys to know the real him — a criminal and a killer. He wants them to hate the thought of him. When Wendy arrived with the boys for the much-discussed farm trip, Nero quickly put on his sunglasses to cover his tears. Jax hugs his sons tight, and said goodbye.

Jax went to make his confession to District Attorney Patterson (CCH Pounder, reprising her role from last season). He thanks her for trying to help Tara and then tells her what really happened to his wife. Jax informed Patterson that Gemma is in Oregon with Unser, which is technically true. Jax then promised that by the end of the day the violence in Oakland and Stockton would be over. When she asks what happens at the end of the day, he shrugs, “The bad guys lose.”

Back at SAMCRO HQ, Chibs does what he promised. He’s fully crying as he votes for Jax to “Meet Mr. Mayhem.” The club joins him voting Jax to his death. Meanwhile, Jax continued to make the most of his last day on earth by killing Charlie Borasky and August Marks in quick order with the help of a magical homeless woman (?) who handed him a grotty blanket and left behind a meal of bread and wine — so much symbolism! We will leave it to Media Studies PhD students to decipher.

In the back of some warehouse, Jax cut the President patch off his cut and gave it to Chibs and Chibs made Tig his VP. All the big burly motorcycle men were crying as Jax nods that he is ready to go. Chibs pulls a gun and aims it at Jax. But instead of shooting his president and friend in the head, he shoots Happy in the arm. They plan to tell everyone that he pulled a gun on them and escaped. Jax hugged everyone close as he made his farewells. Tig gave him the weirdest smile (naturally) and Chibs held on to Jax for a hug and a kiss and some intense eye contact. Then Jax hopped on his father’s bike and rode off, promising his club that he’s “got this.”

As Jax hit the road, the Sheriff put out an APB for him due to the many, many homicides he’s committed that day. Jax goes to talk to the wall where his father died. He wasn’t quite done talking when the Highway Patrol spotted him. He lazily fired off a few warning shots before taking off down the road while the cop gave chase. More and more cops join the chase as Jax headed west. As the road got bumpy, there were a dozen police officers chasing Jax. He smiled when he saw the semi-truck headed towards him.

In a move (over-) wrought with symbolism, Jax threw out his arms in a motorcycle crucifixion, the driver yelled, “Jesus!”, and Jax ran headlong into the truck, which was driven by the man (Michael Chiklis) who drove Gemma to Oregon. As the chase ended and Jax dead, Sutter squeezed in one last piece of religious symbology as a crow flew by, and a meal of bread and wine appeared on the side of the road.

It was a bit of a headscratcher of a finale. It checked off most of the boxes and gave fans not exactly the ending most of us wanted, but one that works for the most part. But in the spectrum of series finales was Sons of Anarchy more Lost or Breaking Bad? Only history (and Twitter) will decide. 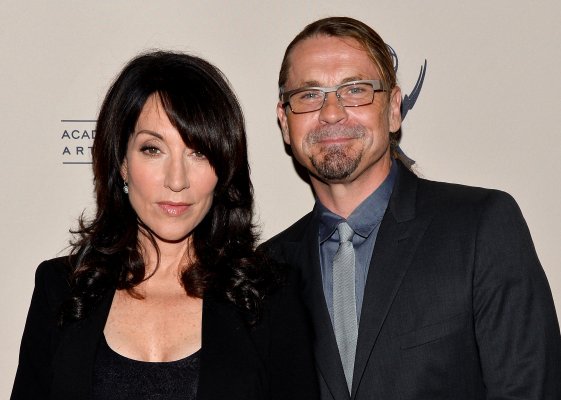