Ways of Seeing: From Stills to Motion

Whether through digital channels, print or on exhibit, the impact, influence and reach of the still image has never been greater. But with so many images fighting for our attention, how do photographers make work that most effectively stands out and connects with an audience. In this seven-part series, TIME looks back over the past 12 months to identify some of the ways of seeing—whether conceptually, aesthetically or through dissemination—that have grabbed our attention and been influential in maintaining photography’s relevance in an ever shifting environment, media landscape, and culture now ruled by images.

From Stills to Motion

The moving image has become a defacto aspect of today’s photography landscape, with B-roll, behind-the-scenes videos of photo shoots and requests for photographers to shoot video as well as stills.

But this year some photographers found a way to preserve the conceit of the still image while extending its form to video, in a poetic and absorbing manner by shooting slow motion video—at a thousand frames a second. Magnum’s Jonas Bendiksen made short sequences of celebrating fans at the FIFA World Cup in Brazil and Ross McDonnell created vignettes (effectively photos that came to life) amidst the fire and ice of the protests in Kiev, Ukraine. The images (see Bendiksen’s video above) have a mesmerizing quality extrapolating and magnifying the frozen incidental moment to a absorbing sequence.

Elsewhere Gifs and memes evolved to the more subtle, and sophisticated Cinemagraph to bring the still photo to life in other ways and Instagram embraced the short form video amongst its square format photo stream. But one of the simplest and most effective of executions of still photography to video was realized on The New York Times‘ website coverage of the Indian elections which utilized seven-second clips by Daniel Berehulak shot with a locked off camera of people moving through the frame to bring the photo to life.

Aerial photography has a rich history and holds an innate fascination—from Margaret Bourke White’s mid-twentieth century forays to the skies for LIFE magazine to more recent practitioners in the art of photography from the skies above, notably George Steinmetz and Edward Burtynsky, to the satellite imagery that maps our planet and images by astronaut photographers which shows our beautiful planet from space.

This year, drones—which have been used for surveillance, in war zones and to cover public and sporting events—fully embraced their creative and journalistic potential. We saw drone videos proliferate online but one of the most effective creative uses of drones was done by photographer Tomas van Houtyre. His black-and-white drone photographs of America addressed issues of privacy, drought, inner city plight and farming. Van Houtyre’s Blue Skies series became the longest photo essay to be published in Harper’s magazine, while a new chapter was featured in TIME’s Futures Issue.

A New York Times story which utilized drones (amongst other technologies) to give a new perspective on baseball, and the first drone photography contest organized this year both suggest that this art has more potential. But whether the use of drones becomes a viable everyday option for photographers will depend on the government’s decision to legislate their use or not.

Phil Bicker is a Senior Photo Editor at TIME 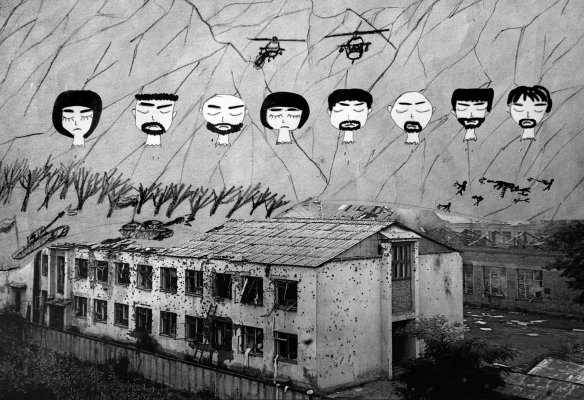 Ways of Seeing: The Contemporary Photo Essay
Next Up: Editor's Pick