For rights advocates in Egypt, the U.S. Senate Intelligence Committee report released Tuesday detailing years of CIA torture was a reminder not only of the country’s past role as a destination for “outsourcing” U.S. torture, but also of a present reality in which Egypt’s security forces continue to use brutal methods on detainees.

Egypt was a key destination under the CIA’s “rendition” program in which the U.S. transferred prisoners to other countries for interrogation. For years the CIA cooperated with the regime of President Hosni Mubarak, including the Egyptian security agencies whose widespread use of torture was one of the hallmarks of the authoritarian state.

In the eyes of human rights activists, the legacy of the CIA’s collaboration with the Egyptian state lives on in widespread accounts of security force abuses. “Today we see more cases of enforced disappearances involving the Military Intelligence and the National Security. These are practices that existed in Egypt before and were used in the extraordinary rendition program,” said Mohamed Lotfy, the executive director of the Egyptian Commission for Rights and Freedoms. “This mistake shouldn’t be repeated.”

The 500-PAGE executive summary report released by the Senate Select Committee on Intelligence on Tuesday redacts the names of the partner countries involved in rendition and torture, but those countries involved have long been publicly identified. The U.S. began rendering people suspected of involvement in terrorism to Egypt in 1995 under President Bill Clinton. According to a 2013 report by the Open Society Foundations, Egypt accepted a U.S. request to join the program in part because it wanted access to suspected members of Al Qaeda.

Rendition expanded massively following the September 11, 2001 attacks. In 2005, Egyptian Prime Minister Ahmed Nazif admitted that “60 to 70” people had been rendered to Egypt, out of an estimated total of 100 to 150. The CIA also sent detainees to Muammar Qaddafi’s Libya and Bashar Al-Assad’s Syria, all autocratic regimes with long records of torture. All three countries would be shaken by popular uprisings in the “Arab Spring” of 2011.

Egypt was the destination for some of the most high-profile cases of extraordinary rendition, according to the Open Society Foundations report. Detainees included Hassan Mustafa Osama Nasr, known as Abu Omar, an Egyptian who had been living in Italy. Abu Omar was picked up on a street in Milan in 2003, then flown to Ramstein airbase in Germany, then to Egypt, where he was detained secretly for 14 months and subjected to electric shocks.

In another instance detailed by the Open Society Foundations report, an Australian citizen named Mamdouh Habib was captured in Pakistan, questioned by U.S. and Australian agents, then rendered to Egypt where he was tortured. In another instance, a pair of Egyptian men seeking asylum in Sweden, Muhammed al-Zery and Ahmed Agiza, were handed to the CIA then flown back to Egypt. In Agiza’s case, CIA agents “stripped him, dressed him in overalls, and chained and shackled him,” according to the report. The Egyptian government had assured Sweden that the two would not be tortured, but both were submitted to electric shocks.

Hosni Mubarak was removed from power in the 2011 revolt that was in part fueled by public outrage at the abuses of the security forces. But the massive police apparatus he oversaw remained intact, and the regime figures and security officials responsible for the use of torture stayed in place. Torture of detainees continued after Muslim Brotherhood leader Mohamed Morsi was elected in 2012, human rights groups say, and after the military deposed Morsi in July 2013.

(Egyptian government officials dispute claims of torture. Though the Interior Ministry has in recent years admitted some violations, it asserts that it holds offending officers accountable and also said it was training police in human rights principles.)

Throughout, opponents of the Egyptian regime expressed dismay at the U.S. role in cooperating with the Egyptian security forces. “Mubarak used the security agencies to continue his rule,” said Mohsen Bahnasy, a human rights lawyer specializing in cases of torture said, “The United States unfortunately did not take a stance against the Egyptian government’s use of torture. The U.S. used Egypt as a bridge,” he said, “sending prisoners to be tortured here before moving them elsewhere.”

The Senate Intelligence Committee report argues that the CIA’s rendition program undermined efforts to compel other countries to change their treatment of detainees. It describes an incident in 2004 when the U.S. Secretary of State ordered the ambassador to an unidentified country to urge that country open its prisons to the International Committee of the Red Cross. At the time, the report states, the country whose name is redacted “was holding detainees being held in secret at the CIA’s behest.”

Since the military takeover in Egypt, an estimated 40,000 people have been detained in a clampdown on opponents of the regime, according to a database maintained by WikiThawra, an initiative of the Egyptian Center for Economic and Social Rights. Former detainees describe beatings, burns, and electric shocks. Amnesty International, Egyptian human rights rights groups, and journalists have also documented the forced disappearance of dozens of civilians held at Al-Azouly detention center in the Galaa military base near the city of Ismailia. The government refuses to acknowledge the facility.

“The CIA and the Egyptian intelligence were cooperating at a time when the Mubarak government was hated and the people revolted against it,” says Lotfy. “The foreign policy of the U.S. has to keep in mind that the stability they want to reach by fighting terrorism in this way is a false stability.” 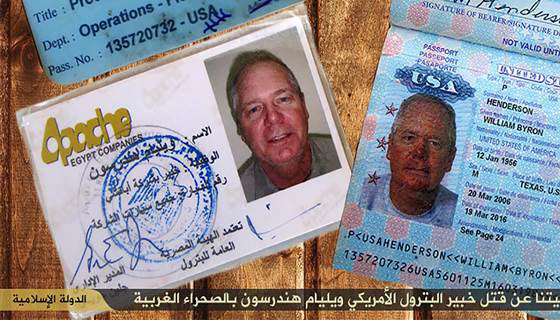