Secretary of State John Kerry testifies on Capitol Hill in Washington on Dec. 9, 2014, before the Senate Foreign Relations hearing on "Authorization for the Use of Military Force Against IS."
Molly Riley—AP
By Karl Vick

The Obama Administration’s policy on Syria is frequently criticized as muddy — for opposing both the regime of President Bashar Assad and a major extremist faction in that country’s civil war, yet mounting military operations only against the latter, the Islamic State of Iraq and Greater Syria, or ISIS. So there was a certain thematic unity in the appearance of Secretary of State John Kerry before the Senate Foreign Relations Committee on Tuesday.

Kerry came to iron out the constitutional authorization for the administration’s military actions against the Sunni militants. Such weighty legal questions are never easy. In theory Congress could declare war, as Republican Sen. Rand Paul insists the Constitution demands. Tuesday’s proceedings, in fact, were sparked by Paul’s effort to attach a declaration of war to a water bill a few days earlier. “The Constitution is quite clear that this responsibility rests with Congress,” Paul told Kerry, nearly three hours into the marathon hearing.

But as Kerry pointed out in reply, the last time Congress declared war was for World War II. Conflicts since then have been authorized by other legal mechanisms, such as the War Powers Act, passed after the Vietnam War dragged on for more than a decade. The wars in Afghanistan and Iraq went forward from separate Authorizations for the Use of Military Force, passed in 2001 and 2002, respectively. The White House maintains that those measures also authorize military action against ISIS, which has been going on since August in Iraq, and since September in Syria. So what was Kerry doing at Tuesday’s hearing?

Being diplomatic, apparently, as befits a Secretary of State. President Barack Obama has said that although he doesn’t really need a new authorization, a buy-in on any sustained military action makes good political and constitutional sense, and so he would welcome a measure specifically naming ISIS, or ISIL, as U.S. officials refer to the group. But as Foreign Relations Committee members complained at length, the White House has failed to provide language for such a bill. “The reason we’re here is a total failure of the President to lead on this issue by sending anything up here,” said Sen. Bob Corker, the Tennessee Republican who serves as ranking minority member, but will become chair next year, when the GOP becomes majority in both chambers. “And we all want the same thing.”

Not exactly, Kerry said: From the administration’s point of view, the measure written by the Democratic Chairman, Sen.Robert Menedez of New Jersey, is a good starting point. But the President would rather remove language that limits the circumstances under which he could send ground troops into action — even though Obama has repeatedly stated ground troops will not be used against ISIS, except to train the Syrian and Iraqi forces that should do all the fighting. “I don’t think anyone wants to get into a long-term ground operation here,” Kerry said. “But we also don’t want to hamstring our generals.” The White House has not produced specific language it desires, however, perhaps to avoid headlines suggesting Obama wants to keep boots on the ground as an option.

Whatever the reason for the reticence, it irks members of both parties. “If he wants authority to win the fight, he’s got to tell us what the fight looks like,” said Sen. Marco Rubio, the Florida Republican. Christopher Coons of Delaware, a Democratic Senator, complained the White House was turning its back on support from its own party: “We can’t go home and defend what the strategy is.”

The entire exercise, in a Lame Duck session, was academic at worst, and at best a dress rehearsal for the new year, when the Republicans will take control and — given the hawkish tenor of the GOP members — likely give Obama all the freedom he asks. Except for Paul, who scolded the administration on strict constructionist grounds, the harshest words were from Sen. John McCain, who called the hearing “kind of a charade.” The Arizona Republican stormed out after refusing to concede Kerry’s suggestion that more moderate Syrian rebels the administration has promised to arm are not, in fact, being left to die — owing, Kerry hinted, to secret measures that could not be discussed in a public setting. “More is being done, and more is being done than I can talk about in this hearing,” he said. 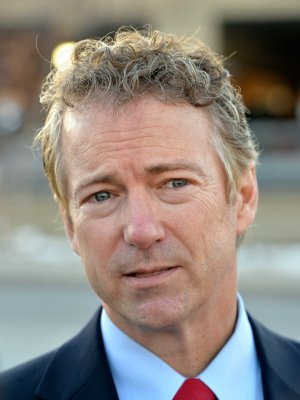 Rand Paul Wants to Declare War Against ISIS
Next Up: Editor's Pick